A technique first described back in the 1960’s, differential scanning calorimetry (DSC), is still a mainstay of drug-polymer miscibility analysis in most pharmaceutical research groups. Now, a new microscopy-based imaging method – thermal analysis by structural characterization (TASC) – has been demonstrated to save time, improve sensitivity, and significantly reduce the amount of material required for drug-polymer miscibility analysis.

What is the problem?

A well-known challenge faced by drug formulation scientists is poor drug solubility in aqueous solutions. This affects 60-70% of potential drugs1, both with new small molecule candidates and generic pharmaceutical compounds.

Achieving a homogenous system by improving drug solubility is a key goal, in order to ensure:

One promising technique used to improve solubility is the development of an amorphous solid dispersion (ASD) – a formulation where a polymer is used to stabilize the amorphous form of the drug. There are alternative approaches – including physical and chemical modifications of the drug molecule, reducing particle size, crystal engineering, salt formation, the use of surfactants, and complexation – however, in recent decades, ASDs have become the most common formulation strategy. A body of evidence has grown that suggests ASDs significantly and reliably improve the absorption of some poorly soluble drugs in comparison to the crystalline form of the drug2.

As noted above, the role of the polymer in an ASD formulation is to stabilize the amorphous form of the drug; acting as a functional excipient that reduces its molecular mobility and prevents it from crystallizing. In this way, a matrix is created in which the drug can be dispersed.

To formulate such products successfully, the drug needs to be highly miscible with the polymer, and “drug–polymer miscibility” is a critical parameter that has been shown to affect, for example, physical stability during storage, and dissolution rate of the final formulated product3.

The prediction of drug–polymer miscibility using theoretical considerations has been widely reported, and many experimental screening methodologies have been developed to assess individual drugs. However, the pre-formulation stage of screening suitable polymers is often a lengthy process, and the common analytical approach using DSC, although reliable, has several drawbacks in routine use. It is time-consuming, and the accuracy of the estimation of miscibility is extremely dependent on the heating rates.

In the field of pharmaceutical research, there remains a clear need for a rapid and sensitive analytical approach that can be applied early in the drug development process – where the amount of drug material is often severely limited.

Thermal analysis by structural characterization (TASC) is a new thermal technique based on image analysis combined with hot-stage microscopy (HSM, also called thermo-microscopy). TASC was developed in collaboration with Mike Reading, professor in the Department of Chemical Sciences at the University of Huddersfield, UK, and the inventor of the technique. This technique was first described in the literature in 20174.

Subsequent studies carried out with a team in the School of Pharmacy at the University of East Anglia in Norwich, Norfolk, UK, reported how TASC could be successfully applied to estimating drug-polymer miscibility and screen drug-polymer combinations. In this work, TASC was used in direct comparison to DSC to investigate changes in the features of crystalline drug particles on a thin layer of the polymer as they are heated in a linear fashion under the microscope, and melted on to the polymer of interest.

All experimental work was conducted using a motorized heating/freezing stage, connected to an imaging station equipped with reflective LED light source and a 10 x magnification lens. The stage is motorized in X and Y directions, with micro-stepped motors giving micron-repeatable position resolution and position recall. This means that a sample can be mapped, and positions of interest located so that temperature-controlled experiments can then be carried out at those points. A summary of the experimental workflow, the images generated and two example traces – one for a polymer with good miscibility and one for a polymer that is immiscible – are shown in figure 1 below. A complete description of the experimental protocol and a full discussion of the results has been recently published5,6. 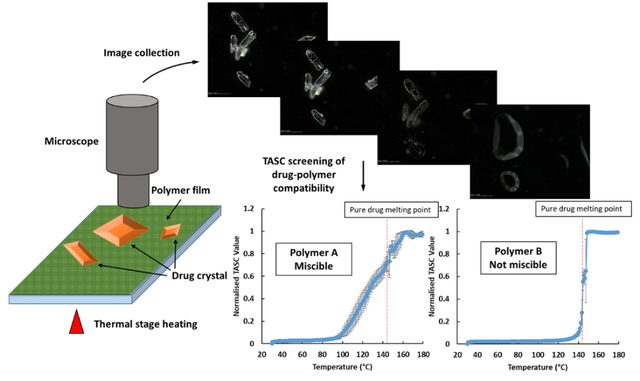 For drug molecules that are candidates to be formulated as ASDs, the new, rapid drug-polymer miscibility screening method based on TASC outlined in this short article can give scientists the ability to eliminate unsuitable candidate polymers quickly. When compared to conventional DSC methodology for detecting melting point depression, it is significantly faster, more sensitive and provides actionable data from significantly less drug. TASC looks set to become a standard screening test in early drug development labs.