Food contamination is not a new issue; this is why food producers take care to perform risk assessments and to keep their operations as hygienic as possible. But in recent years, the rise of a new class of contaminants has become a major concern to the industry.

These emerging contaminants, also known as contaminants of emerging concern,1 can enter the water supply and food chain through industrial wastewaters2 and include the likes of medicines, personal care products, agricultural chemicals and microplastics. These compounds were not designed to be ingested with foods in this way, and as a result, their effects on human and animal health are generally not yet well understood and potentially dangerous.

Given the potential risks presented to consumers, an increasing number of these contaminants are now routinely screened for in the food industry. Today, this is predominantly done with the aid of mass spectrometry (MS) techniques, such as high-resolution mass spectrometry (HRMS) or tandem mass spectrometry (MS/MS), but scientists are continuously trying to develop new and improved methods to deal with these emerging risks.

Two exciting developments currently being investigated are the application of new MS methods and the development of electrochemical aptamer-based biosensors for the rapid and inexpensive detection of emerging contaminant residues.

MS is an extremely sensitive analytical technique, meaning that emerging contaminants present at even the parts per trillion level can be detected effectively. As a result, HRMS and MS/MS methods have become widely used for emerging contaminant screening.3

“For HRMS, one of the key advantages is that a sample can be retroactively analyzed, and so there's no need to have some sense of what the target compounds are ahead of time. So long as the fragments and empirical masses are determined, one can piece together the puzzle of what contaminants are in the material,” said food scientist, author and food industry consultant, Dr. Bryan Le.

But while these methods are effective, they are still open to improvement. Methods had previously tended to focus on only one class of contaminant at a time, making it difficult to study multiple potential risks. Given the sheer chemical diversity of the emerging contaminants, there is a real need for a more “universal” analytical method that can detect a wider scope of potential contaminant residues in a single run.

In 2008, Mol et al.4 developed the first comprehensive method that was capable of combining the screening of several substance classes within one analytical procedure. Development of multi-class methods has continued, culminating in the publication of a paper in Analytical and Bioanalytical Chemistry5 earlier this year that describes a multi-class approach capable of covering over 1000 unique substances in a single analytical run.

This method used liquid chromatography with tandem mass spectrometry (LC-MS/MS) to study over 1000 compounds in 2 cattle feed matrices and was internally developed and validated by researchers at the University of Natural Resources and Life Sciences, and the Austrian Competence Center for Feed and Food Quality, Safety and Innovation. In the interest of minimizing the workload associated with the method, the researchers chose to use a simple “dilute and shoot” sample preparation method.

“Chemical contaminants are the most suitable for [screening with] this technology, for this MS approach, and there are a lot of potential uses,” said Dr. Angela Anandappa, founding director of the non-profit Alliance for Advanced Sanitation and an instructor in food science and risk assessment at Northeastern University.

“I’m hoping we will see lots more reference points for pesticide residues and similar contaminants that can be monitored through this technology. In all these cases, it’s important for us to use the latest tools and reference standards so that new and emerging food safety risks can be better identified and classified before announcements of success can be made.”

Indeed, further development and refinement of such multi-class methods will be needed before this technique is likely to challenge traditional MS/MS and HRMS in the average testing laboratory. For example, the researchers behind the new Analytical and Bioanalytical Chemistry paper also report current issues with “overwhelming data management” in some analytical runs. But with further validation, the research group believes that implementing sensible performance guidelines on this issue could open the door to new possibilities for simultaneous contaminant detection.

Positioning Your Food and Beverage Testing Lab for Success 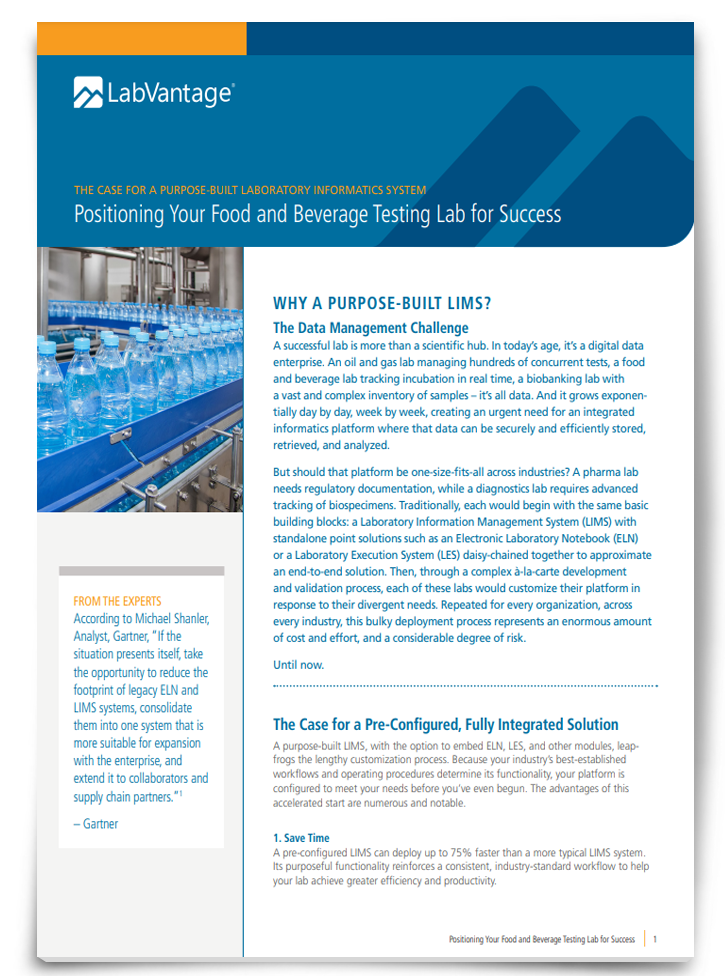 Food and beverage labs ensure the safety of our global food supply chain. They test a wider variety of products, using a more diverse set of test methods, than almost any other kind of lab. To keep pace, they need an informatics platform that operates just as uniquely and as consistently as they do. Download this whitepaper to discover how a LIMS can schedule and monitor microbial testing, maintain compliance and capture results from numerous instruments.

Other avenues for innovation in food testing have moved away from the MS approach altogether.

Antimicrobial residues are one of the emerging contaminant classes most relevant to the food industry. This kind of contamination tends to affect animal-derived food products in particular, due to the use of antimicrobials in animal rearing. These are typically screened for using physicochemical techniques such as LC-MS/MS, but can also be detected using immunological tests (e.g., enzyme-linked immunosorbent assay (ELISA)) or microbiological plate testing.

Biosensors have recently emerged as a new avenue for development to overcome some of the limitations of these existing methods. While microbiological techniques are inexpensive, they can lack sensitivity for some types of antimicrobial drugs. Immunological assays are quick and sensitive to a broad range of antimicrobials, but the cost of this testing can grow dramatically as the number of antimicrobial families for which screening is required rises. Techniques such as LC-MS/MS offer the best sensitivity but are extremely costly. Researchers in the field believe that effective biosensors could represent a cheaper, portable testing solution that still retains good sensitivity.

Electrochemical aptasensors6 are one of the major technologies being proposed for this purpose. These are a class of biosensor that utilize an aptamer – the name given to a single-stranded DNA or RNA molecule – as the recognition element of the biosensor. This aptamer can easily be modified chemically to ensure a good affinity for the target molecules in question and can be functionalized further with nanomaterials to improve a variety of performance characteristics, including sensitivity and stability.

“Much of the research has been concentrated towards diagnostic uses in the medical field, and so the technology is not yet in standard practice for food applications and there are no large-scale commercial manufacturers for aptamer-based sensors used to detect food contaminants. However, aptamers are more cost-effective than antibody-based sensors and would be valuable for the on-site detection of contaminants. They are a promising new technology that will drive down the cost of ELISA-like assays that use aptamers in lieu of antibodies as the binding platform.”

A recent scientific review7 of electrochemical aptasensors for antimicrobial screening in food products found numerous instances where proof-of-concept devices were able to detect and quantify antimicrobial drugs effectively in a given sample. Detecting the use of widely banned antibiotics (such as chloramphenicol8) appears to be an area of particular interest,7 as it is crucial to avoid false positives in these cases. The specificity of the electrochemical aptasensor could be used to great advantage here.

The review also highlights a few areas for future improvement. Most crucially, these sensors still need to be tested on more real-world samples. There were several studies found in the review that reported methodologies able to test milk samples effectively,9 but the technique still needs to be proven to be useful for testing solid foods. Additional validation assays must be carried out before these electrochemical aptasensors can be considered more than a proof-of-concept. Still, from the existing literature, it is clear that this technique holds a lot of potential promise for the future.

The use of pesticides in industrial farming, antimicrobials in animal rearing and the general use of personal care products and medicines is an inescapable necessity in modern life. For so long as this is the case, it is crucial that scientists have the capability to test for traces of these compounds as contaminants in food effectively. Multi-class MS and the development of cheap yet sensitive biosensors are just two of the avenues currently being explored by scientists to combat the threat presented by emerging contaminants, but it is hugely encouraging that both techniques show considerable promise for the future.

7. Gaudin V. Contribution of Nanomaterials to the development of electrochemical aptasensors for the detection of antimicrobial residues in food products. Chemosens. 2021;9(4). doi: 10.3390/chemosensors9040069

8. FAO urges countries to discontinue the use of chloramphenicol in animal production. Food and Agriculture Organization of the United Nations. http://www.fao.org/asiapacific/news/detail-events/en/c/47419/. Published January 24, 2002.

Alexander Beadle
More from this author >
Advertisement
Chosen for You
Webinar