Many commercial techniques exist for solid sample analysis, and the best choice depends on the analytical requirements. Techniques range from inexpensive, portable methods for bulk analysis to costly, large, complicated devices for high-resolution measurements. Each technique has known technical limitations like matrix suppression, spectral ambiguity, and calibration challenges. Not only are high-resolution instruments costly to operate and maintain, they also require complicated sample preparation and matrix-matched standards. Such processes involve a highly skilled, trained operator.

For years, cost and instrument limitations have prohibited many commercial applications of mass spectrometry, but now, a breakthrough in laser ablation laser ionization (LALI) technology has overcome many of these challenges as well as improved technical capabilities. At the same time, its simplified operational process decreases the complexity and costs normally associated with other high-resolution analytical methods. LALI has been discussed in peer reviewed literature for some time,1,2,3 but was unable to commercialize due to computing and laser limitations. Recent advancements in both of these fields has facilitated the commercial application of LALI for mass spectrometry.

As the name suggests, LALI uses two separate lasers to first ablate (or desorb, in the case of organics) material from the surface of a solid sample and then ionize that material in a second discrete step. By analyzing solid samples directly, LALI eliminates intricate dissolution/digestion sample preparation procedures that complicate other techniques. The initial ablation (or desorption) process results in both a temporal plasma and a neutral particle cloud. After a short delay to allow primary ions formed by the initial plasma to disperse, a second laser oriented parallel to the sample’s surface ionizes material from within the neutral particle cloud. In traditional mass spectrometry, primary ablation ions experience a high degree of elemental fractionation that is extremely matrix-dependent, whereas the neutral particle cloud is much more representative of the sample’s actual composition. Thus, compared to other plasma-ionizing techniques, targeting neutral particles with the LALI method greatly reduces the matrix effects4.

After ionization, the particles move through a series of ion optics and two quadrupoles. From here, a time of flight (TOF) mass filter measures the time required for each ion to impact a detector, creating a complete mass spectrum. From loading the sample to reading results, the operator waits less than five minutes. Overall, LALI-TOF-MS minimizes matrix effects, has lower detection limits, requires less sample preparation, and simplifies calibration compared to other solid sample analysis methods. Additionally, because the first laser can either ablate or desorb solid material, it can analyze both inorganic and organic samples in the same analytical session.

Recently developed, the first commercial LALI-TOF-MS benefits from advances in software, user interfaces, and cloud computing. As a result, it requires minimal training to operate its intuitive software. Its innovative technology enables a compact, all-in-one instrument. Because this package fits on any desktop, it brings mass spectrometry to facilities and fields that previously could not accommodate laboratory equipment. By simplifying solid sample analysis, LALI-TOF-MS benefits any industry that requires reliable, trace-level quantitation. A few of the technology’s applications are pharmaceuticals, food and beverage, cannabis, and manufacturing. 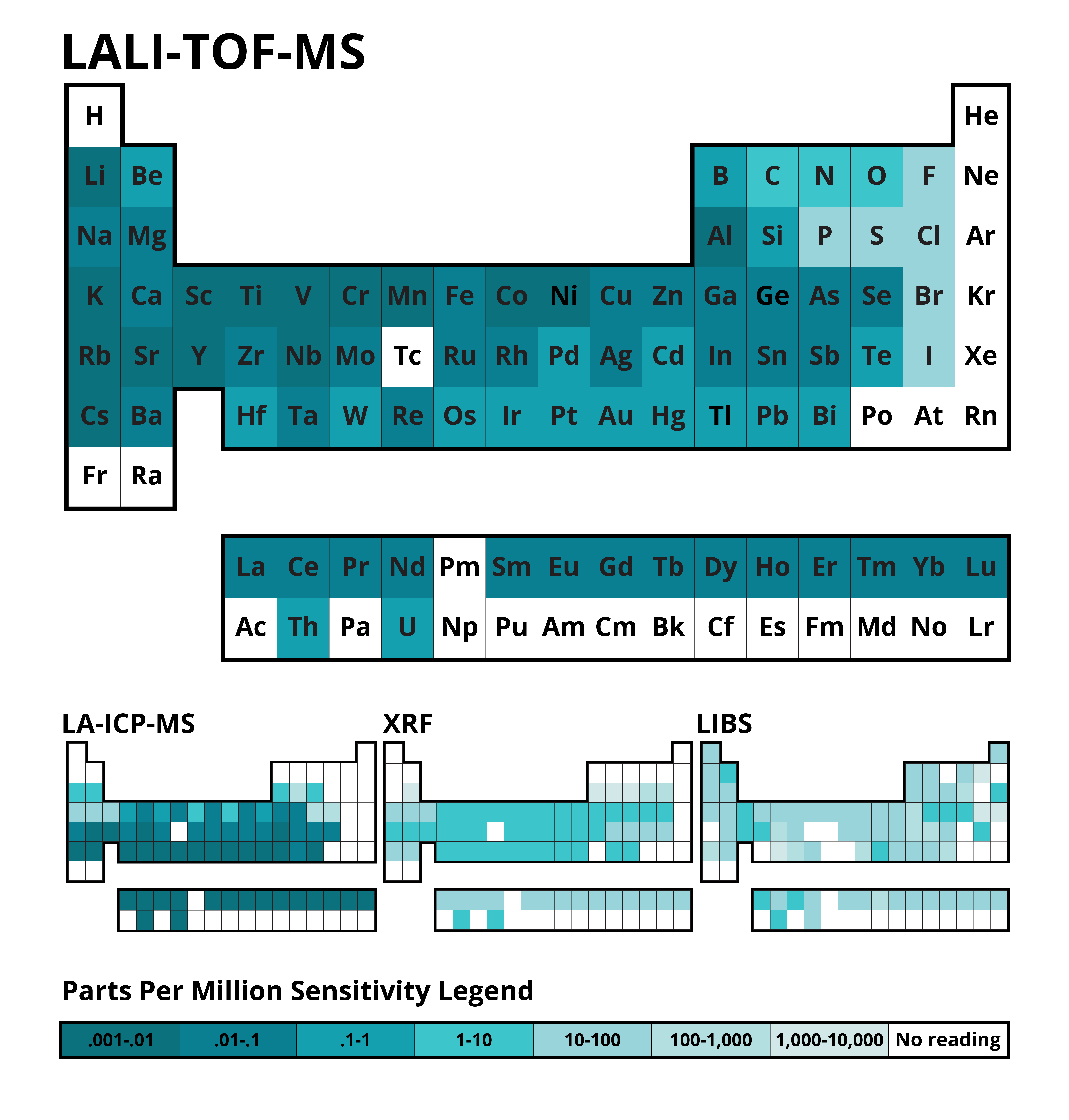 For LALI, detection limits for most elements range from ~1 to 100 ppb (parts per billion) or ~0.001 to 0.1 μg/g. Compared to the detection limits by XRF and LIBS, most of which range from ~1 to 100 ppm (parts per million), LALI’s limits of detection are approximately three orders of magnitude lower, which are similar to the detection capabilities of LA-ICP-MS. XRF and LIBS are often significantly less expensive than LALI-TOF-MS and LA-ICP-MS. Thus, for industries that require only 100-ppm resolution, these methods are appropriate.

On the other hand, many industries require lower detection limits, either due to legal restrictions or their own internal quality control standards. For example, the pharmaceutical industry follows United States Pharmacopeia (USP) guidelines, which define the concentration limits of elemental impurities. Concentration limits for most elements range from 100 ppb to 10 ppm5. To ensure the safety of its consumers, drug producers must choose an analytical technique with appropriate detection capabilities.

Building upon previously published evaluations, operating costs were compared among the highest-resolution techniques for solid sample analysis: LALI-TOF-MS, ICP-MS, and ICP-OES (inductively coupled plasma - optical emission spectrometry). This cost comparison is not entirely comprehensive. For instance, it does not include the purchase price for each instrument; nor does it incorporate sample preparation. For LALI-TOF-MS, sample preparation may include grinding solid material into a powder and pressing it into a pellet, or simply polishing to obtain a smooth surface. On the other hand, ICP-MS and ICP-OES involve much more intricate dissolution and/or digestion processes. As shown in Figure 1, detection limits for LA-ICP-MS are most comparable to those of the new LALI-TOF-MS; however, estimating the total costs of the ICP-MS instrument, the additional ablation chamber, and various auxiliary components for LA-ICP-MS are beyond the scope of this article. Thus, the following comparison of techniques is presented.

For most spectrometry instruments, major operating costs include gases, electricity, and consumable supplies. Assuming each instrument runs 1,000 hours per year, Thomas calculated operating costs for ICP-MS, ICP-OES, and two other techniques6. Using the same assumptions, the operating cost for LALI-TOF-MS were calculated, and publicly-available salary data to add the operator to the calculation was applied. Because LALI-TOF-MS requires little calibration or training, a technician can easily operate it. Contrarily, the more complicated operation of ICP-MS involves PhD-trained personnel, and ICP-OES operator costs were based on the typical salary of a senior-level technician. 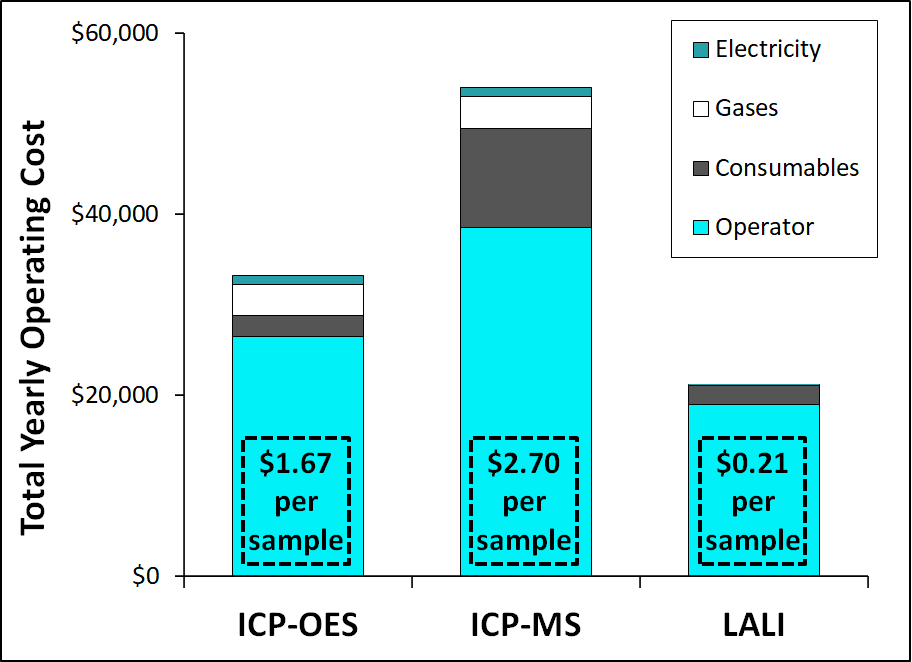 For many regulated industries and quality control applications, instruments with low detection limits (i.e., 10–100 ppb) are critical. Such limits are required for health, safety, and overall product effectiveness in the pharmaceutical, food and beverage, cannabis, and manufacturing industries. Combining the necessary detection capabilities with reduced operational challenges, LALI-TOF-MS improves efficiency for these and many more applications. With the intuitive operation of its all-in-one system, mass spectrometry is now more accessible.

6. Thomas, R. (2016). Money to Burn: Do you Know What it Costs to Run your Atomic Spectroscopy Instrumentation? Mass Spectrometry & Spectroscopy, 18-19.

Complete the form below to unlock access to this Audio Article: "How New Technology Is Simplifying Solid Sample Analysis"