Those involved in the production, processing and distribution of food know that food safety is not an issue to be taken lightly. There are important regulations that need to be followed to ensure that food products are compliant with safety levels for various toxins and infectious agents. Of note, mycotoxins in food are subject to strict legislative limits set by the Food and Drug Administration in the U.S. and the European Commission in the E.U.

Mycotoxins Are a Hazard to Human Health

Mycotoxins are toxic secondary metabolites of certain fungal strains (e.g. Aspergillus, Penicillium, Fusarium), and are particularly dangerous because they are considered carcinogenic1 and immune-suppressive.2 As mycotoxins are naturally-occurring and frequently produced in many agricultural environments, their accumulation in foods and feeds presents a major threat to human and animal health.

“There are many situations during the production of maize and wheat, where it is of imminent interest to monitor any potential mycotoxin contamination,” says Professor Boris Mizaikoff, Director of the Institute of Analytical and Bioanalytical Chemistry, Ulm University, Germany. “Before harvesting, it’s important to identify mycotoxin ‘hot-spots’ on the field to avoid spreading and subsequent contamination of the entire harvest. During storage, fungi proliferate and may affect all stored crops.”

Additionally, the presence of mycotoxins can cause significant economic losses to food business operators.3  Due to all these reasons, it is important for food manufacturers and distributors to regularly test their product and ensure that mycotoxin levels are within safety limits. Checking for these toxins typically involves taking several representative samples from a given batch and sending them to a certified lab for analysis. This should happen at multiple points in the supply chain, including when raw commodities are received, during storage and before shipment - ideally at the port. However, despite years of research, rapid on-site mycotoxin analysis has been an issue in the food industry.

Mycotoxin Testing Can Be Complicated

“For these rather elaborate sample preparation techniques, usually an advanced laboratory facility is needed, along with highly qualified personnel,” explains Mizaikoff. “Therefore, this type of testing instrumentation is comparatively expensive to buy, operate, and maintain, and also fairly impractical for the purpose of rapid on-site analysis by importers, traders, and food and feed companies.”

In some cases, commercial screening kits based on enzyme-linked immunosorbent assays (ELISA) are applied in lieu of the more labor-intensive chromatographic methods. ELISAs have become routine tools in rapid mycotoxin monitoring scenarios, especially when screening raw materials.4  However, Mizaikoff adds that “the performance metrics of ELISA tests are frequently matrix-dependent, and thus potentially overestimate the mycotoxin levels.”

“With an effective portable method for rapid on-site testing, new procedures can be established that require further analysis of only positively-tested samples,” Mizaikoff further explains. “Our IR spectroscopic analyzer for mycotoxins, called MYCOSPEC, has this capability, and can significantly reduce the laboratory analysis overheads.”

Mizaikoff’s research team at Ulm University in Germany, together with national and international collaborators, developed a new sampling procedure that uses infrared spectroscopy with attenuated total reflectance (IR-ATR), and a novel thin-film waveguide technology, termed MIRa-Guide.5 This new spectroscopic technique can be used to analyze mycotoxin contamination in food stuff such as maize and wheat at EU regulatory limits. The MYCOSPEC analyzer and MIRa-Guide waveguide combination is tailored towards optimized IR-ATR analysis with laser light sources such as quantum cascade lasers (QCLs) and interband cascade lasers (ICLs), as well as optical parametric oscillators (OPOs), and frequency combs.

“One of the main advantages of QCL-based IR spectroscopy is that the spectral resolution is not limited to the dimensions of the device, as opposed to Fourier transform-infrared spectroscopy (FT-IR), where the resolution depends on the length of the path the moving mirror has to travel within the interferometer,” says Mizaikoff. “Also, the energy density per wavelength is significantly higher, yielding improved signal-to-noise ratios (SNRs).”

This aspect of the MYCOSPEC technology is crucial, as it allows Mizaikoff’s team to construct an IR analyzer system with drastically reduced dimensions. The entire analyzer system may be tailored to the size of a sheet of A4 paper or even smaller (i.e., hand-held), while still maintaining the high spectral resolution, sensitivity, and molecular discrimination. 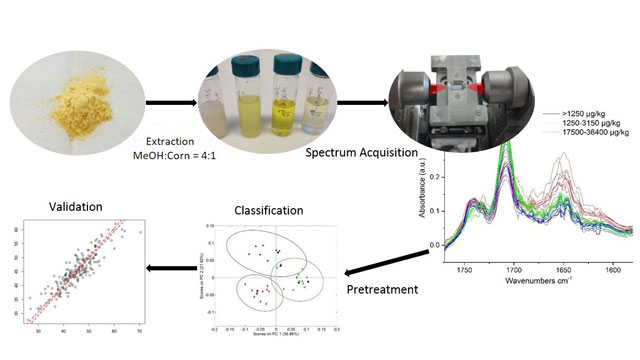 Figure: Schematic diagram showing the measurement procedure for solid commodities, e.g. corn, wheat and peanuts. The ground commodity is extracted and a minute sample of the extract is applied to the waveguide surface. After letting the solvent evaporate, the spectra are recorded. Via multivariate statistics, i.e. principle component analysis (PCA), the samples are analyzed and assigned to be either above the EU-limits (contaminated) or below the limits (uncontaminated). Image adapted from published articles.3, 6

“A significant advancement of practically useful QCL-based IR spectroscopy was the introduction of GaAs/AlGaAs thin-film waveguide structures by our research team,” adds Mizaikoff. “These structures can be tailored to achieve the required sensitivity for a certain IR wavelength regime, and thus, a specific set of analytes.”

The sensitivity achievable with the MYCOSPEC approach is due to a combination of quantum cascade lasers (which are among the most advanced light sources currently available in the mid-infrared spectral regime) and single-mode thin-film waveguides.3, 4

Using thin-film waveguides has several benefits. “The fraction of the evanescent field emanating from the waveguide surface and penetrating into the adjacent liquid or solid sample can be tailored with regard to the analytes of interest simply by changing the structure of the waveguide,” explains Dr. Markus Sieger, one of the developers of the MIRa-Guide technology. “This enables ‘designing’ the desired sensitivity and SNR. Another significant advantage is the size of the waveguide chip; it’s small enough to facilitate investigating minute sample quantities and allows us to produce highly portable, hand-held systems for fast on-site testing.”

In a paper published last year, Mizaikoff’s team showed that the portable MYCOSPEC technology is able to differentiate between contaminated and uncontaminated samples at EU regulatory limits, even when the contamination levels were below the limit of detection of the LC-MS/MS reference method.3

Collaborative Development of the MYCOSPEC Technology

Sieger, who was also the lead author of the paper, notes that “the number of contaminated vs. uncontaminated peanut samples available for testing was rather small, and further studies need to be done to substantiate these capabilities.” It is likely that the predictive reliability of the MYCOSPEC method will improve as more cases are included in the reference data set.

“The more samples with known mycotoxin levels that are available for recording their IR signatures, the better the classification model gets and the more reliable the predictions will be,” adds Sieger. “One way to solve this problem is to collaborate with major commodity producers and distributors to develop a database for concentration levels.”

Analysis of food samples using MYCOSPEC is a quick process. While the technique does not identify individual mycotoxins, it rapidly classifies samples as contaminated or uncontaminated. This renders the technology attractive for users involved within the production and fabrication chain of food and feed. “Especially in seaports or other import-related scenarios where waiting on a decision is costly, rapid identification of a contaminated lot would recoup the investment for a MYCOSPEC analyzer immediately,” says Mizaikoff.

His team is currently working on further reducing the dimensions of the device without sacrificing performance metrics and expanding its usage into other applications such as clinical bio-diagnostics.

Complete the form below to unlock access to this Audio Article: "Making Laser Spectroscopy Portable for On-Site Food Safety Tests"