With greater resolving power, analytical speed, and accuracy, new mass spectrometry technology and techniques are infiltrating the biopharmaceuticals workflow, from applications in biomarker identification for new drug target discovery, to validation of molecular activity, and downstream in manufacturing and quality control. The rapidly growing biosimilars industry is also leveraging the analytical capabilities and increasingly automated and easy to use MS systems designed for biopharma applications.

For analyzing biopharmaceuticals -- proteins, peptides, monoclonal antibodies, and nucleic acid-based therapeutics -- the industry workhorse from a mass spec-based perspective has been electrospray ionization (ESI) MS. ESI quadrupole-time-of-flight (QTOF) MS is a well-established technology for various biopharma applications, notes Bob Galvin, PhD, Vice President of the Biopharma Business Unit at Bruker Daltonics. However, whereas ESI instruments are better for some tasks, he states that "MALDI systems are becoming increasingly relevant and can solve some complementary  analytical bipharma problems that ESI cannot."  As examples, Dr. Galvin describes MALDI workflows for full sequence confirmation and post-translational modification (PTM) analysis of a monoclonal antibody (MAb) subunits formed by IdeS digestion, which are approximately 23-27 kDa or the determination of disulfide bond scrambling that often occurs in MAbs.

A bottom-up approach is often employed to analyze the structure of a complete 150-kDa MAb, using trypsin digestion to break the molecule into smaller peptides, typically up to 6 kDa. Tryptic digestion can induce artifact formation such as deamidation or scrambling, making it difficult to deduce an accurate picture of the original MAb from the peptides.

To overcome these challenges, he says, scientists are moving to a workflow that combines ESI-QTOF MS with the use of enzymes that produce fewer fragments from a digested MAb fragment, such as the FabRICATOR® enzyme from Genovis AB. It cleaves an IgG molecule at the hinge region, where the heavy and light chains meet, producing three fragments: the Fc/2, Fd, and LC  fragments. The enzyme does not introduce any artifacts.

Bruker's maXis II ETD QTOF system with Electron-Transfer Dissociation (ETD) capabilities has the resolving power and accurate mass at online liquid chromatography speeds to analyze a 27-kDa subunit formed and to find the monoisotopic mass, according to Dr. Galvin. "Determining the monoisotopic mass of all of the three MAb fragments goes a long way to suggesting you have the right structure," he states. Additionally, whereas top-down proteomic approaches that combine ETD and CID fragmentation information can obtain about 80% sequence coverage of each fragment, using complementary MALDI-TOF/TOF MS "we can nearly always validate 100% of the sequence of each fragment," says Dr. Galvin.

Furthermore, a system that can determine monoisotopic molecular weight can also detect small, but important changes down to below  1 mass unit within the 27 kDa subunits. Biopharma companies can use this capability to monitor changes occurring within the MAb, such as quantifying the degree of deamidation. "Deamidation is a very important critical quality attribute because it affects efficacy and stability, and hence the shelf-life of a product," adds Dr. Galvin.

Deamidation screening – spectral interpretation based on averaging scans acquired at the front and tail of Light Chain doublet from HPLC separation. Dmass = +0.992 Da

Another challenge in MAb analysis is determining the number and position of disulfide bonds -- and monitoring changes in the disulfide bond pattern over time and under different storage conditions. MALDI technology can do the analysis better, faster, and more cost-effectively, contends Dr. Galvin. "With MALDI, because of a characteristic signature ion that all disulfide peptides exhibit in their MS spectra, you do not need any  prior knowledge of where scrambled disulfide bonds will appear. As disulfide detection is based on these signature patterns and full MS/MS information provides for reliable identification, the software automatically screens the LC-MALDI dataset to identify disulfide-bonded peptides and to provide a quantitative picture of disulfide scrambling," he says. Additionally, "the industry is just beginning to recognize that some disulfide bonds are reforming as trisulfide bonds." Although available instruments cannot detect these automatically, MALDI-TOF/TOF systems such as Bruker's new rapiflex TOF/TOF can be used for manual identification of trisulfide bonds. 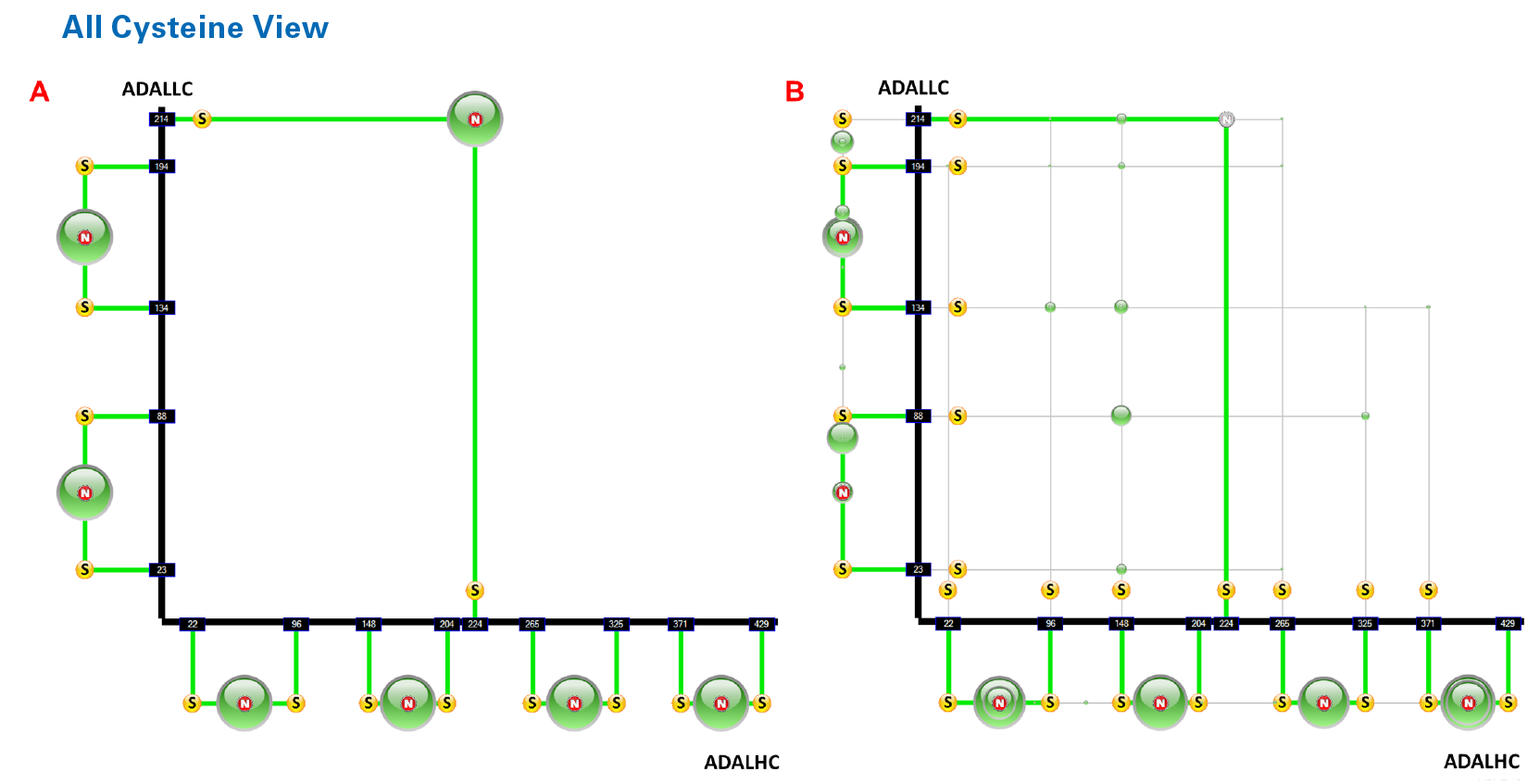 A) Graphical representation of the native bonds of adulimumab. The size of the circle represents the relative intensity compared to all DSBs. An “N” in the circle shows it is a “native” bond.
B) Adulimumab bonds after treatment of 70 degrees C for 30 minutes. Note the DSV scrambling.
Biosimilars Demand Intensive Characterization

The race to develop biosimilar drugs has captured the attention of biopharma companies  in countries worldwide and is catalyzing growing interest in MS technology, not only in the Western world but increasingly in developing regions as well, John Gebler, Ph.D. Director of Biopharma Business Development at Waters, tells us. From a workflow standpoint, even though companies such as Waters can offer an essentially end-to-end LC-MS workflow, the technology is still rather sophisticated and requires a certain skill set to use effectively.

"There is a desire [among our customers] to simplify the ability to run this technology," he says. Overall, customers are telling Waters that they want to use MS as a tool to get the answers they need. They are mainly interested in the results and not necessarily in more features and options or the ability to intervene in the automated workflows and perform higher level functions. One of the biggest bottlenecks they are facing is how to interpret and make use of the huge amounts of data modern MS samples can generate. Together with a desire for more automation to reduce manual intervention and human error and to ensure a well-defined workflow, "there is an expectation that the informatics will be there to interpret the data at the back-end," says Dr. Gebler.

The development of a biosimilar requires extensive analytical characterization of both the innovator product and the biosimilar. MS techniques can be used to obtain direct measurements of complex biopharmaceuticals such as peptides. The MS data support sequence confirmation, structural analysis (e.g., number and location of disulfide bonds), and identification and quantification of post-translational modifications (e.g., glycosylation patterns). Dr. Gebler describes this area as "a moving target," in part due to the continuing evolution of the technologies and changing regulatory requirements as authorities gain more experience with biosimilar drug submissions. Furthermore, developers of innovator drugs modify and improve their manufacturing processes throughout the lifetime of a drug, at least in part to make it more difficult for the biosimilars industry.

"The menu of what people consider to be critical attributes is growing," says Dr. Gebler. More intensive characterization of drug compounds and the identification of more, and more diverse, critical attributes that must be met in manufacturing, can improve the reproducibility of the manufacturing process. It can also help companies strengthen the intellectual property surrounding an innovator drug and offer greater protection against competition from biosimilars. The more intensive characterization of biopharmaceuticals enabled by MS technology is helping to fuel this trend.

Dr. Gebler also describes the trend toward increasing use of MS technology in the QC stage of biopharma manufacturing. "Companies are getting really good at watching and controlling their processes, but they struggle with how to look directly at their product," he says. With the trend away from batch processing to continuous manufacturing, companies want to be able to monitor their product in as close to real-time as possible -- and to look at multiple attributes in each sample.

"The use of MS in QC is a hot topic," Dr. Gebler says, " there is a very healthy discussion going on in biopharma now about what level of MS is needed -- a simple or high-resolution system -- and what information is desirable and meaningful,"  in terms of understanding and improving the manufacturing process. This is especially relevant for biosimilars, he explains, because there is currently no clear definition of "similar," or of how a biosimilar can differ from the innovator product.

MS technology is playing an increasingly important role in the identification and validation of biomarkers for use in biopharmaceutical drug development. Biomarkers are being used to drive the discovery of new drug targets, to confirm the activity of targeted molecules, detect off-target effects, and monitor therapeutic response. They are also becoming a critical tool in clinical research to aid in selecting patients for clinical studies, understand drug response, and develop personalized therapies for precision medicine.

Agena Bioscience™ describes a variety of genomics-based applications of its MassARRAY® System for performing MALDI Tof MS, including for cancer profiling of solid tumors and liquid biopsies, in pharmacogenomics for testing ADME genes and assessing risk of drug-induced complications, and in clinical research. In pharmacogenomics, for example, MS offers an alternative to microarrays or next-gen sequencing for genotyping to identify single nucleotide polymorphisms (SNPs) associated with greater likelihood of sensitivity or resistance to a drug compound. Chen et al. used the Agena Bioscience MassARRAY System for genotype analysis of samples from patients with non-small cell lung cancer to detect 13 SNPs in eight genes previously associated with response to platinum-based chemotherapy (Oncotarget 2016;7[34]:55741-55756). The researchers identified specific polymorphisms in two genes that were associated with either greater sensitivity or resistance to the platinum-based chemotherapy.

In another example, MS was used to identify a biomarker for risk of radiation-induced fibrosis in patients with breast cancer. In a recent publication, Weigel et al. suggest that the biomarker could also serve as a therapeutic target for preventing fibrosis in patients at risk (Nature Comm 2016;doi:10.1038/ncomms10893). The authors performed differential genome-wide DNA methylation analysis using MassARRAY technology, comparing primary human dermal fibroblasts from breast cancer patients treated with radiation in whom fibrosis did or did not develop. The results pointed in particular to the fibrosis-associated hypomethylation of a kinase gene enhancer that contained two differentially methylated sites. Determination of methylation status at this site prior to treatment could help predict fibrosis risk and guide individualized dosing. A drug designed to block the affected kinase might prevent the profibrotic effects of radiotherapy.

Offering analytical capabilities that were not readily available outside of the basic research setting, MS technology slowly found its way into biopharma laboratories through skilled operators capable of using the instruments for characterizing biomolecular drug candidates. As the MS industry is designing increasingly automated, user-friendly systems with software to manage and interpret the large volumes of data produced, the spotlight focused on mass spec for analyzing complex biopharmaceuticals shines brightly. In the surging biosimilars industry, in particular, MS is an increasingly valuable analytical tool.