Complete the form below and we will email you a PDF version of "Microplastics: What Do We Know About This Emerging Contaminant?"

Complete the form below to unlock access to this Audio Article: "Microplastics: What Do We Know About This Emerging Contaminant?"

Plastics have become ubiquitous in the modern world. While an increased emphasis on personal recycling and the societal move towards a more circular plastics economy can help to reduce our production of plastic waste, there are fears that this recycling may also continue to add to the volume of microplastics being leaked into the environment.1

Microplastics, generally defined as plastic fragments less than 5 millimeters in size,2 are already found in almost every crevice of the earth. Recent scientific expeditions have found traces of synthetic fibers and microplastics near the summit of Mount Everest,3 and earlier this year, scientists reported finding microplastics in human blood for the first time.4

Although there are several studies that indicate microplastics can have a negative impact on ecological, animal and human health,5 the study of microplastics is still a relatively young field. As a result, there remain significant knowledge gaps regarding how such microplastics migrate into the environment, the potential risks that they pose, and how best to go about analyzing, studying and ultimately combating microplastic pollution.

Exploring the sources of microplastic pollution

One of the most well-known forms of microplastic are the small plastic microbeads that are routinely added to cosmetic products to act as an exfoliating agent. Now, many jurisdictions including the United States, United Kingdom and South Korea, have chosen to ban the use6 of these microbeads due to concerns over microplastic pollution. But this is not the only common source of microplastics in the environment, and neither is plastic litter.

“I think most people think the source of microplastics is litter that breaks down — it doesn’t really biodegrade to much extent; it just fragments into smaller and smaller pieces as it gets weathered by sunlight. But we also find a lot of fibers that are most likely being shed from the synthetic clothing that we're wearing,” said Dr. Matthew Ross, an assistant professor in the Department of Physical Sciences at MacEwan University. Ross’ research work largely focuses on understanding the sources and fate of pollutants in the environment.

When he began his study of microplastics, Ross initially focused on the waterways surrounding wastewater treatment plants. But after finding no difference in the concentration of microplastic fragments collected upstream or downstream from these plants,7 Ross began to look at alternative sources of microplastic pollution.

His team recently found that stormwater — the surface water that collects following heavy rain or snow — also contains significant amounts of microplastic.8 These microplastics were mostly synthetic clothing fibers as well as rubber tire-wear particles that had been washed off of the road during rainfall.

“Stormwater runoff is, in most places, not treated before it goes into waterways,” Ross explained. “Some of our newer developments are things like stormwater retention ponds that are there to help clean up some of the sediment and some of the particulates. But even still, a lot of that gets discharged into the waterways without any sort of chemical treatment or extra filtration that you would see from a wastewater treatment plant.” 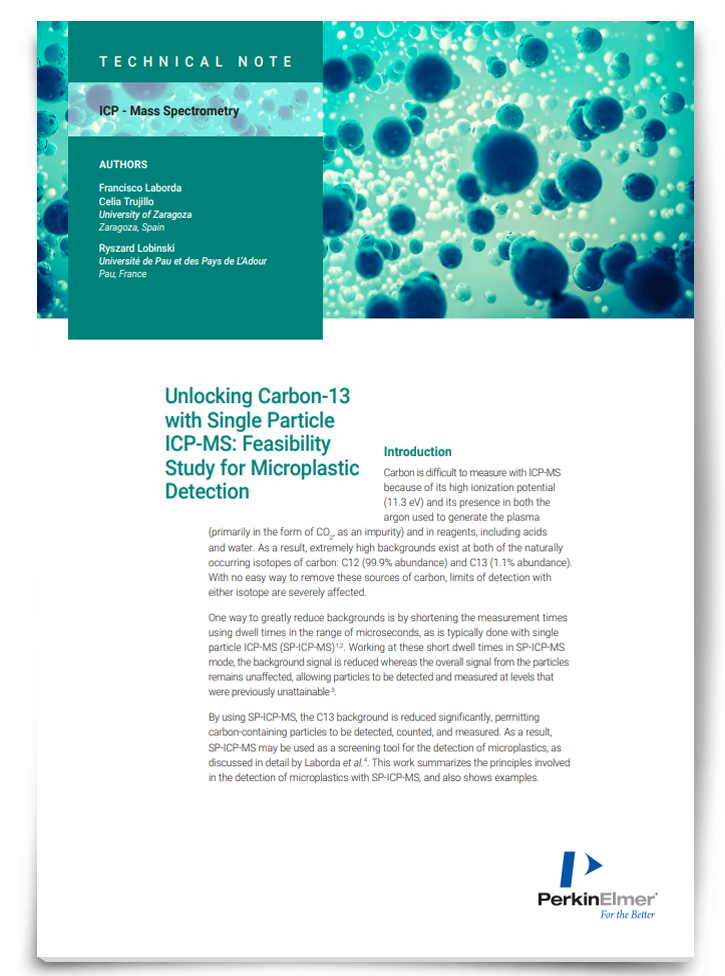 Carbon is difficult to measure with ICP-MS due to its high ionization potential and its presence in both the argon used to generate the plasma and in reagents. Download this app note to learn more about the reduction of carbon background, detection of polystyrene microparticles in consumer products and the use of SP-ICP-MS as a screening technique for microplastics.

While work continues to identify the major sources and transport mechanisms of microplastics in the environment, other researchers are focusing on the potential ecological health ramifications associated with such pollution.

When microplastics move downstream into rivers, lakes and ultimately the ocean, this can have significant impacts on marine life, as Dr. Imari Walker, a research scientist at the nonprofit research institute RTI International, explains.

“If you're replacing what should have been food in your stomach with plastic, you're not getting your full potential for nutrients,” she said. “The other issue is, depending on how small the microplastics get, they have the potential to move into the bloodstream and accumulate in tissues.”

Walker’s own research explores how plastics and microplastics decay in the environment. When a plastic is made, chemicals are added to it to give it certain structural or aesthetic properties. When these plastics begin to degrade into microplastics or nanoplastics, this can cause these chemicals to leach out into the water supply, the surrounding environment or even leach out into the gut of animals that consume them.9

Microplastics can also carry more indirect risks. For example, microplastics often get caught up in the solid sludge that is formed during wastewater filtration. In many places, this sewage sludge is repurposed and made into fertilizer. This source of microplastic contamination has been largely overlooked, and it is only recently that research has come out investigating the fate of microplastics in sludge-based fertilizer.10 As a result, many questions still remain concerning the safety of these fertilizers.

“Essentially, we're applying fertilizer that's filled with microplastics and microfibers onto our agricultural lands. Is it possible for those microplastics to then be available to the plants that we're eating? Are we accumulating nanoplastics in the roots or in the actual fruits? That's a huge question,” said Walker.

“Also, how is this affecting the nutrients, the carbon and nitrogen ratios in the soils? Is that impacting the quality of our food? We don't really have the answer to that.”

Tackling the Challenges of Environmental Analysis 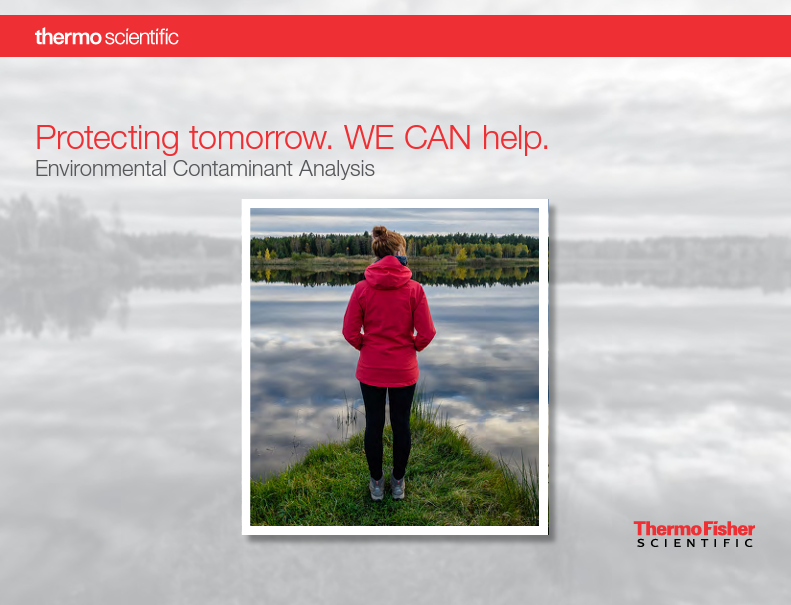 Download this eBook to learn how to develop strategies to detect even the toughest emerging concerns, accurately analyze samples faster with optimized equipment plus maximize operational productivity to improve efficiency.

While there is no central standardized method for analyzing microplastics, the current informal gold standard of testing is spectral imaging.

As an example, consider the analysis of a water sample using Fourier-transform infrared (FT-IR) spectroscopy or Raman spectroscopy. Filtration would be the first step in preparing such a sample for analysis. It is possible to separate out the microplastics from the water using a non-plastic filter and glass apparatus, however this filtration will also capture significant amounts of unwanted organic material.

“All of that material would need to be digested, because if you're taking things out of the real world, it's not just microplastics,” said Dr. Fay Couceiro, principal research fellow in biogeochemistry and environmental pollution at the University of Portsmouth.

Couceiro recently led an investigation that reported the successful use of Fenton reagent in rapidly removing organic matter from wastewater samples intended for microplastic analysis.12 Couceiro believes that this optimization should help to improve the speed and cost-efficiency of sample preparation for laboratory microplastics analysis.

“Fenton reagent is hydrogen peroxide with ferric sulfate acting as a catalyst. Instead of [the digestion sample] spending 7 to 14 days in hydrogen peroxide alone, you can do this in a couple of hours,” Couceiro said.

“If you use acid or if you use some of the other methods out there, what you'll find is that you're actually damaging the plastic slightly in the process, which can change the spectra and make it harder to identify,” she explained. “With Fenton reagent, the surface of the plastic wasn't changed significantly, and the spectrum wasn't changed significantly either. That's why we feel it is the best of both worlds.”

Following digestion, a density separation step can help to separate out the microplastics from any remaining minerals and biological materials. After a final solvent wash, the microplastics should be isolated and ready for analysis. Using spectral analysis techniques such as Raman spectroscopy, researchers can compare the spectrum produced by a microplastic to a wider spectral library in order to identify and characterize the isolated microplastics quickly.

The need for standardization in microplastics analysis

Working towards a standardized method for microplastics analysis is a core priority for today’s microplastics researchers. Without standardization, it can be difficult for academics to compare and contrast research findings obtained by different groups in different geographical regions.

It is also important from an industrial and legal perspective. As microplastic pollution has become a more widely recognized threat, microplastics analysis has also begun to shift away from exclusively being the domain of academics or government research institutions.13 Testing services offered by general environmental testing laboratories will need to be standardized if this pollution is to be regulated.

“The only way to legislate is to have a standardized method that everybody is following for analysis and quantification. You can't legislate until you have a standard method, and that's incredibly important,” Couceiro said.

“Whilst I think that there should be a gold standard method for academia and research, I also think there needs to be a quick and dirty way that gives you a general ballpark [result],” Couceiro added. “Particularly for industry, if you're going to say that a process requires tweaking and something's gone wrong, a two-week lag before you get some data back is not fast enough.”

Visual inspection using a microscope or stereoscope is one common method for analysis that does not require the kinds of expensive Raman spectroscopy apparatus used in cutting-edge academic research, however visual methods are very time-consuming. A faster approach is the use of staining dyes such as Nile Red,14 although this method has been criticized for generating false positives through the unintentional staining of other organic matter.15

When it comes to tackling microplastic pollution, detection is almost a foregone conclusion. Microplastics are everywhere. And so, in light of the huge footprint that microplastics already have over our world, analysis then takes on a new importance as a means to investigate how microplastics spread and how to stem their flow.

This is a sentiment echoed by Ross, who believes that the sheer volume of pre-existing microplastics means that focus should be on “turning off the tap” and preventing the flow of these plastics into the natural environment. Further study should also help to identify those plastics that could be emitting dangerous chemical additives, as in the case of bisphenol A (BPA)-containing plastics, Walker says, with a view to understanding and limiting the dangers that they pose.

Alexander Beadle
More from this author >
Advertisement
Chosen for You
Podcast