In order to design and develop new pharmaceutical compounds, the distribution of drugs and their metabolites in tissues must be determined to gain in-depth knowledge of the uptake of a drug into its target tissue. Earlier drug distribution studies were conducted using technology such as autoradiography, where the compound of interest must be labeled with radioactive chemicals, and only one compound can be analyzed at a time. The emergence of advanced mass spectrometry (MS) techniques, such as matrix-assisted laser desorption/ionization (MALDI) imaging, enabled the non-radioactive, label-free, and non-destructive localization of biomolecules – from metabolites to proteins – without prior knowledge of their presence [1].

A single MALDI imaging measurement produces up to several thousand distribution maps, or ion images, to reveal greater insight and understanding of molecular makeup and regional heterogeneity. This is useful in untargeted discovery studies, such as those in clinical research, seeking to uncover novel biomarker signatures of disease and treatment. It also benefits pre-clinical drug discovery, by providing direct distribution monitoring of therapeutic compounds, their metabolites and of target engagement. The Center for Mass Spectrometry and Optical Spectroscopy (CeMOS) at Mannheim Technical University, Germany, is an integrated research center working at the cutting-edge of MALDI imaging technology. CeMOS uses a broad range of MS instruments to aid investigations into emerging applications in pharmaceutical research and development (R&D), particularly to study the distribution of drugs, their metabolites and formulations, as well as drug response.

MALDI imaging in pharma has a key application in identifying the distribution of drugs and their metabolites in tissues. The molecular composition of every drug changes in the liver, which leads to a change in mass that can be observed in the same dataset. The distribution of the parent drug can then be compared to its metabolites.

The CeMOS laboratory led by Dr Carsten Hopf, Professor of Drug Discovery, uses this approach to determine the co-localization of drugs and drug metabolites with tumors, based on tumor-selective lipids that indicate the tumor location. Recently, MALDI imaging was used to confirm the rapid in situ distribution of Fasudil – a drug approved for cerebrovascular bleeding – and its metabolite Hydroxyfasudil, in the liver and stomach tissue of wild type (WT) and gastric tumor tissue of transgenic mice [2]. Fasudil is an inhibitor of RHO-associated protein kinases (ROCK1/2), drug targets down-stream of the RHOA GTPase. Gain-of-function mutations of the latter had been implicated in diffuse-type gastric carcinoma [3], but the effectors were unknown. Data from this study suggests that ROCK1/2 may be suitable targets for a novel strategy for treatment of gastric cancer (GC), but the limited distribution of Fasudil into tumor tissue indicates the need for ROCK inhibitors optimized for tumor penetration. The identity of potentially translatable candidate lipid biomarkers for GC was established using MALDI magnetic resonance MS (MRMS) and MALDI time-of-flight (TOF)/TOF MS.

Subsequent statistical analysis can be used to evaluate a drug’s tumor-targeting potential, which would be completely impossible without the high resolving power of MALDI imaging. This is particularly important for inhaled drugs, for example, which should be designed so they do not enter the systemic circulation, where they often have the potential to cause harm. MALDI imaging helps answer the question of whether the drug really stays in the lung.

In addition to the active pharmaceutical ingredient (API), drugs also contain carrier particles, such as lipid nanoparticles, that can alter the drug’s half-life or distribution in the body. The researchers at CeMOS are therefore also interested in imaging drug formulations and have used MALDI imaging to visualize the locations of intact liposomal drug carriers for the simultaneous imaging of drugs and formulations in tissues [4]. Indocyanine green (ICG) was used as cargo, and two liposomal markers, 1,2-dipalmitoyl-sn-glycero-3-phosphoglycerol (DPPG) and 1,2-distearoyl-sn-glycero-3-phosphoethanolamine, conjugated with monodisperse polyethylene glycol (PEG36-DSPE), were incorporated into liposomal carriers and administered to mice (Figure 1). Newly developed MALDI imaging instrumentation has high imaging speeds, which confers improvements in lipid analysis of whole organ sections and allowed the group to visualize liposome integrity and distribution in mouse organs. 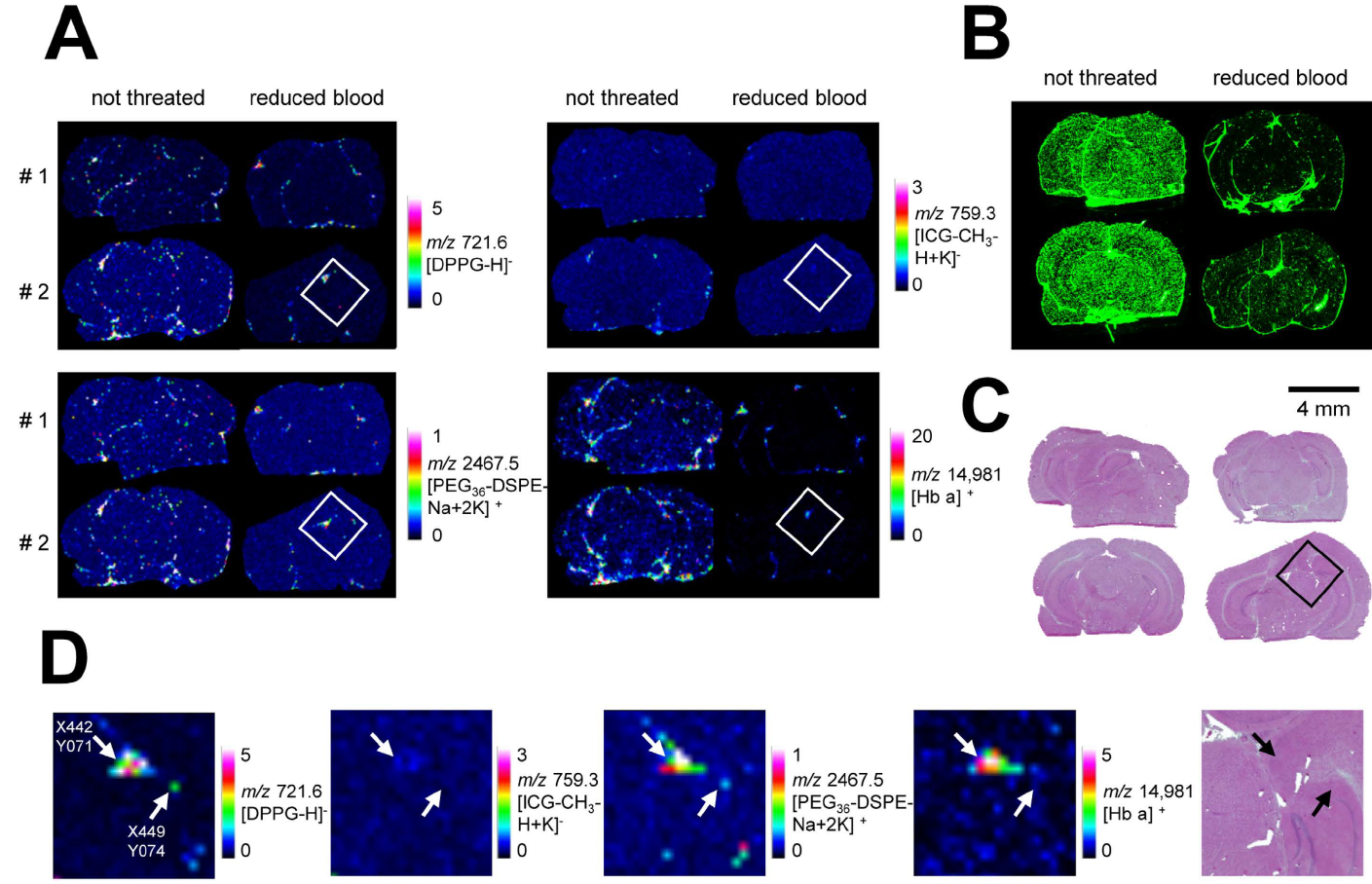 The laboratory has pioneered some additional MALDI imaging approaches. For example, the team was the first to image drug responses to elucidate the target engagement effects of drugs on tissues based on defined pharmacodynamic markers. In some cases, the marker of drug response might be known and can be imaged. If there is a defined protein and the drug action changes the mass of that protein, then the protein with the changed mass can be imaged. This is an indication not only of where the drug is, but where it really works. Histone deacetylase inhibitors (HDACi) lead to mass changes characteristic of histone acetylation, which allow for quantitative label-free in situ monitoring of drug target engagement by MALDI-TOF MS in cancer cells [5].

The growing interest in MALDI imaging for pharmaceutical research is likely to facilitate the ongoing advancement of instruments, with higher sensitivity and higher spatial resolution. Future work in this field would also greatly benefit from new methods of obtaining high specificity, to guarantee the visualization of drug distribution, at higher speeds. More applications in pharmaceutical research will also develop in line with technological advancements. Drug action, histopathology, and distribution of drug formulation ingredients are likely to attract MALDI imaging, for example.

Aside from MALDI imaging for pharma, the laboratory has begun investigating the use of quadrupole time-of-flight (QTOF) and MALDI-TOF MS for biopharmaceutical analysis. The group is interested in obtaining as much sequence information as possible, and obtaining precise mass information, on entire antibodies or antibody drug conjugates (ADCs), or fragments of antibodies (~25 kDa). Biopharmaceutical development is a key area of interest for the laboratory’s future work, including monoclonal antibody (mAb) characterization.