Chromatography is the backbone of analytical laboratories all over the globe with high performance liquid chromatography (HPLC) representing the largest portion. In HPLC, samples are dissolved in a liquid mobile phase; they are then separated into constituent compounds by interactions with the stationary phase components that coat the inside of the HPLC column. Although having matured as a technique for more than 50 years, classical HPLC has been challenged - or complemented - in the last decade by the availability of ultrahigh performance liquid chromatography (UHPLC), capable of using smaller size particles that create elevated pressures exceeding 400 bars.

HPLC – the workhorse of separation in an analytical world

HPLC is generally seen as the most versatile chromatographic methodology, with applications in chemistry, bio-analytical sciences and the pharmaceutical industry. The versatility of HPLC stems from its unique, universal applicability to a very diverse range of analytes; from small molecules and ions to polymers and large biomolecules. The technique is constantly evolving, driven, in the main part, by a wide variety of available stationary phases and the implementation of more sophisticated technologies such as more sensitive detectors, allowing for robust and reproducible separation conditions. Adding to the inherent advantages in analytical analyses, HPLC is nondestructive and therefore well-suited for preparative applications. Considering all these applications, HPLC can be considered as a “multi-tool” of chromatographic techniques.

Will UHPLC as the designated heir be able to take over in every field?

UHPLC systems are characterized by three common features: higher pressure limits, lower system dispersion, and a small overall dwell volume. The first attribute was pivotal for supporting the development of sub-2 µm particles in stationary phases. Small particle diameters as used in UHPLC lead to an increase in efficiency, optimal velocity and mass transfer in liquid chromatography. With consequently more efficient separations, the increased system pressure limit demanded by the higher backpressure of the smaller diameter particles was the driver for development of UHPLC1. Although pressure capabilities may be perceived as most important for the technology, the latter two features were necessary adjustments to counteract peak broadening and to maintain the high separation efficiencies. This was achieved by holistic design and re-engineering of modern UHPLC for sample inlets, flowpaths, connections and detectors.

What is the promise of UHPLC and why should we transition to UHPLC in the future? It is all about speed and gain in chromatographic resolution. First, we can consider analysis speed and the increase in chromatographic peak capacity as two sides of the same coin. A typical gain in speed could be achieved, for example, by switching from a 150 mm HPLC column packed with 5 µm particles, usually with an 8 min run time, for a 50 mm UHPLC column with 1.8 µm particles and 3 min run time. Reductions in run times of over 90% are achievable (figure 1). It is a clear advantage for labs to be able to double the samples analyzed per time unit to achieve overall higher laboratory efficiencies based on maximized analytical and instrument efficiency.

Figure 1. Analysis of DNPH-derivatized aldehydes and ketones A using a C18, 4.6 × 150 mm, 5 μm column (HPLC) B using a C18, 2.1 × 50 mm, 1.8 μm column (UHPLC). Overlay of six consecutive runs for A and B. By transferring the method from HPLC to UHPLC, the analysis time and solvent consumption can be reduced by approximately 90 %.
Second, the user who needs increased resolution chooses UHPLC. For analytes that only show small differences in selectivity, using a UHPLC column helps to separate the peaks to baseline resolution (figure 2). If dealing with most complex samples, the solution would be to use longer columns or serial combinations of columns. While in both setups, the increased backpressure calls for the UHPLC instrumentation to be able to meet the pressure ratings needed, the latter would also benefit from the improved connections of capillaries and columns that only marginally contribute to extra-column band spreading. Ultimate resolution can be achieved using 2D-LC (Two-Dimensional Liquid Chromatography) which can be applied via HPLC or, even better, as UHPLC methods. 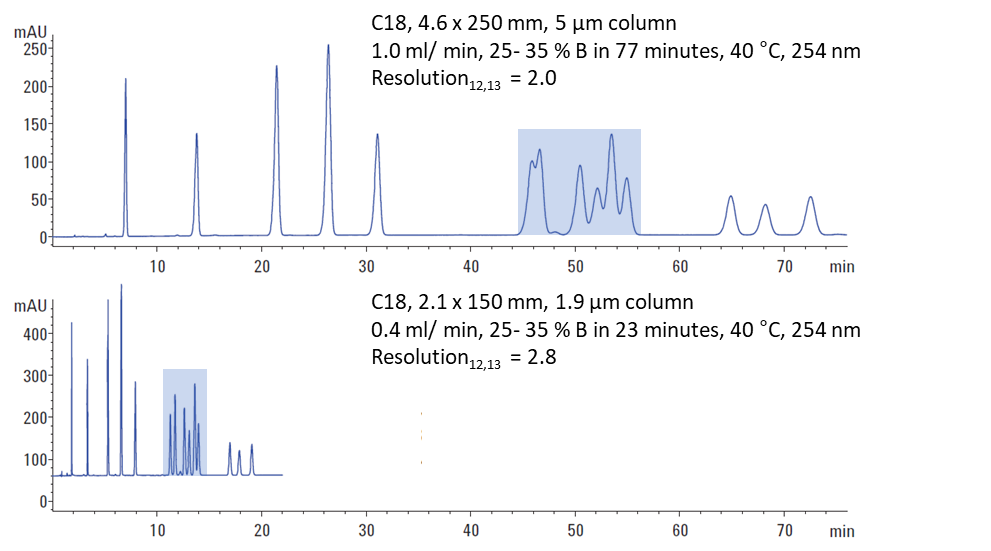 Figure 2. A C18, 4.6 × 250 mm, 5 μm analysis of compounds found in the EPA 8330 standard solution (14 explosive compounds) is improved by transferring to a C18, 2.1 × 150 mm, 1.9 μm column; resolution and peak capacity are improved, while saving significant time, sample, solvent, and money.
Although time savings are already a benefit in a productive analytical lab, this also has major advantages in centralized method development facilities. Today, in line with the engineering of UHPLC systems, technical solutions are offered that are designed to reduce the sample to sample time, e.g. by faster autosampler units. Further, automated workflows exist that allow for running parallel column setups enabled through sophisticated valves or having automated solvent mixing/ replacement, both being integrated in the chromatography data system (CDS). This facilitates efficient method development and fast column equilibration.
With the increasing need to reduce the ecological footprint in the lab, UHPLC technology has the potential to help lab managers meet this challenge; the lower flow rates, smaller column diameters, reduced equilibration times and lowered overall system volumes all combine to directly reduce the amount of organic solvents used during analysis. Ultimately this leads to a single advantage: the reduction in overall operating costs!

Considering the benefits discussed, lab managers may still be reluctant to change from the HPLC world to UHPLC for reasons that lie beyond analytical efficiencies and compelling results.
The first reason would be the investment that is necessary to upgrade to UHPLC. Vendors have addressed this by broadening portfolios to offer tailored UHPLC solutions that allow for cost effective and application-specific investments.
Secondly, laboratories switching to UHPLC would also need to re-write their Standard Operating Procedures, quality tests and validation methods, previously developed on HPLC instrumentation. It is anticipated that legacy methods that have been developed on HPLC instrumentation are not easily transferred to UHPLC instruments. Crucial for the latter is the compatibility of instrumentation with different application areas. In an ideal scenario, methods being developed should be usable on the best performing midrange UHPLC systems, with optimized cost efficiencies for high-throughput instruments. Because of the importance of this, vendors have come up with system emulation technologies that are able to emulate system hardware.
Changing from HPLC to UHPLC is thus facilitated by allowing for complete backwards compatibility in the vendor’s own HPLC and UHPLC portfolio as well as for selected third party instrumentation.

Taken together: will UHPLC continue to progress?

When we ask the question will UHPLC be the new HPLC the answer can only be in the affirmative.  UHPLC will be able to tackle the bread and butter business as well as being the enabler for sophisticated analyses UHPLC will continue to help the modern chromatographer to excel by combining the highest levels of lab and cost efficiency with the best performance, speed and reliability.
Reference
1. Fekete, S., Veuthey, J.L., Guillarme, D., 2015. Comparison of the most recent chromatographic approaches applied for fast and high resolution separations: Theory and practice. J. Chromatogr. A 1408, 1–14.

Complete the form below to unlock access to this Audio Article: "UHPLC- Robust Technology Built to Perform"