Complete the form below and we will email you a PDF version of "One-Chip-Fits-All: Biofabrication of Hydrogel Fiber Architectures Using Flow Focusing Microfluidics"

Cell-laden hydrogel microfiber structures developed by microfluidic technologies represent an exciting approach to recapitulating the architecture and functionality of biological tissues at the microscale. Moreover, they are valuable in the modeling of distinct 3D environments, such as the multicellular compartments in cancer models. However, creating a wide range of multi-compartment microfibers with complex shapes and compositions has so far only been possible by using individually engineered microfluidic set-ups that constantly need to be tuned. This article discusses an innovative biofabrication method that uses a single 3D hydrodynamic flow focusing chip to reproducibly and precisely generate different hydrogel configurations with specific geometries for various biological applications.

A chip off the old block

Hydrogel microfiber structures have far-reaching potential in the biomedical field as they can be used to model the dimensions, mechanics and complexity of different biological tissues, disease pathologies and detailed drug responses. For example, it is possible to fabricate melanoma-on-a-fiber models using a triple ribbon shape, to simulate the invasion behavior of cancer cells in the basement membrane and stroma microenvironments.

However, previous approaches to creating different hydrogel geometries using 2D hydrodynamic chips present some challenges, for instance, many morphologies require their own particular microfluidic set-up. As well as this, the traditional 2D chips have a simple geometry, so the range of microfiber shapes that can be produced is extremely limited. In response to these issues, an alternative biofabrication technique using a single 3D hydrodynamic flow focusing chip has been developed, which enables spinning of hydrogel precursors into a wide variety of multi-material, multi-compartmental microfibers with complex architectures.1

A new dimension for microfluidics

The fluid stream is then spun into a crosslinking calcium chloride bath for hydrogel fiber formation on extrusion as it emerges from the outlet channel. By pulling the stream at a higher speed than that at which it is spinning, it is possible to achieve a considerable size reduction, creating approximately 2‑3 m of multi-compartmental hydrogel fibers measuring less than 50 μm in diameter, one of the smallest hydrogel fiber sizes yet cited in the literature (Figure 2).

Figure 2: Fiber size can be reduced from 100 μm to less than 50 μm by pulling the hydrogel precursor at a higher speed than that it is spinning at, while still maintaining its shape.

3D flow focusing has so far proven to be a fast and efficient way of manufacturing large volumes of 3D structures, which can then be processed into numerous smaller lengths and used in an array of different models. A range of hydrogel fiber shapes can be created by employing alternative channel configurations (Figure 3).

It was found that modulating the viscosity of the solutions and applying varying levels of pressure also distributed the material inside the fiber in vastly different ways (Figure 4). This reproducibly generated a plethora of distinct compartment architectures and microfiber sizes, from hydrogels and hydrophobic core-shell shapes to ribbon-like structures, including many geometries that were previously unobserved. However, viscosity and pressure did not seem to have any significant effect on the range of architectures that could be manufactured using typical 2D flow focusing chips. 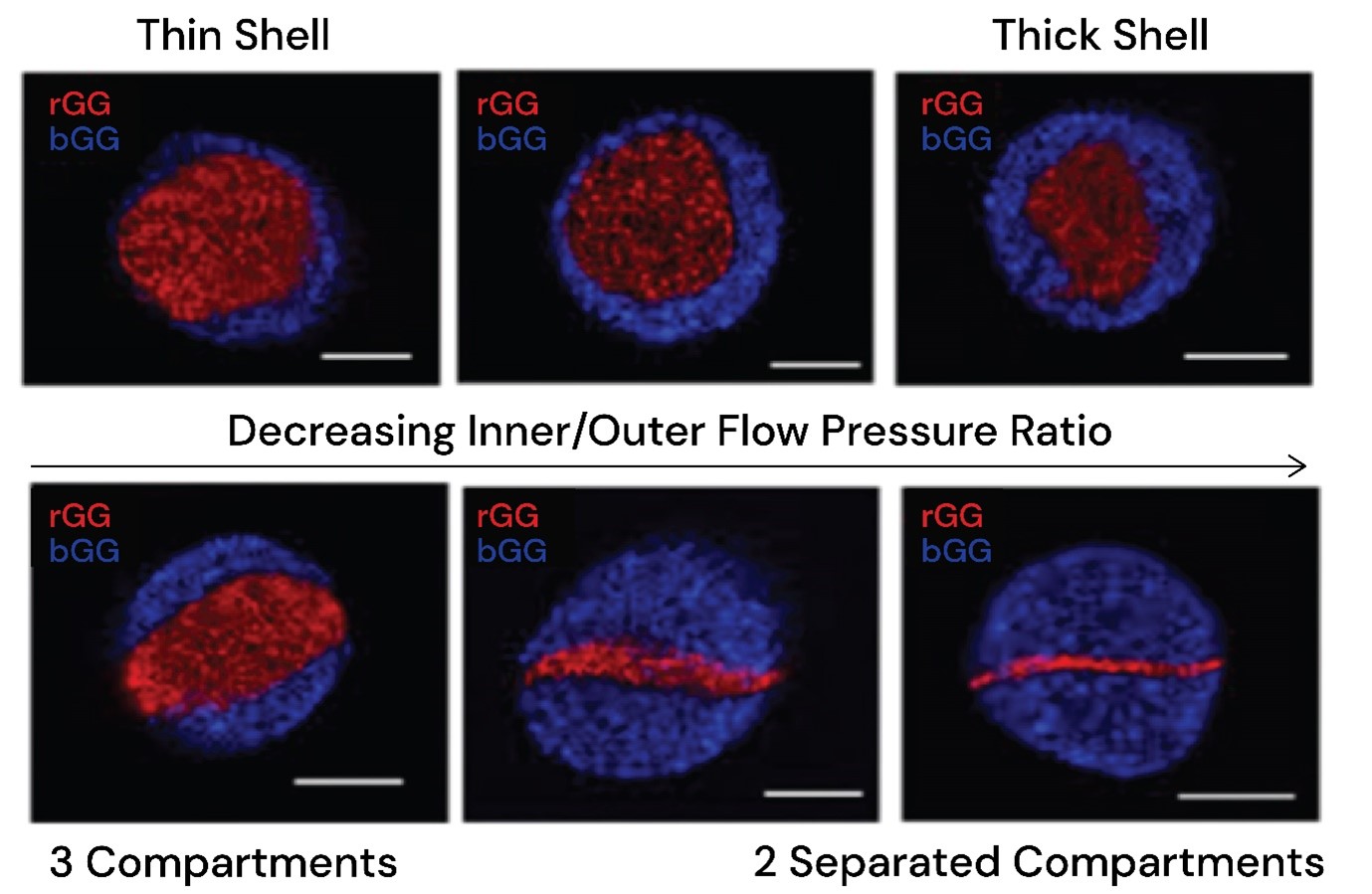 Figure 4: The effects of pressure ratios on the relative size of fiber compartments in the core-shell (top) and ribbon (bottom) morphologies. The inner channel to outer channel pressure ratio is reduced from left to right, causing a decrease in either core diameter or inner ribbon thickness. bGG - Gellan Gum with blue microparticles, rGG –Gellan Gum with red microparticles.

Opening the doors to novel applications

Researchers are now delving even deeper into the impacts of material, viscosity and pressure on microfiber shapes, and eventually aim to be able to predict the morphologies that would be yielded under different circumstances. The potential of flow focusing microfluidics for cancer modeling is additionally being brought into sharp focus due to the ever-growing demand for highly realistic tissue models. Understandably, pharmaceutical companies are very much interested in trialing new molecules and drugs on a living material that is quick and easy to fabricate, to speed up testing processes and reduce the overall cost of developing a novel treatment. The practicality of using 3D flow focusing microfluidic biofabrication to additively construct larger tissue engineering models than are currently available is also being explored.

This original biofabrication approach is highly relevant for biological applications, as it is the first to assemble 3D structures that approach the sizes of single cells and other small biological structures, such as blood arterioles. 3D flow focusing is therefore a powerful and versatile platform that can be used to model a wide variety of tissues and scenarios in vitro, producing more life-like and realistic results, and helping scientists to move one step closer to finding cures for multiple conditions.

Alexandra P. Marques is principal investigator at 3B’s Research Group. She holds a Habilitation in tissue engineering, regenerative medicine and stem cells, with a specialization in stem cells, a PhD in Materials Science and Technology – Biomaterials, and a BSc in Biochemistry. She is a Founder and Principal Investigator of the 3B’s Research Group, University of Minho, Portugal, and her research interests focus on integrating the knowledge of stem cells and biomaterials into tissue engineering to define innovative strategies to improve skin wound healing.

Rui L. Reis is a full professor of Tissue Engineering, Regenerative Medicine, Biomaterials and Stem Cells at the University of Minho, Portugal. He is also the Director of the 3B’s Research Group – Research Institute on Biomaterials, Biodegradables and Biomimetics – Portugal.

Richard Gray is the business development director of Blacktrace Inc., the US office for the UK-based Blacktrace Group, which includes the Dolomite Bio, Dolomite Microfluidics and Particle Works brands. He is one of the two co-founders of Blacktrace, which was established 20 years ago to commercialize microfluidic technology for a wide range of scientific applications.