Analyzing complex sample matrices is a challenging business, interferences may lead to wrong results, so you have to be confident that you are measuring your analytes correctly. Described as the first, future-proof triple quadrupole ICP-MS solution, the Thermo Scientific™ iCAP™ TQ ICP-MS is designed to help researchers overcome these issues by combining triple quadrupole accuracy with single quadrupole ease of use.

AB: How much of a problem are interferences in challenging matrices and how do scientists overcome this at the moment?

Daniel Kutscher (DK): As with all analytical techniques, ICP-MS is affected by interferences which may lead to wrong results. Of most concern are spectral interferences, basically other ions that have the same nominal mass as the analyte and cannot be resolved using quadrupole based ICP-MS instruments. Roughly, one can distinguish two types of spectral interferences: Polyatomic and isobaric interferences.  Polyatomic interferences are formed through recombination of atomic ions during the transition of the ion beam into the mass spectrometer, and virtually all atoms present in a sample may contribute. In contrast, isobaric interferences are caused by elements that share isotopes with the same nominal mass (e.g. 64Zn and 64Ni), or through the formation of doubly charged ions, which may appear at the same m/z ratio as the analyte (for example, in presence of Sm, 75As+ is interfered through the formation of 150Sm2+). The removal of polyatomic interferences is effectively accomplished using an inert gas (Helium) and a generic interference removal mechanism, commonly referred to as kinetic energy discrimination (KED). The removal of isobaric interferences is possible by leveraging the different reactivity of given elements towards reactive gases such as O2, H2 or NH3. If either the analyte or the interfering ion undergoes a reaction with one of the aforementioned gases, it is possible to measure interference free. However, when using reactive gases in a collision/reaction cell system, there is always the potential risk of other unwanted reactions occurring at the same time, which may lead to other unwanted interferences. In order to better control the reaction pathways in the cell, it is important to include an additional mass filtering quadrupole ahead of the collision/reaction cell system, so that only the analyte of interest (and hence the interference to be removed) may enter the device. This is exactly what is happening inside triple quadrupole ICP-MS systems like the Thermo Scientific iCAP TQ ICP-MS. 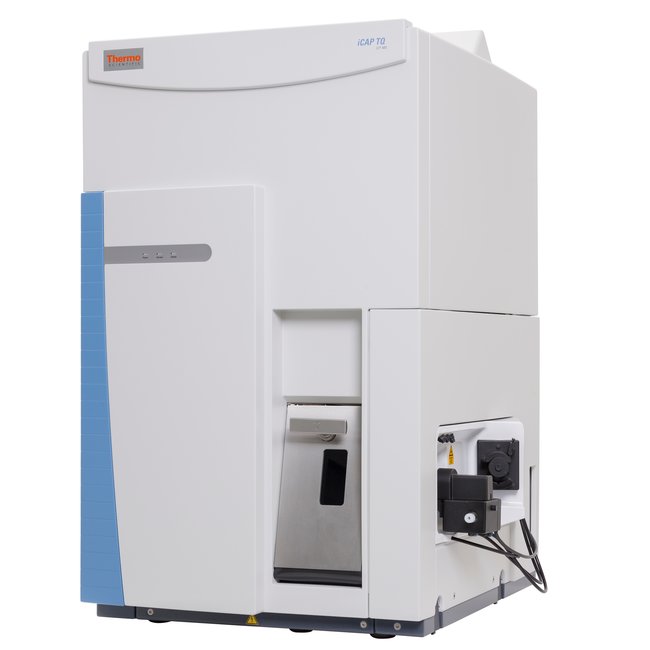 AB: The Thermo Scientific iCAP TQ ICP-MS system is designed to overcome interferences, how does it do this?

DK: The iCAP TQ ICP-MS allows the use of both established methods such as kinetic energy discrimination as well as analysis using triple quadrupole technology in one and the same run. It uses an additional quadrupole mass filter inserted before the QCellTM collision/reaction cell system to control ions entering the cell in measurement modes utilizing triple quadrupole technology. Inside the collision/reaction cell system, either the analyte or the interference may undergo chemical reactions with the gas used. Subsequently, the reacting ion normally undergoes a change in mass, and hence can be separated in the analyzing quadrupole. The process of setting up a method for triple quadrupole-based modes, which would normally include the selection of the most appropriate reaction gas and Q1 and Q3 scan settings, is greatly simplified through the Reaction Finder Tool included in the Qtegra Intelligent Scientific Data Solution software, which makes method set up really quick and easy, especially for users who are not experts in the field of ICP-MS. When operating in single quadrupole modes, the first quadrupole is acting as an ion guide only and does not influence the performance of the system. That allows to easily transfer established methods from existing instruments.

AB: The system also allows users to switch between single and triple quadrupole modes in a single multi-element experiment. Is this in answer to single quad users requiring increased sensitivity and decreased detection limits or was the focus more on future proofing the system?

DK: Whereas for some elements, triple quadrupole ICP-MS is the solution, there are other cases where kinetic energy discrimination allows to achieve lower limits of detection. The combination of established single quadrupole modes and triple quad modes makes therefore a lot of sense for a given application. Of course future proofing is an important point when the decision whether to go for a technical improvement, such as triple quadrupole ICP-MS, is pending. Many of our customers require to accurately analyze elements in challenging matrices with improved detection limits. At the same time, the productivity needs to be considered, and often labor costs or skill levels of the lab personnel may restrict the access to technology advances. In order to facilitate method development for users tasked with routine analysis of a high number of samples, we have implemented a dedicated software tool, Reaction Finder for the Qtegra Intelligent Scientific Data Solution software, which allows the flexible combination of single- and triple quadrupole measurement modes in a single run. This tool removes the inherent complexity of triple quadrupole ICP-MS (meaning to find the right combination of reactive gas, product ion mass and scan settings), and automatically proposes the right strategy for analysis, including, where appropriate, single quadrupole modes. Through Reaction Finder, the technology is greatly simplified and becomes accessible to a wider range of laboratories who want to add this to their existing capabilities.

DK: The iCAP TQ ICP-MS allows scientists to analyze all elements that are commonly referred to as challenging using conventional single quadrupole ICP-MS, for example Sulphur or Pphosphorous, but also Arsenic or Selenium in sample matrices that contain high levels of rare earth elements. This applies for example to research orientated environmental labs, but also biomedical and clinical research laboratories.  The analysis of Ti in biological matrices such as blood or urine is another application area where only triple quadrupole ICP-MS is capable of removing all interferences. However, also in more industrial environments, the use of triple quadrupole ICP-MS has true advantages, for example, if pure metals and alloys need to be characterized for contaminations at trace levels. For such analysis, the sample matrix may contain up to hundreds of ppm of the main components of an alloy, leading to severe interferences on potential analytes. In these cases, triple quadrupole ICP-MS is far better suited to remove all interferences in comparison to single quadrupole instruments.

Dr Daniel Kutscher was speaking to Ash Board, Director of Editorial for Technology Networks.