A Highly Sensitive Graphene Based Sensor

A Highly Sensitive Graphene Based Sensor

This is one of the first devices exploiting the unique electronic and optical properties of graphene for a practical application.

Many areas of fundamental research are interested in graphene owing to its exceptional characteristics. It is made of one layer of carbon atoms, which makes it light and sturdy, and it is an excellent thermal and electrical conductor. Despite its apparently limitless potential, however, few applications have been demonstrated to date. Scientists at EPFL’s Bionanophotonic Systems Laboratory (BIOS) together with researchers from the Institute of Photonic Sciences (ICFO, Spain) have now added another one. They have harnessed graphene’s unique optical and electronic properties to develop a reconfigurable highly sensitive molecule sensor. 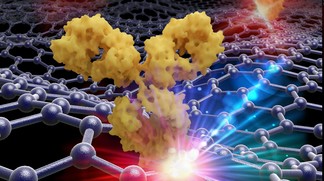 The researchers used graphene to improve on a well-¬‐known molecule-¬‐detection method: infrared absorption spectroscopy. In the standard method, light is used to excite the molecules, which vibrate differently depending on their nature. It can be compared to a guitar string, which makes different sounds depending on its length. By virtue of this vibration, the molecules reveal their presence and even their identity. This “signature” can be “read” in the reflected light.

This method is not effective, however, in detecting nanometrically-¬‐sized molecules. The wavelength of the infrared photon directed at a molecule is around 6 microns (6,000 nanometres – 0.006 millimeters), while the target measures only a few nanometres (about 0.000001 mm). It is very challenging to detect the vibration of such a small molecule in reflected light.

There is where graphene comes in. If given the correct geometry, the graphene is able to focus the light on a precise spot on its surface and “hear” the vibration of a nanometric molecule that is attached to it. “We first pattern nanostructures on the graphene surface by bombarding it with electron beams and etching it with oxygen ions,” said Daniel Rodrigo, co‐author of the publication. “When the light arrives, the electrons in graphene nanostructures begin to oscillate. This phenomenon, known as ‘localized surface plasmon resonance,’ serves to concentrate light into tiny spots, which are comparable with the dimensions of the target molecules. It is then possible to detect nanometric structures.”

Reconfiguring graphene in real time to see the molecule’s structure

There is more to it. In addition to identifying the presence of nanometric molecules, this process can also reveal the nature of the bonds connecting the atoms that the molecule is composed of.

When a molecule vibrates, it does not give off only one type of "sound." It produces a whole range of vibrations, which are generated by the bonds connecting the different atoms. Returning to the example of the guitar: each string vibrates differently and together they form one musical instrument. These nuances provide information on the nature of each bond and on the health of the entire molecule. “These vibrations act as a fingerprint that allow us to identify the molecule; such as proteins, and can even tell their health status” said Odeta Limaj, another co-¬author of the publication.

In order to pick up the sound given off by each of the strings, it has to be possible to identify a whole range of frequencies. And that is something graphene can do. The researchers “tuned” the graphene to different frequencies by applying voltage, which is not possible with current sensors. Making graphene's electrons oscillate in different ways makes it possible to “read” all the vibrations of the molecule on its surface. “We tested this method on proteins that we attached to the graphene. It gave us a full picture of the molecule,” said Hatice Altug.

A big step closer to using graphene for molecule sensing

The new graphene-¬‐based process represents a major step forward for the researchers, for several reasons. First, this simple method shows that it is possible to conduct a complex analysis using only one device, while it normally requires many different ones. And all this without stressing or modifying the biological sample. Second, it shows graphene’s incredible potential in the area of detection. “There are many possible applications,” said Altug. “We focussed on biomolecules, but the method should also work for polymers, and many other substances,” she added.