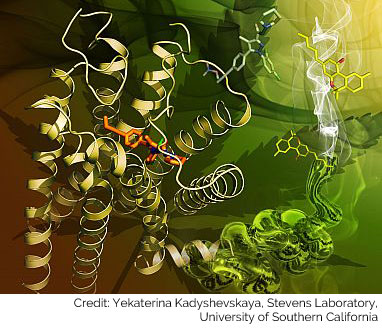 The Cannabis sativa plant, also known as marijuana, contains compounds called cannabinoids, which can act on the brain to affect mood or consciousness. Tetrahydrocannabinol, or THC, is perhaps the best known of these compounds. Some evidence suggests that cannabinoids might help to treat certain health conditions. Possible uses include pain, inflammation, epilepsy, nerve cell diseases, and substance use disorders. However, some cannabinoids can cause side effects, such as dizziness, hallucinations, and paranoia. Some synthetic cannabinoids, such as K2 or Spice, can produce severe and even deadly reactions.

Cannabinoids exert their primary effects in the brain by binding the human cannabinoid (CB1) receptor. Determining the detailed 3-D structure of this receptor at a fine level is important for potential drug development, as it reveals key details about how the receptor and drugs might interact. An international group of researchers set out to determine the structure of the CB1 receptor. Their work was funded in part by NIH’s National Institute on Drug Abuse (NIDA).

The researchers synthesized a chemical called AM6538 that they designed to inactivate and help crystallize the CB1 receptor. They slightly modified CB1 as well to optimize it for crystallization. They then computed the 3-D structure of the CB1-AM6538 complex using X-ray crystallography, in which the angles and intensities of X-rays that bounce off a crystal structure are used to determine molecular shape.

The crystal structure revealed that the CB1 receptor has a complicated binding pocket with multiple subpockets. Based on prior findings, the scientists were able to predict how other cannabinoids would fit into the receptor. The model revealed insights into how long each cannabinoid might bind to the CB1 receptor and how each might cause slightly different structural changes to the receptor. These findings provide clues to the mechanisms by which different cannabinoids can exert somewhat differing effects.