Published: July 19, 2021
| Original story from the University of Illinois
News

A new study shows that it is possible to use mechanical force to deliberately alter chemical reactions and increase chemical selectivity – a grand challenge of the field.

“We think of chemical reactions as molecules moving on a surface of potential energy in the way hikers follow the contour map of mountains and valleys along a trail,” said lead author Yun Liu, a post-doctoral researcher in Moore’s research group. “A mountain along a reaction path is a barrier that needs to be traversed before the molecules can descend into their final product. Therefore, the relative height of barriers control which path the molecules will most likely choose, allowing chemists to make predictions about what a particular chemical reaction will produce – an outcome called selectivity.” 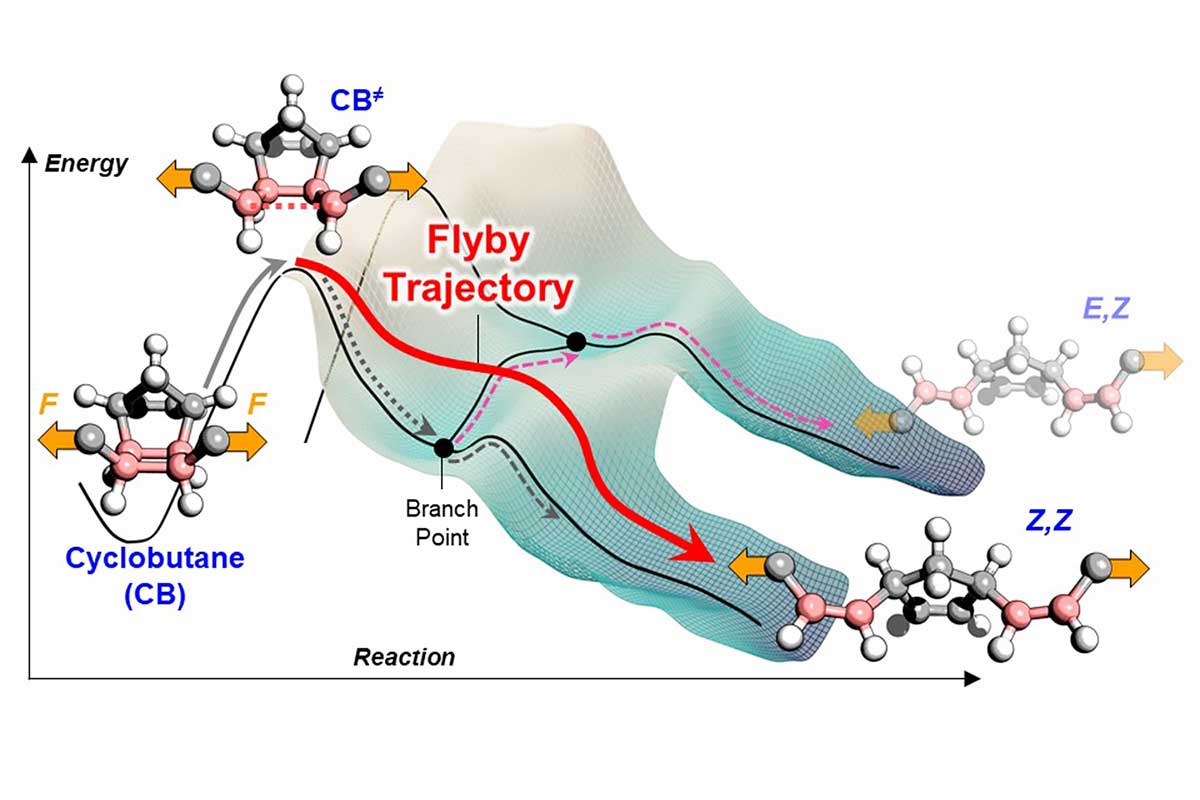 An illustration showing the movement of a molecule across a potential energy surface in the way hikers follow the contour map of mountains and valleys along a trail. When a mechanical force is applied, energy increases and the molecule becomes excited, jumps the initial energy barrier and has enough energy to continue its “flyby trajectory” over the subsequent energy barrier.  Graphic courtesy Yun Liu

Chemists have traditionally assumed that the jiggling of molecules – known as “molecular dynamics” – is governed by a potential energy surface. Molecules transform by chemical reactions that seek the path requiring a minimum amount of energy. However, emerging evidence shows that molecules often do not have time to sample the surface, leading to deviations called nonstatistical dynamic effects, the researchers said.

Nonstatistical dynamic effects are observed in some common reactions such as nitration of benzene and dehydration reactions,” Liu said. “Despite these examples, NDEs have not fully captured chemists’ attention because they are difficult to measure and cannot be controlled to change the reaction outcomes – the essential pursuit of chemistry.”

Liu developed an experimental design using a carbon-13 isotope-labeled ring molecule with two polymer chains attached. Liu placed the polymers into a reaction vessel and applied a mechanical force via sonication, which rips the ring into two separate groups.

“The ring molecule can convert to one of three different products after being ripped apart, making it a good model for investigating NDEs,” Liu said. “The 13-C label allows us to track and measure the chemical changes occurring to the ring, making it distinct from thousands of other chemical bonds in the polymer.”

Liu hypothesizes that with the excitation of mechanical force, the atoms heat up along specific reaction directions, rather than following the directions shaped by the potential energy surface. The researchers named this departure from the conventional concept of chemical reactions a “flyby trajectory.”

“Using the hiking example, the hypothesis is equivalent to saying that the hiker just decided not to follow the map,” Liu said. “Instead, the hiker was excited enough to hop onto a hang-glider and just fly by between hills on their descent. As a result, the direction in which the molecules move becomes dependent on their initial jump, rather than the subsequent barrier height.”

Liu performed multiple experiments demonstrating the tunability of the flyby trajectory by increasing the mechanical force so that the reaction can increasingly overcome barriers. Ideally, researchers can turn an unselective reaction into a highly selective one where any side products formed are undetectable.

To support the experimental finding, Stanford University graduate student Soren Holm collected 10,000,000 computed geometries to construct a theoretical model of the potential energy surface and then extracted the speed of reaction trajectories under the presence of mechanical force.

“We found that early trajectories do not slow down when moving past the barriers,” Liu said.

In other words, barriers are flown past rather than being surmounted, which should have slowed down the chemical reaction rate, the researchers said. Over time, the molecules cool down, and subsequent trajectories follow the minimum energy path initially predicted.

“Our findings will give researchers a more complete understanding of how force can alter the course of chemical reactions to increase production efficiency,” Moore said. “It’s another tool in our toolbox to make the things we use every day.”