Many hormones and neurotransmitters work by binding to receptors on a cell’s exterior surface. This activates receptors causing them to twist, turn and spark chemical reactions inside cells. NIH scientists used atomic level images to show how the neuropeptide hormone neurotensin might activate its receptors. Their description is the first of its kind for a neuropeptide-binding G protein-coupled receptor (GPCR), a class of receptors involved in a wide range of disorders and the target of many drugs.

“G protein-coupled receptors are found throughout the body. Knowing how they work should help scientists devise better treatments,” said Reinhard Grisshammer, Ph.D., an investigator at the NIH’s National Institute of Neurological Disorders and Stroke (NINDS) and the senior author of the study. 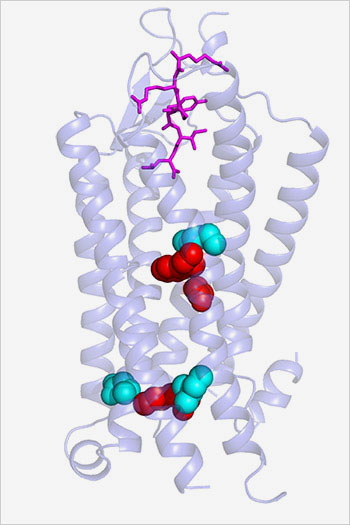 Neurotensin is thought to be involved in Parkinson’s disease, schizophrenia, temperature regulation, pain, and cancer cell growth. Previously, Dr. Grisshammer and his colleagues showed how neurotensin binds to the part of its receptor located on a cell’s surface. In this study, they demonstrated how binding changes the structure of the rest of the receptor, which passes through a cell’s membrane and into its interior. There neurotensin receptors activate G proteins, a group of molecules inside cells that controls a series of chemical chain reactions.

For these experiments, scientists shot X-rays at crystallized neurotensin receptor molecules. Making crystals of receptors that activate G proteins is difficult. In most studies, scientists have investigated inactive receptors.

“The receptor we crystallized is very close to the active form found in nature,” said Dr. Grisshammer. “We may have the first picture of a peptide-binding G protein-coupled receptor just before it engages with the G protein.”

To achieve their results, the scientists made multiple genetic modifications to a less active version of the neurotensin receptor they had used before. Experiments performed in test tubes showed that mixing the receptor with neurotensin sparked the G protein reactions for which the scientists were looking.

“For years scientists have made educated guesses about how peptide receptors work. Now we may finally know,” said Dr. Grisshammer.

His lab plans to continue its work in order to fully understand how neurotensin and other G protein-coupled receptors translate messages delivered by neuropeptides into reactions inside cells.