From the tension of contracting muscle fibers to hydrodynamic stresses within flowing blood, molecules within our bodies are subject to a wide variety of mechanical forces that directly influence their form and function. By analyzing the responses of single molecules under conditions where they experience such forces we can develop a better understanding of many biological processes, and potentially, develop more accurately acting drugs. But up until now experimental analysis of single molecule interactions under force have been expensive, tedious and difficult to perform because it requires use of sophisticated equipment, such as an atomic force microscope or optical tweezers, which only permit analysis of one molecule at a time.

Now, a research team led by Wesley Wong at Harvard's Wyss Institute for Biologically Inspired Engineering and Boston Children's Hospital has made a major advance by developing an inexpensive method that permits analysis of the force responses of thousands of similar molecules simultaneously. They report in Nature Communications how programmable DNA nanoswitches can be used in combination with a newly designed miniaturized Centrifuge Force Microscope (CFM) as a highly reliable tool to observe thousands of individual molecules and their responses to mechanical forces in parallel. 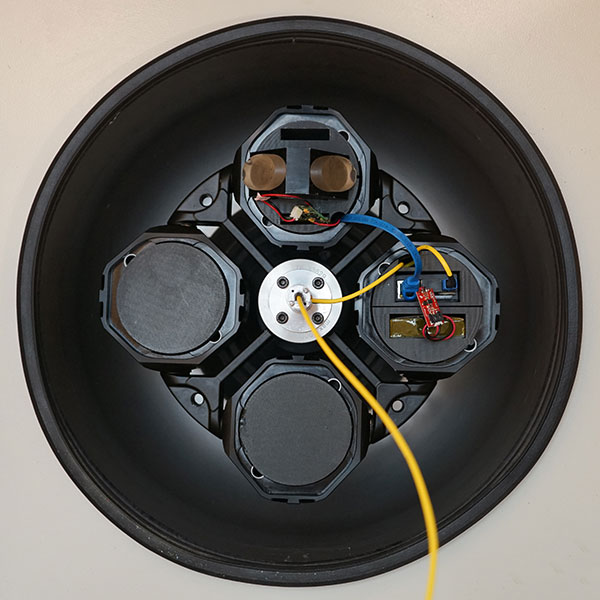 The benchtop CFM device, consisting of the CFM unit itself (on the top), parts for transmitting the camera signal as well as a battery (on the right), fits into two standard buckets of a common laboratory centrifuge that are balanced by counterweights in the respective opposite buckets. Credit: Wyss Institute at Harvard University

"This new combined approach will allow us and others to examine how single molecule complexes behave when they are thrown out of their equilibrium by the tunable force generated in our newly designed CFM. By basing this instrument on something that most researchers already have and use-the benchtop centrifuge-we hope to make single-molecule force measurements accessible to almost everyone," said Wong, Ph.D., who is a Wyss Institute Associate Faculty member and the study's senior author. He is also Assistant Professor at Harvard Medical School in the Departments of Biological Chemistry & Molecular Pharmacology and Pediatrics, and Investigator in the Program in Cellular and Molecular Medicine at Boston Children's Hospital.

Earlier efforts led by Wong at the Rowland Institute at Harvard introduced the first CFM in 2010, which was a highly specialized instrument that carried out high-throughput precision force measurements on single molecules by tethering them to beads and pulling at them using centrifugal force. In his latest CFM iteration, Wong and his team developed a way to carry out the same technique with similar precision using a small inexpensive microscope made from easy-to-assemble elements and 3D printed parts that can be inserted into the swinging bucket of a standard benchtop centrifuge found in virtually all biomedical research laboratories.

In addition, the team increased the robustness and accuracy of the assay by integrating thousands of so-called DNA nanoswitches, linear DNA strands with pairs of interacting molecules that are associated with two sequences in their middle and that, in addition, by binding to each other create an internal DNA loop; the nanoswitches' ends are tethered to the surface of the sample on one side and to beads on the other.

The picture on the top shows a DNA nanoswitch that forms a looped structure when a bond is formed between the attached reactive components (e.g. receptor-ligand pair shown in red and green); at one end it is attached to the sample stage and at the other to a bead (top). By applying centrifugal forces to the bead in the CFM device, the bond between the reactive components can be repeatedly ruptured, opening up the loop and increasing the length of the DNA tether (bottom), enabling highly reliable measurements of molecular interactions. In the CFM, many beads can be interrogated in parallel, enabling high-throughput single-molecule measurements (bottom left). In the video in the bottom right, the camera captures these rupture events in real time by registering the bead at a different spot. Credit: Wyss Institute at Harvard University

"By applying a defined range of centrifugal forces to the beads we can provoke the rupture of the molecular complexes generating the looped DNA structures which will be registered by the camera-coupled lens. Importantly, using DNA nanoswitches as a stable scaffold allows us to repeat this process multiple times with the very same molecule in temperature-controlled conditions which greatly enhances our accuracy in determining the heterogeneity that a single molecular interaction can display," said Darren Yang, the first author of the study and a Graduate Student in Wong's team.

In future research, bead-associated DNA nanoswitches can be employed to repeatedly assemble and rupture many different biomolecular complexes and to define the mechanical forces that control them. "The integrated DNA nanoswitches are very modular, and can be functionalized with many different biomolecules in essentially a plug-and-play fashion, to enable a wide variety of molecular interactions to be studied with high throughput and reliability," added Wong.

Next, the Wyss scientists are planning to apply their DNA nanoswitch-enhanced miniature CFM to the investigation of select biomedically relevant and force-dependent molecular interactions such as protein interactions governing blood clotting or hearing.

"Wong's team has created a new technology platform that greatly reduces the cost of single molecule force analysis and makes it widely accessible to the scientific community.  In addition to increasing our understanding of basic molecular structure-function relations, it may prove to be a valuable tool for drug development," said Wyss Institute Founding Director Donald Ingber, M.D., Ph.D., who is also the Judah Folkman Professor of Vascular Biology at Harvard Medical School and the Vascular Biology program at Boston Children's Hospital, and Professor of Bioengineering at SEAS.