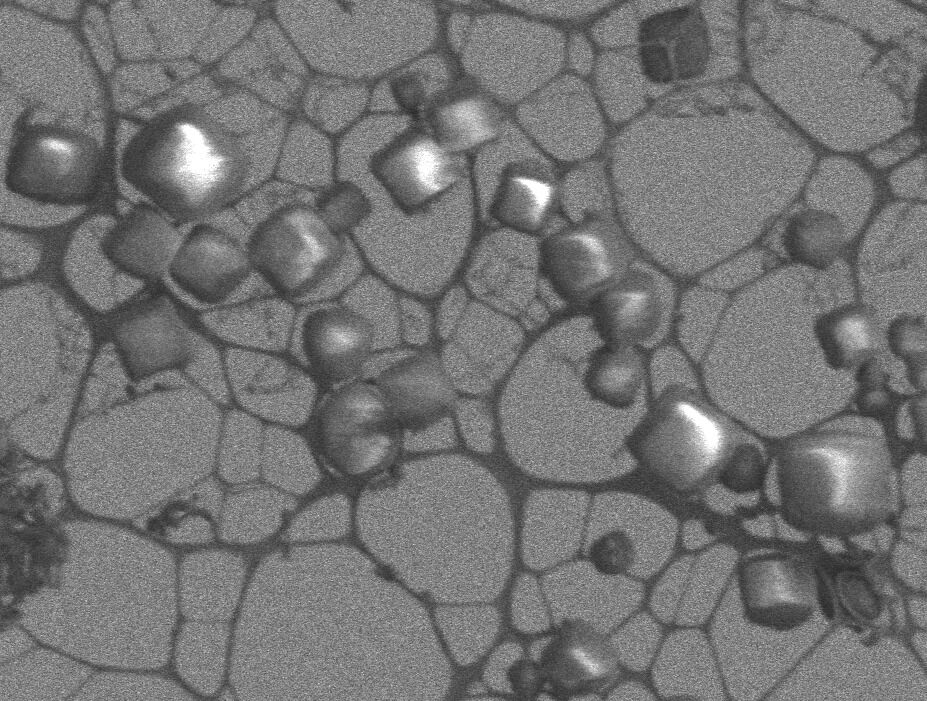 Dr Anna Warren is a Senior Support Scientist on VMXm, a new beamline currently under development and construction at Diamond Light Source where it will be used to carry out X-ray macromolecular crystallography experiments. Diamond offers 26 separate beamlines to aid with research groups in the UK and abroad, allowing them to determine the three dimensional structure of matter, such as protein molecules, on the atomic scale. This can help to aid with drug design and to assist in the understanding of how these proteins function. There are several beamlines already running at Diamond which allow the study of protein crystals ranging from 5-100 microns in size. However, as the systems get more complicated, inherently the crystals get smaller, so the beamline currently being built will allow the study of crystals ~500 nm to 5 microns in size.

Due to the small size of these crystals, Dr Warren is using a JEOL SEM to visualise the crystals and align them to the X-ray beam to carry out the experiments. The crystals are very fragile and prone to dehydration. This means they have to be stored, handled and studied at liquid nitrogen temperatures. This is where the Quorum PP3000T cryo-SEM preparation system has been of great use. Dr Warren takes up the story: “It has allowed us to visualise crystals less than a micron in size at cryogenic temperatures. This technique has never been used in our field in this way so we are currently carrying out a lot of research to understand the best ways of handling and preparing samples to obtain the best quality images. This would be impossible without having the Quorum preparation system and cryo-stage as the crystals would deteriorate in quality. Quorum was very helpful when we started looking at systems to purchase, especially as they have an SEM and cryo-SEM set up in Laughton. We were able to test out our samples in advance to get an understanding of whether it would work for us. Since making our purchase decision, we found that the preparation desk/slushing station have become a vital part of our sample preparation and this has been invaluable for our experiments.

The image at the top illustrates the data quality we get routinely — crystals of cytoplasmic polyhedrosis virus (CPV20). The crystals shown here are in the size range 2.5 to 5 µm.”

The Quorum PP3010T and PP3000T are highly automated, easy to use, column-mounted, gas-cooled cryo preparation systems suitable for most makes and models of SEM, FE-SEM and FIB/SEM. Highly efficient cooling allows temperatures of down to 190 °C to be routinely achieved. The systems include facilities for rapid freezing, cold fracturing, controlled sublimation and high resolution sputter coating. The typical process time for samples is between five and ten minutes.