Complete the form below and we will email you a PDF version of "Dirty,Crusty Meals Fit for (Long-Dormant) Microbes"

In deserts and other arid lands, microbes often form very thin top layers on soil known as biocrusts, which behave a bit like Rip Van Winkle. He removed himself from a stressful environment by sleeping for decades, and awoke to a changed world; similarly, the biocrust’s microbes lie dormant for long periods until precipitation (such as a sudden downpour) awakens them. Understanding more about the interactions between the microbial communities—also called “microbiomes”—in the biocrusts and their adaptations to their harsh environments could provide important clues to help shed light on the roles of soil microbes in the global carbon cycle.

“In support of DOE’s mission to untangle the complexities of the carbon cycle, we’re using the biocrust system to examine the specific metabolites in soil and how microbes target these compounds,” said Trent Northen, a scientist at Lawrence Berkeley National Laboratory (Berkeley Lab) and the U.S. Department of Energy Joint Genome Institute (DOE JGI), a DOE Office of Science User Facility. “Dissolved organic carbon (DOC) and soil microbes are typically studied as broad groups, and we wanted to examine the specific relationship between the diversity of soils metabolites and the diversity of microbes.” 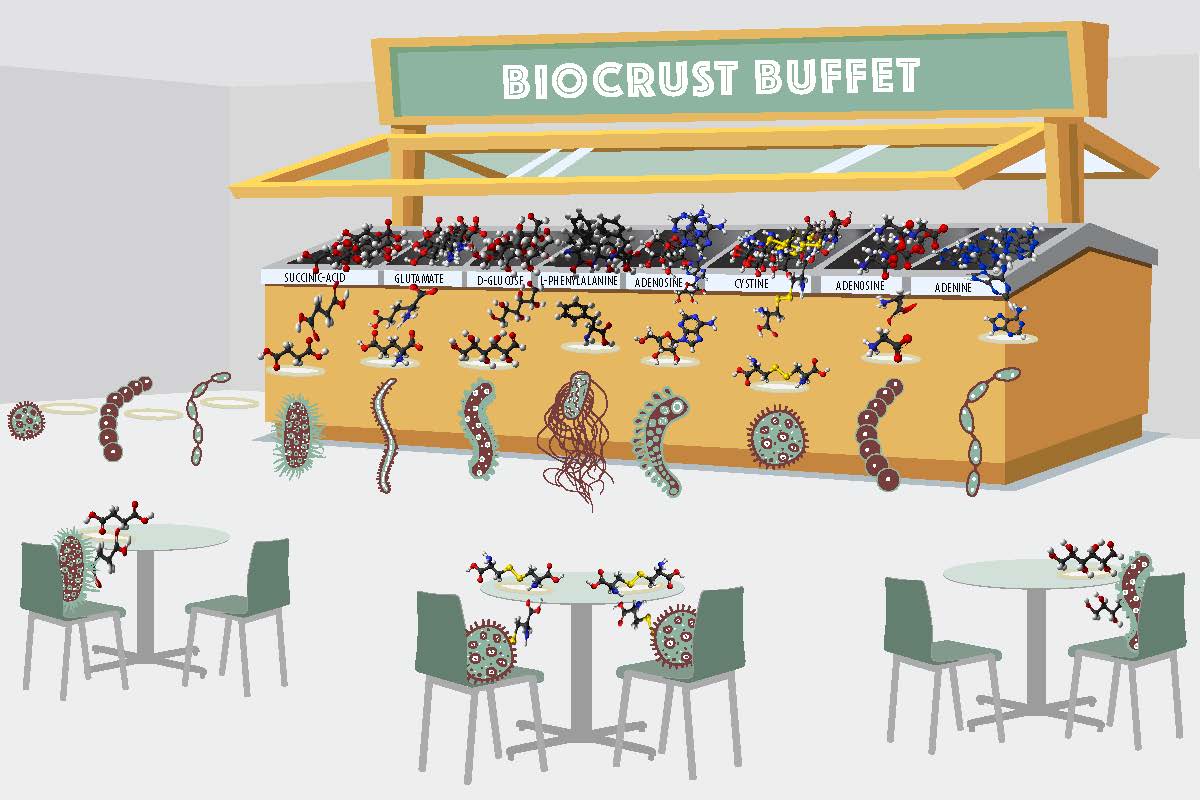 In a recently published study a team led by Northen used seven bacterial isolates from desert biocrusts, one of them the cyanobacterium Microcoleus vaginatus –sequenced by the DOE JGI—that had been the focus of earlier work. The isolates were cultivated in what Northen describes as “a virtual smorgasbord” of metabolites containing almost 500 compounds until they stopped growing. Northen and his collaborators deployed a set of tools that he calls “exometabolomics” which harnesses the analytical capabilities of the latest mass spectrometry techniques to quantitatively measure how each microbes and the biocrust community transforms complex mixtures of metabolites, in this case, from soil.

“Traditionally, researchers have applied broad categories when studying soil carbon and microbes, like grouping the foods and people at a buffet into broad groups and measuring the total calories each group of people eats,” said Northen. “But people at a buffet don’t all eat the same things; vegetarians won’t touch the meats, others are allergic to gluten and so on. In the same way, the biocrusts are a big buffet and we find in our study that they each use different fractions of DOC, so it takes a community to consume a buffet.”

“We were surprised to find that the diverse microbes we examined each targeted specific metabolites, where individual isolates only used a small range—13-26 percent—of the metabolites,” says the study’s first author Richard Baran also from Berkeley Lab. Even more surprising to the research team was the lack of overlap in the microbes’ substrate preferences, where only a few metabolites were consumed by all.

“This may be an important mechanism to help support diverse microbes in soil,” said Northen. “If each type of microbes targets unique metabolites they could avoid pure competition by specialization, yet in aggregate they metabolize complex carbon pools. By eating different items on the menu, the metabolites could be helping to support more microbial diversity.”

Another observation Northen noted from these results is that in many cases, metabolites that are found to be released by one microbe are consumed by another. The discovery suggests that there may be a food web in the biocrusts microbiomes in which individual microbes may depend on each other for specific metabolites. “Essentially, microbes won’t eat each other’s lunch if they depend on the other for a specific metabolite,” Northen said, describing this possible mechanism in support of soil biodiversity.

Though the biocrusts that the team focused on in this paper comprise a fairly simple model system, they say they plan to apply exometabolomics to more complex soil systems and more microbes. “What we’re really trying to define is what is the connection between the diversity of metabolites and microbial diversity? What are the specific compounds, and how are those specific compounds transformed by specific microbes,” said Northen. “This is exometabolomics.”

The team’s long-term goal is to develop exometabolomics as a predictive tool. By linking sequence data with soil carbon cycling, Northen said, researchers could, for example, take a metagenome and predict what metabolites are present in the environment.

“This novel application of metabolomics to microbial ecology,” said Ferran Garcia-Pichel, Dean of Natural Sciences, College of Liberal Arts and Sciences, Arizona State University and one of the paper’s senior authors, “is especially exciting because it brings about the potential to directly link modern genomic advances with much of the traditional knowledge of microbial metabolism, with added value to both.”