Imaging the Gut with NanoTech

Imaging the Gut with NanoTech 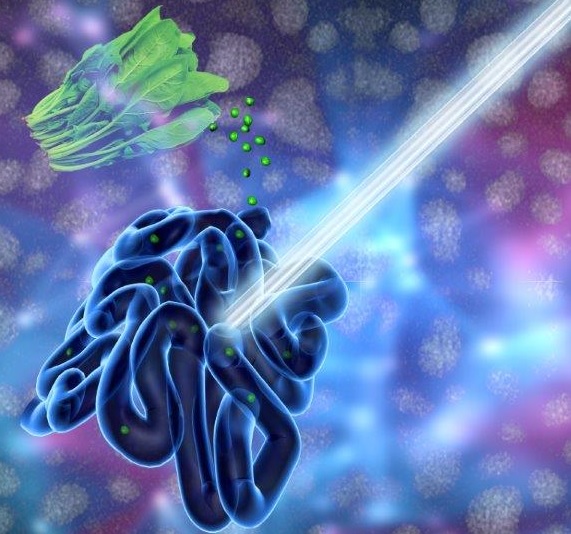 The pigment that gives spinach and other plants their verdant colour may improve doctors’ ability to examine the human gastrointestinal tract.

That’s according to a study — "Surfact-Stripped Frozen Phephytin Micelles for Multimodal Gut Imaging" published July 11, 2016 in the journal Advanced Materials — which describes how chlorophyll-based nanoparticles suspended in liquid are an effective imaging agent for the gut.

“Our work suggests that this spinach-like, nanoparticle juice can help doctors get a better look at what’s happening inside the stomach, intestines and other areas of the GI tract,” says Jonathan Lovell, PhD, assistant professor in the Department of Biomedical Engineering, a joint program between UB’s School of Engineering and Applied Sciences and the Jacobs School of Medicine and Biomedical Sciences at UB, and the study’s corresponding author.

To examine the gastrointestinal tract, doctors typically use X-rays, magnetic resonance imaging or ultrasounds, but these techniques are limited with respect to safety, accessibility and lack of adequate contrast, respectively.

Doctors also perform endoscopies, in which a tiny camera attached to a thin tube is inserted into the patient’s body. While effective, this procedure is challenging to perform in the small intestine, and it can cause infections, tears and pose other risks.

The new study, which builds upon Lovell’s previous medical imaging research, is a collaboration between researchers at UB and the University of Wisconsin-Madison. It focuses on Chlorophyll a, a pigment found in spinach and other green vegetables that is essential to photosynthesis.

In the laboratory, researchers removed magnesium from Chlorophyll a, a process which alters the pigment’s chemical structure to form another edible compound called pheophytin. Pheophytin plays an important role in photosynthesis, acting as a gatekeeper that allows electrons from sunlight to enter plants.

Next, they dissolved pheophytin in a solution of soapy substances known as surfactants. The researchers were then able to remove nearly all of the surfactants, leaving nearly pure pheophytin nanoparticles.

The drink, when tested in mice, provided imaging of the gut in three modes: photoacoustic imaging, fluorescence imaging and positron emission tomography (PET). (For PET, the researchers added to the drink Copper-64, an isotope of the metal that, in small amounts, is harmless to the human body.)

Additional studies are needed, but the drink has commercial potential because it:

In lab tests, mice excreted 100 percent of the drink in photoacoustic and fluorescence imaging, and nearly 93 percent after the PET test.

“The veggie juice allows for techniques that are not commonly used today by doctors for imaging the gut like photoacoustic, PET, and fluorescence,” Lovell says. “And part of the appeal is the safety of the juice.”