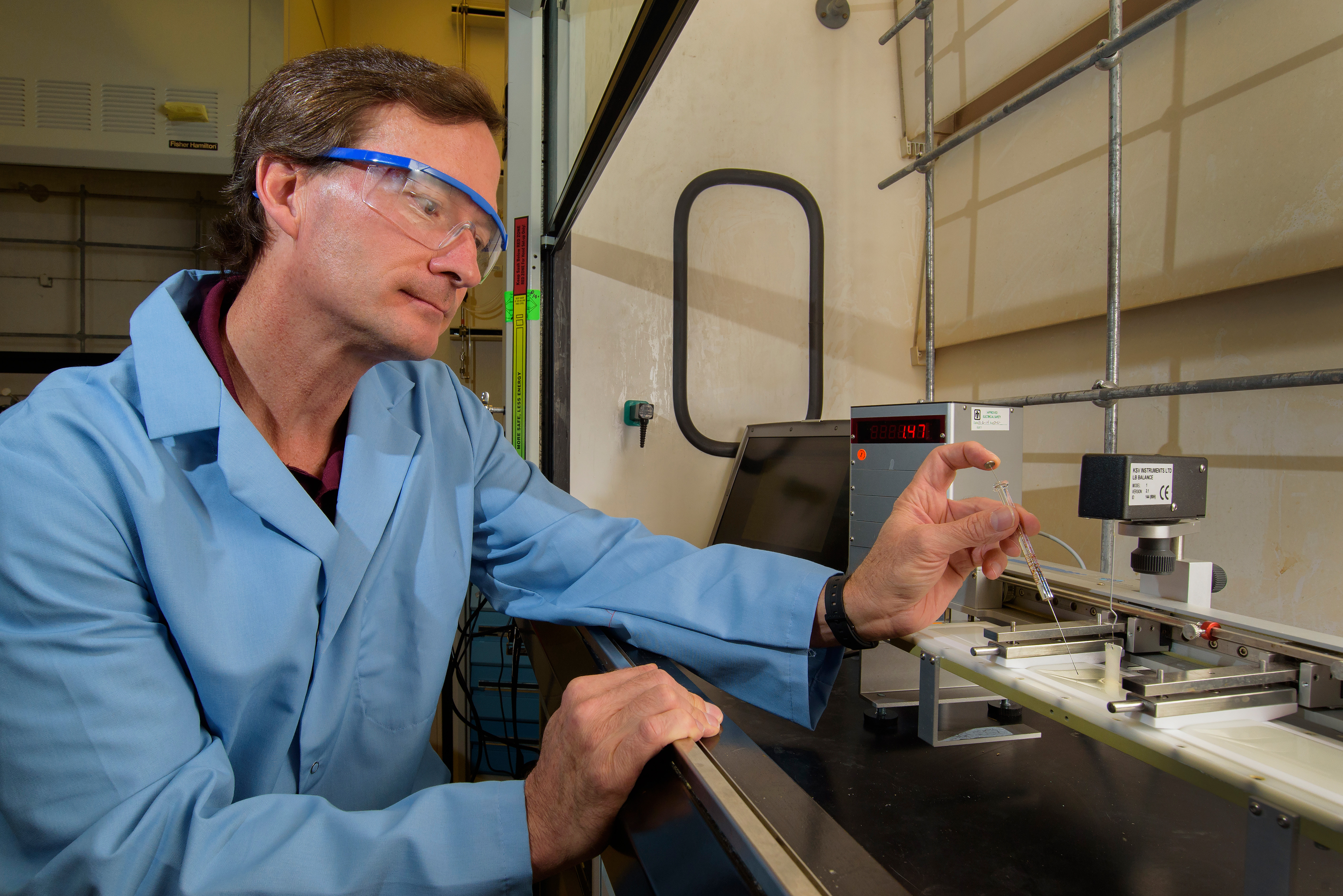 More than 36 million people worldwide, including 1.2 million in the U.S., are living with an HIV infection. Today’s anti-retroviral cocktails block how HIV replicates, matures and gets into uninfected cells, but they can’t eradicate the virus.

Mike Kent, a researcher in Sandia National Laboratories’ Biological and Engineering Sciences Center, is studying a protein called Nef involved in HIV progression to AIDS with the ultimate goal of blocking it. He and his collaborators have developed a new hybrid method to study this HIV protein that compromises the immune system. The method also could work on many other proteins that damage cellular processes and cause diseases.

Nef goes to the membrane of the infected cell and tricks the cell into destroying its own immune system signaling receptors, allowing the infected cell to evade the immune system. Nef also hijacks cellular communications to make it easier for the virus to reproduce. In order to interact with the host proteins, Nef needs to change shape.

This shape-changing protein is so important that rhesus monkeys infected with a version of the closely related Simian immunodeficiency virus that lacks the Nef protein don’t develop immune deficiency symptoms.

“Nef is a protein essential for AIDS. It accomplishes its missions by altering signaling and receptor trafficking. It binds to critical immune system receptors and then signals your cells to destroy them. If you know how this protein works, you have a better shot at developing drugs to stop it,” said Kent.

Kent is an expert at neutron reflectometry, a technique that gets nanometer-scale structural information about films and biological membranes. His team used this technique to compare the global structure of Nef in its membrane-bound form versus its inactive, membrane-free form.

The global information from the neutron reflectometry shows only the average location of Nef relative to the membrane. The local dynamics from hydrogen-deuterium exchange mass spectrometry are acquired for many small portions of the protein, showing the flexibility of 30 overlapping sections that collectively cover 90 percent of Nef. Together they construct a more complete picture of Nef and its structural changes.

The global and local, peptide-specific information supported a widely held assumption that, in binding to the membrane, Nef changes its structure to interact with signaling receptors and other host proteins: a hypothesis without support, until now.

“People have been studying Nef for a long time and there was a model of what people thought the protein might look like and might do. Nef is a difficult protein to study because you can only crystalize the folded part of the protein, and about half of the protein is unstructured. In addition, you can’t study the membrane-bound form by crystallography,” said Kent.

“It’s the first time anybody had measured these kinds of structural changes and the results were consistent with the hypothetical model,” Kent continued. “Details of these shape changes provide important new molecular insights into how Nef functions.” This method could lead to new assays for drug screening.

To combine the two techniques, the team first needed to make a special apparatus. It needed to contain a flat lipid monolayer, made of saturated fats, which mimicked the biological membrane. It also had to be integrated with equipment at neutron sources for neutron reflection measurements, and allow rapid exchange of the watery support layer for the hydrogen-deuterium exchange experiments.

Another challenge was correctly producing the Nef protein. In infected cells, Nef is tagged with a special lipid that serves to anchor Nef to the cell membrane. Engen’s team had to produce Nef that contained this essential lipid, known as a myristate group.

New method could answer many questions about HIV, other diseases

With the hybrid method and unique apparatus in hand, the team is seeking funds to answer additional questions about Nef.

“We studied it alone; now we want to study it with its binding partners, with the host proteins and the complexes that it forms, and in the presence of drug molecules or inhibitors,” Kent said. “Stopping it from binding with its partners or inhibiting it from adopting the conformation that leads to receptor degradation would have important medical implications.”

Tom Smithgall of the University of Pittsburgh School of Medicine, a co-author on one of the team’s papers, is currently screening for potential drugs that might block Nef’s actions.

Kent also hopes to apply this hybrid method to other important structural problems of membrane-associated proteins, including virus maturation; the fusion of viruses with host cell membranes; the workings of bacterial toxins such as botulinum, tetanus and diphtheria; and cell-signaling dysfunctions ranging from cancer to regulating cholesterol levels.

“There is a lot of potential for combining these two techniques in a more general sense. There are no other ways to get this kind of specific, direct information about essential membrane proteins. This is a significant niche of biological problems that could not be addressed before our work, and we’ve made some big steps forward. The future benefit depends on how broadly we can apply the method beyond just this one HIV protein,” said Kent.