Complete the form below and we will email you a PDF version of "Monitoring Changes, Variability in Blood" 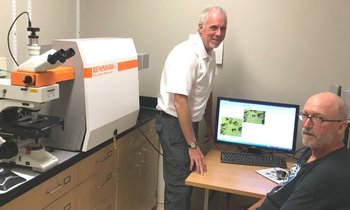 The Michael Smith Laboratories at the University of British Columbia, Canada, is leading the way in the use of Raman spectroscopy as a tool for monitoring biochemical changes and inter-donor variability in stored red blood cell (RBC) units. The research group of Professors Michael Blades and Robin Turner recently published this work in the Analyst.

For this work the group collaborated with the Canadian Blood Services, using Raman microspectroscopy (RMS) to investigate the chemical changes that occur in red blood cells (RBC's), during storage in bags, which could eventually be used as a quality check prior to transfusion. The group illustrated how the inVia could be used to analyse bulk properties of a sample, both in a conventional microscopy mode, and with a laser offset by using the inVia's software controlled beam steering capabilities. The laser and collection optics were purposely aligned to implement a spatially-offset Raman spectroscopy (SORS) measurement at a set position, enabling analysis of the blood with minimal interference from the bag material.

In addition, the group study bio-analytical applications with RMS, in particular spatially resolved analyses using the Renishaw inVia. To date, it has used RMS to characterise single cells and populations of cells in vitro as they respond to a variety of chemical and environmental stimuli, including those triggering differentiation, autophagy, necrosis and apoptosis. It also uses RMS for the sub-cellular analyses of glycogen and nucleoli.

The group has worked with Renishaw since the late 1990s when it used an RM-1000 system which “performed flawlessly and served as a workhorse for many years.” Describing the more recent instrumental developments, Professor Turner said, “In 2009 we traded that system for a refurbished inVia platform in order to take advantage of the StreamLine™ mapping technology and, in 2015, purchased a new inVia system. We now have two inVia systems operating in our lab and both are heavily used –mainly by us– but also by a growing number of external users on a fee-for-use basis. The robustness and ease of use of the inVia make it feasible to quickly train some of the more frequent external users so they can do their measurements without our personnel standing by.”

“Our dealings with Renishaw have been a very positive experience. The StreamLine feature is very useful to us and the WiRE software is powerful and easy to use. We have also been very happy with the service and support that we have received from Renishaw and ProSpect Scientific (Renishaw's Canadian representative). The platform is flexible and we have exploited that to, for example, implement a fluorescence imaging microscopy system that uses the same microscope and hence can be used to image the same sample by fluorescence and Raman, and to implement SORS.”