Based at the Manchester Institute of Biotechnology (MIB), researchers have identified the exact mechanism and structure of two key enzymes isolated from yeast moulds that together provide a new, cleaner route to the production of hydrocarbons. Published in Nature, the research offers the possibility of replacing the use of oil in current industrial processes with a greener and more sustainable natural process. 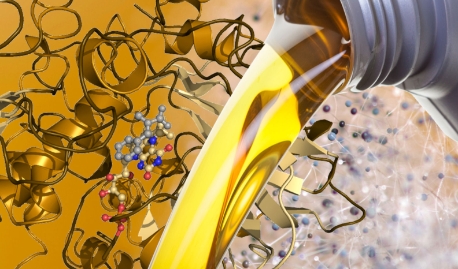 Lead investigator, Professor David Leys, explains the importance of his work: “One of the main challenges our society faces is the dwindling level of oil reserves that we not only depend upon for transport fuels, but also plastics, lubricants, and a wide range of petrochemicals. Solutions that seek to reduce our dependency on fossil oil are urgently needed.”
He adds: “Whilst the direct production of fuel compounds by living organisms is an attractive process, it is currently not one that is well understood, and although the potential for large-scale biological hydrocarbon production exists, in its current form it would not support industrial application, let alone provide a valid alternative to fossil fuels.”
Professor Leys and his team investigated in detail the mechanism whereby common yeast mould can produce kerosene-like odours when grown on food containing the preservative, sorbic acid. They found that these organisms use a previously unknown modified form of vitamin B2 (flavin) to support the production of volatile hydrocarbons that cause the kerosene smell. Their findings also reveal that the same process is used to support synthesis of vitamin Q10 (ubiquinone).
Using Diamond’s macromolecular crystallography (MX) Beamlines, the group were able to garner atomic level insights into this bio catalytic process. They discovered that it shares similarities with procedures commonly used in chemical synthesis but previously thought not to occur in nature.
Professor David Leys says: “Now that we understand how yeast and other microbes can produce very modest amounts of fuel-like compounds through this modified vitamin B2-dependent process, we are in a much better position to try to improve the yield and nature of the compounds produced.”
In this particular study, researchers focussed on the production of alpha-olefins, a high value, industrially crucial intermediate class of hydrocarbons that are key chemical intermediates in a variety of applications, such as flexible and rigid packaging and pipes, synthetic lubricants used in heavy duty motor and gear oils, surfactants, detergents, and lubricant additives.
Professor Leys concludes: “This fundamental research builds on the MIB’s expertise in enzyme systems and provides the basis for the development of new applications in biofuel and commodity chemical production. The insights from this research offer the possibility of circumventing current industrial processes which are reliant on scarce natural resources.”
White, M. D. et al. UbiX is a flavin prenyltransferase required for bacterial ubiquinone biosynthesis. Nature (2015). http://dx.doi.org/10.1038/nature14559 (2015).
Payne, K.A.P. et al. New cofactor supports alfa-beta-unsaturated acid decarboxylation via 1,3-dipolar cycloaddition. Nature (2015) http://dx.doi.org/10.1038/nature14560
Related Topics
Petrochemicals
Advertisement
Chosen for You
Webinar

The Future of Zero Waste Lies in the Circular Economy