When an explosion beneath the sand at Salty Brine State Beach in Narragansett injured a visiting vacationer, state and local police and the bomb squad found no evidence of what may have caused the blast. So state officials turned to scientists at the University of Rhode Island’s Graduate School of Oceanography for answers. It didn’t take long before they had solved the mystery.

Janet Coit, director of the Rhode Island Department of Environmental Management, which operates the state beaches, contacted Oceanography Dean Bruce Corliss, who turned to Professor John King, an expert on coastal geology, and Professor Arthur Spivack, whose knowledge of the chemistry of ocean sediments would quickly come into play.

“After the bomb squad had ruled out explosives, terrorism and old munitions, the hypothesis was that there could have been a significant source of methane in the sand,” said Spivack, who studies biologically-produced methane in ocean sediments. “Methane is produced almost everywhere in the ocean. And in the nearshore environment there is often a lot of buried peat, and that’s a potential source of methane. So it was a realistic hypothesis.” 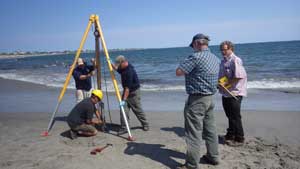 But methane wasn’t the only realistic hypothesis promulgated by URI scientists. Professor Brian Heikes walked into Spivack’s office and suggested an alternative idea – hydrogen. He proposed that hydrogen might have been created through an electrochemical process by an abandoned underground cable discovered at the site of the explosion. Spivack was skeptical at first, but Heikes convinced him to keep an open mind. And neither man came up with any other likely scenarios.

As beachgoers and the media watched, King gathered a team of faculty and graduate students, along with soil scientists from the Natural Resource Conservation Service, to collect several sediment cores up to 5 feet deep. Back at a lab at the URI Narragansett Bay Campus, doctoral students Justine Sauvage and Kira Homola worked long hours through the weekend slicing up the cores, placing samples into test tubes, sealing the test tubes to allow the gases to diffuse from the sand, and using a hypodermic needle to collect the gas. They then injected the contents of the needle into a gas chromatograph, which separates out the different gases and calculates the quantities of each.

Spivack said the researchers were lucky to have Sauvage as part of the team. A native of Belgium, she is an expert on the analysis of hydrogen in sand and sediments and “one of a handful of people in the country who could just walk on the scene and do the work. We were uniquely capable of responding to this situation because of her skills,” he said.

Sauvage’s doctoral dissertation examines how naturally occurring radioactivity in the ocean leads to the production of hydrogen. She uses the gas chromatograph at least weekly and has conducted hundreds of analyses of sediment samples in the last few years.

“There are a lot of intricate details involved in getting a reliable measurement from the instrument, and it can take up to a week just to set it up and calibrate it,” Sauvage said. “But since I’ve been doing it weekly for more than two years, it was really easy because it was ready to go.”

While the samples were being analyzed, Spivack visited Salty Brine State Beach for the first time since the explosion and observed the cable that had been 3 feet below the injured beachgoer when the blast occurred. He noted that the copper cable and steel sheath around it were clean and uncorroded.

“The copper was like a shiny new penny, and the steel was silvery, even though it had been in seawater for many years,” Spivack said. “That told me that it was consistent with there being a slight negative voltage in that end of the cable, which protects it from corroding but also could produce hydrogen.” The rest of the 30-foot cable was highly corroded.

When he looked at the results of the gas chromatography, Spivack knew the mystery was solved. It showed exceptionally high levels of hydrogen in a few pockets just beneath the area of the explosion, far higher levels than Sauvage had ever previously measured. Hydrogen is typically recorded at just a few parts per million, but in the beach sand there were up to 50,000 parts per million, which could easily have become flammable. Methane, the other gas that was hypothesized as the cause of the explosion, was found at barely detectable levels. When additional sediment cores were collected and analyzed, the results were the same.

Spivack explained that corrosion in the underground cable is like a short-circuited battery in salt water. As the cable corrodes at one end, electrons travel through the metal to the opposite end, protecting it from corrosion and leaving it shiny and clean while producing hydrogen that dissipates into the sand. He calls it “really simple chemistry.”

But how did it explode?

That’s simple, too. Hydrogen needs very little energy to ignite, approximately one tenth as much as it takes to light a gas stove, so the spark could have come from static electricity, a cigarette ember or other common source. When hydrogen combusts, it does not produce visible flames, nor does it radiate much heat, which explains why no one saw any flames or got burned by the explosion. And a hydrogen blast leaves behind no ash or other residue to indicate an explosion even happened. It only produces water.

To ensure that beachgoers could safely return to the site of the explosion, the researchers conducted additional tests and found that excavation of the sands in the area of the blast had released any residual hydrogen, making another blast nearly impossible.

To Spivack, the explosion occurred as a result of a confluence of simple scientific principles. But solving the mystery took “the commitment of a world-class graduate school. If it happened at some other place along the East Coast, it would have been difficult to find someone nearby who could provide the answer,” he said. “We just happen to have the right people and a uniquely collegial environment that brought a group of people together to figure it out. We solved this mystery because the Graduate School of Oceanography has been able to attract good people to come to Rhode Island.”

State officials agree, and many offered accolades for the work of the URI researchers. Gov. Gina Raimondo said, “I’m grateful to the extraordinary scientists at URI, especially the team from the Graduate School of Oceanography, whose hard work led to this explanation. Having the talent and research expertise of the teams at URI to turn to for quick results has proven invaluable.”

DEM Director Coit added, “The talented scientists at our world renowned Graduate School of Oceanography at URI have given us an explanation for what happened when the ground shook at our beach.”

The night before the press conference announcing the results of the investigation, Spivack spent a great deal of time thinking about how to explain his findings in a way that would be both scientifically valid and understandable to non-scientists. It was the first press conference in which he had ever participated, and it generated stories in more than 300 news outlets around the world. The big question that many reporters asked him was how likely is it that another beach could experience a similar explosion.

“You can’t build a probability theory about an event that has only occurred once,” he told them. “But the fact that it occurred once tells you that there’s really a very low probability of it ever happening again.”