The Brain is Not as Cramped as We Thought

The Brain is Not as Cramped as We Thought

To study the fine structure of the brain, including its connections between neurons, the synapses, scientists must use electron microscopes. However, the tissue must first be fixed to prepare it for this high magnification imaging method. This process causes the brain to shrink; as a result, microscope images can be distorted, e.g. showing neurons to be much closer than they actually are. EPFL scientists have now solved the problem by using a technique that rapidly freezes the brain, preserving its true structure. 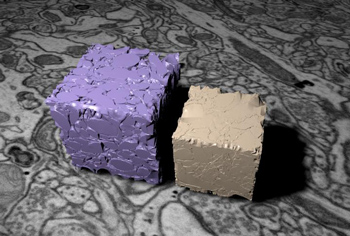 Recent years have seen an upsurge of brain imaging, with renewed interest in techniques like electron microscopy, which allows us to observe and study the architecture of the brain in unprecedented detail. But at the same time, they have also revived old problems associated with how this delicate tissue is prepared before images can be collected.

Typically, the brain is fixed with stabilizing agents, such as aldehydes, and then encased, or embedded, in a resin. However, it has been known since the mid-sixties that this preparation process causes the brain to shrink by at least 30 percent. This in turn, distorts our understanding of the brain’s anatomy, e.g. the actual proximity of neurons, the structures of blood vessels etc.

A study by Graham Knott at EPFL, led by Natalya Korogod and working with Carl Petersen, has successfully used an innovative method, called “cryofixation”, to prevent brain shrinkage during the preparation for electron microscopy. The method, whose roots go back to 1965, uses jets of liquid nitrogen to “snap-freeze” brain tissue down to -90oC, within milliseconds. The brain tissue here was mouse cerebral cortex.

The rapid freezing method is able to prevent the water in the tissue from forming crystals, as it would do in a regular freezer, by also applying very high pressures. Water crystals can severely damage the tissue by rupturing its cells. But in this high pressure freezing method, the water turns into a kind of glass, preserving the original structures and architecture of the tissue.

The next step is to embed the frozen tissue in resin. This requires removing the glass-water and replacing it first with acetone, which is still a liquid at the low temperatures of cryofixation, and then, over a period of days, with resin; allowing it to slowly and gently push out the glassified water from the brain.

After the brain was cryofixed and embedded, it was observed and photographed in using 3D electron microscopy. The researchers then compared the cryofixed brain images to those taken from a brain fixed with an “only chemical” method.

The analysis showed that the chemically fixed brain was much smaller in volume, showing a significant loss of extracellular space – the space around neurons. In addition, supporting brain cells called “astrocytes”, seemed to be less connected with neurons and even blood vessels in the brain. And finally, the connections between neurons, the synapses, seemed significantly weaker in the chemically-fixed brain compared to the cryofixed one.

The researchers then compared their measurements of the brain to those calculated in functional studies – studies that measure the time it takes for a molecule to travel across that brain region. To the researchers’ surprise, the data matched, adding even more evidence that cryofixation preserves the real anatomy of the brain.

“All this shows us that high-pressure cryofixation is a very attractive method for brain imaging,” says Graham Knott. “At the same time, it challenges previous imaging efforts, which we might have to re-examine in light of new evidence.” His team is now aiming to use cryofixation on other parts of the brain and even other types of tissue.