In plants as in animals and humans, intricate molecular networks regulate key biological functions, such as development and stress responses. The system can be likened to a massive switchboard—when the wrong switches are flipped, genes can be inappropriately turned on or off, leading to the onset of diseases.

Now, VARI scientists have unraveled how an important plant protein, known as TOPLESS, interacts with other molecules responsible for turning genes off. The findings in plants provide a general model across species for this type of gene silencing, which is linked to several vital biological functions in humans. 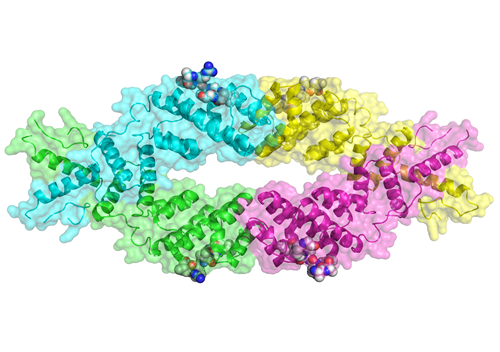 “This is really a fundamental discovery—our structure shows the corepressor TOPLESS interacting with key repressor motifs, which constitutes a major component of gene silencing in plants,” said Van Andel Research Institute’s Karsten Melcher, Ph.D., one of the study’s corresponding authors. “Understanding this interaction in plants gives us unique insight into similar pathways in humans that involve these proteins, which are notoriously tough to investigate.”

Using a method called X-ray crystallography, the team determined the three- dimensional structure of TOPLESS, both on its own and when linked with other molecules responsible for turning genes off, thereby regulating gene expression. Although these interacting molecules were chosen from different signaling pathways in plants, they all linked up with TOPLESS in the same manner

“This structure will allow us to take a more targeted approach to investigating TOPLESS’s counterparts in humans and significantly expands our knowledge base,” said VARI’s H. Eric Xu, Ph.D., who also is a corresponding author. “We’re extremely excited to continue this work to better understand these proteins and how they interact with other molecules in health and disease states.”

The new paper is the third in a trio of publications that unveil key components of fundamental molecular processes. Although the new study provides further insight into human molecular pathways, the work also directly describes how components of the molecular switchboard in plants interact to regulate responses to a multitude of stressors, including temperature fluctuations. The new findings follow an earlier Nature paper, which was included in the top ten list of scientific breakthroughs of 2009 by Science Magazine, and an earlier Science paper, both of which describe how plants respond to drought and temperature stress. Taken together, the papers not only have implications for developing hardier plants but also for determining molecular structures for components of entire pathways.