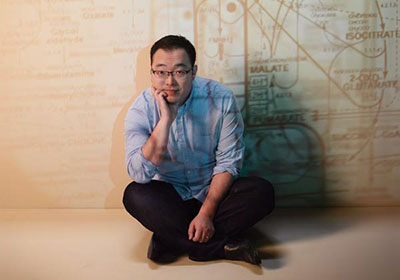 UC Berkeley researchers have found a long-elusive Achilles’ heel within “triple-negative” breast tumors, a common type of breast cancer that is difficult to treat. The scientists then used a drug-like molecule to successfully target this vulnerability, killing cancer cells in the lab and shrinking tumors in mice.

“We were looking for targets that drive cancer metabolism in triple-negative breast cancer, and we found one that was very specific to this type of cancer,” said Daniel K. Nomura, an associate professor of chemistry and of nutritional sciences and toxicology at UC Berkeley and senior author for the study, which is published online ahead of print in Cell Chemical Biology.

Triple-negative breast cancers do not rely on the hormones estrogen and progesterone for growth, nor on human epidermal growth factor receptor 2 (HER2). Because they do not depend on these three targets, they are not vulnerable to modern hormonal therapies or to the HER2-targeted drug Herceptin (trastuzumab).

Tumor cells develop abnormal metabolism, which they rely on to get the energy boost they need to fuel their rapid growth. In their new study, the research team used an innovative approach to search for active enzymes that triple-negative breast cancers use differently for metabolism in comparison to other cells and even other tumors.

They discovered that cells from triple-negative breast cancer cells rely on vigorous activity by an enzyme called glutathione-S-transferase Pi1 (GSTP1). They showed that in cancer cells, GSTP1 regulates a type of metabolism called glycolysis, and that inhibition of GSTP1 impairs glycolytic metabolism in triple-negative cancer cells, starving them of energy, nutrients and signaling capability. Normal cells do not rely as much on this particular metabolic pathway to obtain usable chemical energy, but cells within many tumors heavily favor glycolysis.

Co-author Eranthie Weerapana, an associate professor of chemistry at Boston College, developed a molecule named LAS17 that tightly and irreversibly attaches to the target site on the GSTP1 molecule. By binding tightly to GSTP1, LAS17 inhibits activity of the enzyme. The researchers found that LAS17 was highly specific for GSTP1, and did not attach to other proteins in cells.

According to Nomura, LAS17 did not appear to have toxic side effects in mice, where it shrank tumors grown to an invasive stage from surgically transplanted, human, triple-negative breast cancer cells that had long been maintained in lab cultures.

The research team intends to continue studying LAS17, Nomura said, with the next step being to study tumor tissue resected from human triple-negative breast cancers and transplanted directly into mice.

“Inhibiting GSTP1 impairs glycolytic metabolism,” Nomura said. “More broadly, this inhibition starves triple-negative breast cancer cells, preventing them from making the macromolecules they need, including the lipids they need to make membranes and the nucleic acids they need to make DNA. It also prevents these cells from making enough ATP, the molecule that is the basic energy fuel for cells.”

Beyond the metabolic role they first sought to track down, GSTP1 also appears to aid signaling within triple-negative breast cancer cells, helping to spur tumor growth, the researchers found.

Nomura said it was surprising that a single, unique target emerged from the research team’s search.

The method used by the researchers, called “reactivity-based chemoproteomics,” can quickly lead to specific targetable sites — the Achilles’ heels — on proteins of interest, and eventually to drug development strategies, Nomura said.

The approach is to search for protein targets that are actively functioning within cells, instead of first using the well-trod path of surveying all genes to identify the specific genes that have taken the first step toward protein production. With that more conventional strategy, the switching on, or “expression,” of genes is evidenced by the easily quantified molecule called messenger RNA, made by the cell from a gene’s DNA template.

Nomura’s team instead first used chemical probes that can react with certain configurations of two of the amino acid building blocks of protein — cysteine and lysine — known to be involved in several kinds of important structural and functional transitions that active proteins can undergo.

“A lot can happen after the first step in protein production, and we believe our method for identifying fully formed, active proteins is more useful for tracking down relevant differences in cellular physiology,” Nomura said.

The scientists used a chemical identification technique known as mass spectrometry to narrow down the set of proteins that had active lysines and cysteines to just those that were metabolic enzymes. Only then did they use the more conventional approach of measuring gene expression in the different cancer cell types.