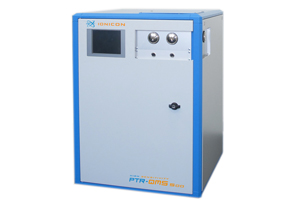 IONICON CEO Lukas MÄRK explains the idea behind many improvements of the new flagship quadrupole-based PTR-MS series: “We wanted to create a new generation of instruments providing the highest sensitivity available in the PTR-MS market but also incarnating new features and improvements we developed listening to the needs and feedback of our customers.”

The PTR-QMS 500 series is engineered to again lead the field of quadrupole based PTR-MS systems and outpace everything that existed in this market before. Among the many improvements, IONICON engineers were able to reduce the size and weight of the instruments, but nevertheless improved maintainability. A touchscreen display is now common to all IONICON instruments, a new heating chamber layout (easier access to ion source and space for extensions) is implemented and new control electronics (fully software controlled) as well as more interfaces (I/Os) are available. Most outstanding however is the new IONICON ULTRA-PURE ion source that delivers a precursor ion intensity that was never seen before and therefore the High-Sensitivity PTR-QMS 500 continuously quantifies VOCs in lowest possible concentrations touching even the ppqv-regime.

The PTR-QMS 500 series is the 4th generation of PTR-MS systems developed and commercialized by IONICON Analytik GmbH, Innsbruck Austria.

The Latest Workflows for Gene Therapy and Vaccine Analysis