Pesticides have become an integral part of the modern farming process due to their usefulness in preventing crop losses to pests, weeds and disease.1 With the United Nations “2030 Agenda for Sustainable Development” goals2 placing a renewed emphasis on sustainable farming technologies and environmental safety, demand is increasing for screening techniques that can detect and monitor the presence of excess pesticide residues in the environment.

Despite such demand, it is still relatively rare for pesticide testing to occur on-site during farming. For pesticide residues on crops and foodstuffs, it is most common for samples to be sent away to analytical laboratories for testing. This may give accurate results, but it is a time-consuming process that can become quite impractical for routine screening.3 At the other end of the scale, environmental soil and soil runoff samples are rarely tested at all.4

As a result, several research groups have now begun to develop advanced pesticide screening systems that can easily be deployed in the field. Such systems can enable the rapid and affordable testing of environmental samples without the need for reliance on external laboratories.

When pesticides are sprayed over a crop, a large amount will fall on the soil. Rainwater can begin to wash this pesticide residue through the soil until it contaminates the soil runoff and groundwater beneath agricultural land.5 When this contaminated water finds its way into streams and other bodies of water, this can spell disaster for the local ecosystem.

Exposure to pesticides is also a problem for the workers who routinely deal with these pesticides or with contaminated farmland.

“Long-term exposure to really low-level occurring pesticides is problematic,” said Shalini Prasad, PhD, a professor in the Department of Bioengineering and Biomedical Engineering at The University of Texas at Dallas.

“Low dose exposure can trigger health effects that will not be felt immediately, and these include anything from your gut microbes, to having migraines, asthma or other kinds of immune-related outcomes.”

Prasad recently led research into creating a new electrochemical sensor that can be used for the rapid detection of polar and nonpolar pesticide compounds in soil runoff.4

A standard electrochemical sensor measures changes in the electrical potential seen when a target analyte binds to an antibody layer that is deposited on the sensor surface. But as Prasad explains, many pesticides do not have any charge associated with them, and so some kind of redox mediator workup is needed to amplify this subtle charge change signal.

“Here, we decided we would not do that, but we would actually go and look at the capacitive changes of the system,” Prasad explained. “[We] are looking at impedance change in each of these measurements. Now, these are small, however, the relative changes associated with them are measurable by handheld portable electronics.”

“The idea here is, if I can put polar and nonpolar pesticides together, then I'm not dictated by what standard electrochemistry does to me, where I have to have charge in my system to measure something,” Prasad added.

After being dipped into a soil runoff sample, the prototype sensing device produced by the Prasad group was able to detect the presence of both the polar pesticide glyphosate and nonpolar atrazine using the same setup, down to the parts-per-trillion level for atrazine and parts-per-billion in the case of glyphosate. Using a machine learning classifier integration, the sensor was also able to label certain signals as indicating “low”, “medium”, or “high” levels of pesticide in real soil runoff samples.

With further development and collaboration through public–private partnerships, the research team hopes to create a finished device that can be deployed as a first line of defense in screening and solving pesticide-related soil pollution.

“Investing a little into such noninvasive screening technologies can truly go a long way to build consumer confidence,” Prasad said. “The intent here is not to police, but to actually collaborate. And also to educate.” 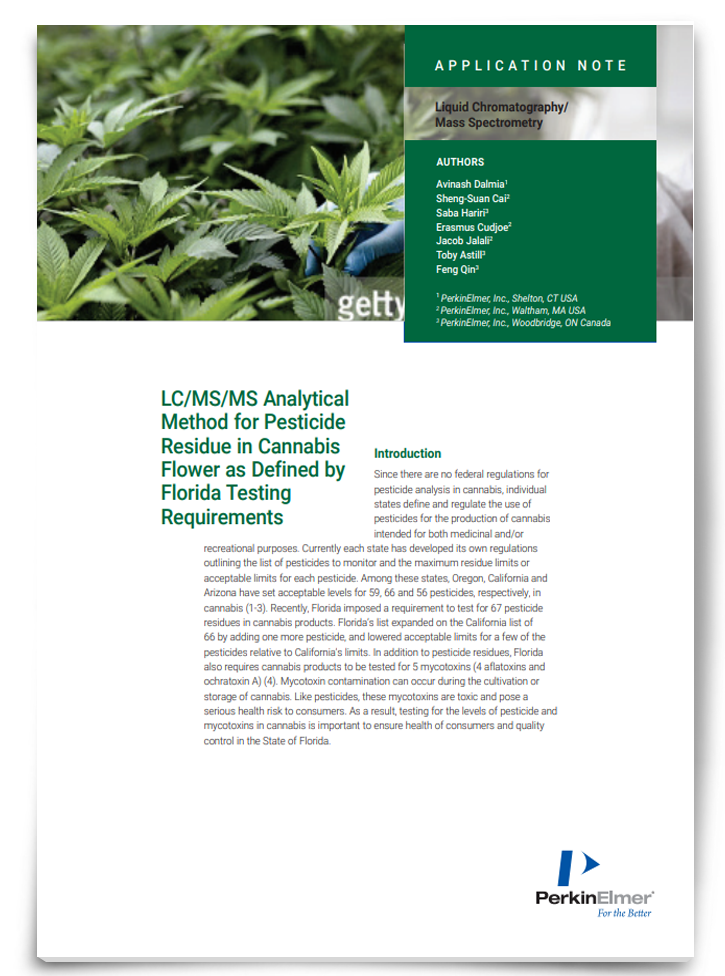 Recently, Florida imposed a requirement to test for 67 pesticide residues and 5 mycotoxins in cannabis products. Download this app note to discover an LC/MS/MS methodology that is ideal for simultaneous analysis of pesticide and mycotoxin residue in cannabis, fulfills Florida’s strict LOD and LOQ requirements and minimizes matrix interference.

Electrochemical devices are not the only way to detect the presence of pesticide residues rapidly.

Lateral flow assays (LFAs) are a fast and low-cost solution for detecting the presence of a given analyte, with the COVID-19 pandemic boosting the profile of LFAs as an effective point-of-care testing method.3

“This detection system was launched in the 1980s for pregnancy testing. It has now expanded to the detection of many markers of clinical, biological and environmental importance,” said Jairo Pinto de Oliveira, PhD, a professor of biochemistry at the Universidade Federal do Espírito Santo. “Its main advantages are simplicity, low cost and detection with the naked eye, free of equipment or laboratories.”

In a recent review,3 a team led by de Oliveira evaluated the recent development of LFAs for the detection of pesticides in the field.

The conjugate pad releases a labeled detector reagent, usually some type of antibody, into the sample as it flows through the pad. These labeled “recognition molecule” antibodies will only bind to the specific target analyte, and this is what is detected at the “test line” in the detection zone. A second control line is also present in the detection zone, which contains a control antibody that can bind to either the analyte or the other antibody detection agent. This control line can be used to check that the LFA is still functional, and that the test has not been degraded by poor storage or improper use.6

“Although LFAs based on electrochemical assays are more sensitive, standard LFA [results] can be detected with the naked eye,” de Oliveira explained. “They are excellent for field application and for use by untrained personnel.”

Such LFA kits have already been used in pesticide detection,7 although they are not necessarily commonplace. According to their review, de Oliveira and colleagues found that problems such as poor reproducibility and sensitivity to high analyte concentrations were frequently reported by researchers using LFAs. There were also questions raised over the safe disposal of some LFA detection kits, as some devices may contain fluorescent labels or heavy metals that may cause harm to the environment if used on a large scale.

“Another necessary advance is the need for multiplex devices to evaluate multiple pesticides per matrix,” de Oliviera said. “There are already some proposals in this sense. However, they are still very limited, mainly due to the different chemical characteristics of pesticides in the same matrix.”

Nevertheless, LFA technology can still be a useful detection tool for operating in the field, the researchers concluded. Future advancements in multi-residue analysis and in simplifying sample preparation will ensure that LFA-based technologies come to be a reliable, robust and sensitive method for pesticide screening in the near future.

LFAs are not the only simple, visual method for pesticide screening. Recently, researchers from the University of Missouri demonstrated that molecular imprinted polymer (MIP) films could be used to detect the presence of chlorantraniliprole (CHL) pesticide residue on tomato crops.8

The color change in the MIP film sensor could not be detected with the human eye, but could be picked up reliably with a spectrometer down to CHL levels of around half a microgram per liter.

While still in the early stages of development, the researchers believe that this proof-of-concept study could lead to the creation of more cheap, commercial pesticide testing solutions for farmers. Instead of needing to take samples and post them off to analysis labs, all that would be necessary for efficient testing would be a portable sensor and a compact reading unit.

As Professor Prasad points out, such accessible testing technologies are not intended to be a new way of policing farmers, but rather a proactive step that farmers can take to protect their land from excess pesticide contamination and improve consumer confidence. As a knock-on effect, this can help to protect the health of workers and the natural ecosystem. Rapid testing can also simultaneously function as an early warning signal for farms that may be approaching relevant statutory safety limits, ensuring that actions can be taken before true dangers start to present themselves.

Alexander Beadle
More from this author >
Advertisement
Chosen for You
Infographic