Complete the form below and we will email you a PDF version of "ASMS 2017: Powerful Tools for Food Safety, Toxicology, and Forensics"

Instrument and software introductions for applications outside of healthcare were prevalent at this year’s ASMS meeting, held June 4-8 in Indianapolis. The evolution of complete workflow offerings and simplified interfaces for non-expert users is particularly important for individuals working in food, forensic, and environmental applications.  In these markets, the emphasis is also on time to results and the quality and accuracy of data.

“[These customers] are molecular biologics, chemists, food scientists,” says Jean-Paul Mangeolle, president at Sciex. “They are not expecting us to just come up with an instrument. They have an expectation that we make the instrument easier to use and with user-friendly software.” Sciex’s SWATH  data independent acquisition technique for detection and quantitation of virtually every detectable compound in a sample, was, until recently, only available for proteomics. The company announced at ASMS that it was expanding the data-independent acquisition (DIA) technology into new application areas.

In food applications, SWATH allows scientists to completely survey samples for every detectable chemical contaminant present. Unlike traditional LC-MS/MS, SWATH reliably detects low-abundance compounds in difficult matrices.  “It's a big advantage to a food scientist if you are able to identify in a sample any type of pesticides you have, not just the one you are looking for,” Mageolle says.  In environmental testing, SWATH coupled with X500R collects ultra-high quality MS and MS/MS on all detectable peaks in water quality samples, where there are hundreds of contaminants, some in the low nanograms per liter range.  In forensic analysis, it collects comprehensive MS data and MS/MS data from a single sample when screening and quantitating drugs and medication. With a digital archive of the forensic evidence, samples can be re-interrogated without physical re-analysis.

No time? No lab? No problem with the easy to use FLIR GRIFFIN™ G510 Portable GC/MS. 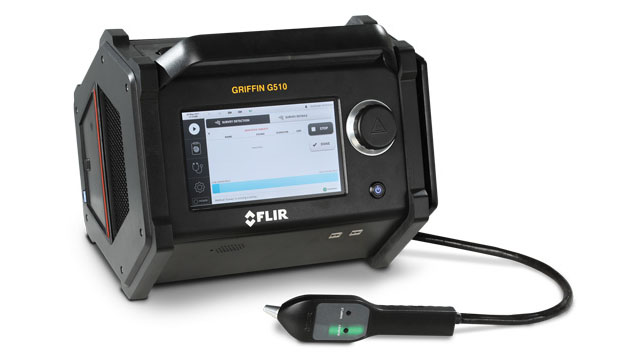 "The Griffin G510 is designed from the ground up to operate outside the lab and deliver real-time chemical identification to those who need it most." Philip Tackett, Ph.D., GC/MS Product Manager, FLIR Detection

Waters and IonSense announced at ASMS that they are linking Waters’ ACQUITY QDa Mass Detector with the IonSense DART ionization source, with forensics one of several potential applications. The DART is an open air ionization source for rapid, noncontact surface sampling of compounds with minimal sample prep requirements. The method permits detection of pharmaceuticals and their metabolites, synthetic organic molecules, organometallics, explosives and toxins on a wide variety of surfaces including concrete, asphalt, human skin, currency, paper stock, vegetables, fruit, and even clothing.

Shimadzu and Phytronix signed an agreement to offer the industry’s first triple ion source instrument, aimed at improving productivity in high-throughput labs performing toxicology, drug discovery and food safety. Incorporating Phytronix’s LDTD (Laser Diode Thermal Desorption Ion Source), the system is designed to sync with the speed of the Shimadzu LCMS-8060 triple quadrupole mass spectrometer.  “This unique approach consisting of three modes of ionization allows clients to rapidly switch between Liquid Chromatograph and LDTD technologies without moving or disconnecting any component of the mass spectrometer. With a simple click, the scientist can select the best way to develop, produce, screen and confirm their analysis, says Jean Lacoursière, President of Phytronix Technologies.

ASMS also saw notable software introductions in food and forensics. Bruker released ToxTyper 2.0E for high-throughput toxicology for applied toxicology and forensics. The platform is helping Miami authorities grapple with a flood of new illegal drugs, such as synthetic cathinones and fentanyls.

Waters introduced LiveID Software for direct-from-sample measurement and classification of food products by its QTof MS to help detect food fraud, a growing area of concern following incidents such as the Chinese melamine scandal in 2008. LiveID takes spectra acquired from a test sample and performs recognition to classify it as belonging to one of a number of user-defined sample types or groupings. “Information on food samples separated in time and space from where it is needed most isn’t efficient and hurts productivity. We’ve designed LiveID Software to make the process of getting real-time information about samples as intuitive, as quick and as easy as possible,” says Ronan O’Malley, Senior Director of Informatics Products, Waters Corporation. Mass spec is faster than other analytical methods to investigate food fraud, namely immunosassay and PCR.

No Bench? No problem!

While MS continues to be the gold standard for chemical analysis within the laboratory, FLIR is moving way off the bench and into the field. The company launched the Griffin G510 GC/MS—its first person-portable chemical identifier—at this year’s ASMS. The system  enables military and civil responders to easily sample all phases of matter, including solid, liquid, and vapor, to rapidly identify chemical hazards in the field. “It has been our mission to take the capability of GC/MS and make it accessible to a wider range of operator,” says Phillip Tackett, PhD, product manager at FLIR. Designed for use at the “site of action,” such as accidental spills, environmental monitoring, or law enforcement scenarios such as illegal laboratories, the Griffin G510 GC/MS  can analyze all phases of matter in the field—with zero sample prep in the case of vapor and solids and minimal sample prep for liquids via a split/splitless injector. The machine can quickly identify and confirm chemical hazards using the standard NIST database. “This is important because the product is likely to be used in scenarios that are true unknowns,” Dr. Tackett says. It is also easy to use while in a “hot zone” while in personal protective equipment.

Most importantly, any responder can use the system, Dr. Tackett says. The interface is designed to limit the number of options that are required for operators to wade through, and data interpretation occurs automatically. “We want to eliminate that step for responders who may not have a background in chemistry,” he says, adding that it take a responder about 2 hours to train on the system.