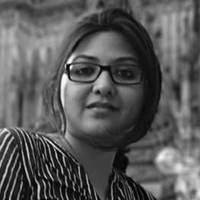 Owing to the production of vast quantities of plastics worldwide, their relative short-span uses and some undiscerning waste-disposal practices, there has been an enormous deposition of plastic waste in the aquatic environment. In water, these plastic wastes undergo partial degradation as a result of which larger plastic pieces are broken down into smaller fragments. Fragments under 5 mm are known as microplastics (MPs).

Microplastics are introduced into the environment in various ways during manufacture, use and afterwards in disposal. But, besides being broken down from larger plastics, they may be manufactured in micro size, for example, for cosmetics, textiles and industrial products. In the cosmetic industry, microbeads, which are extremely tiny pieces of polyethylene plastic, are added to a wide range of health and beauty products such as exfoliates and toothpaste. These tiny plastic particles easily seep through water filtration systems and ultimately reach the ocean, causing harm to aquatic life. Researchers have reported the presence of MPs in many marine and freshwater species. Studies have found MPs in the gastrointestinal tracts of fish and a recent study reported the presence of MPs in other marine species including sea turtles, whales and crabs.

An overview of microplastics research

“Microplastics are ubiquitous,” explained Fay Couceiro, senior research fellow in Biogeochemistry and Environmental Pollution in the School of Civil Engineering and Surveying at the University of Portsmouth. Couceiro’s work is focused on defining the sources and fates of contaminants – such as microplastics – in the environment and developing interventions to prevent or mitigate their impact. Microplastics are present in different forms around us, such as in the air, soil and even in the food that we consume. In the marine environment, aquatic fauna may accidentally ingest the MPs, which can resemble fine fibers, small pellets or beads, consequently introducing them into the food chain. There may be a number of factors contributing to rising MP levels, such as “break away from larger plastics during wear and tear or from incomplete breakdown by UV light and microorganisms,” said Couceiro.

Even though several studies have indicated the negative impact of MPs on the ecosystem and human health, there is a major research gap regarding the understanding and differentiation of different types of microplastics. Therefore, more research is needed to bridge this gap. As noted by Couceiro: “The study of the different types of plastic is important because it is linked with the production of microplastics. As an example, MPs synthesized from polyurethane can take part in biogeochemical cycling, while MPs from polyvinyl chloride (PVC) inhibit microbial degradation. Despite this, they are all grouped under the title microplastics.”

The majority of the research on MPs is associated with the marine environment. Many of these studies investigate the impact of a single type of MP at a given time, which is not necessarily representative of the real-world aquatic system scenario. Couceiro stated, “Once any material is placed in the environment it becomes colonized by biological material and can adsorb chemicals.” Previous research has also shown the impact of the plastisphere (the microbial biofilm community on microplastics) on the marine ecosystem. Thereby, to understand the impact of MPs on the ecosystem, “one has to consider different aspects, such as the type of plastic polymer, size, shape, concentration of particles, exposure time, chemical adsorbents and plastisphere to determine the consequences of the accumulation of microplastics”, continued Couceiro.

Identification of Microplastics by FTIR and Raman Spectroscopy 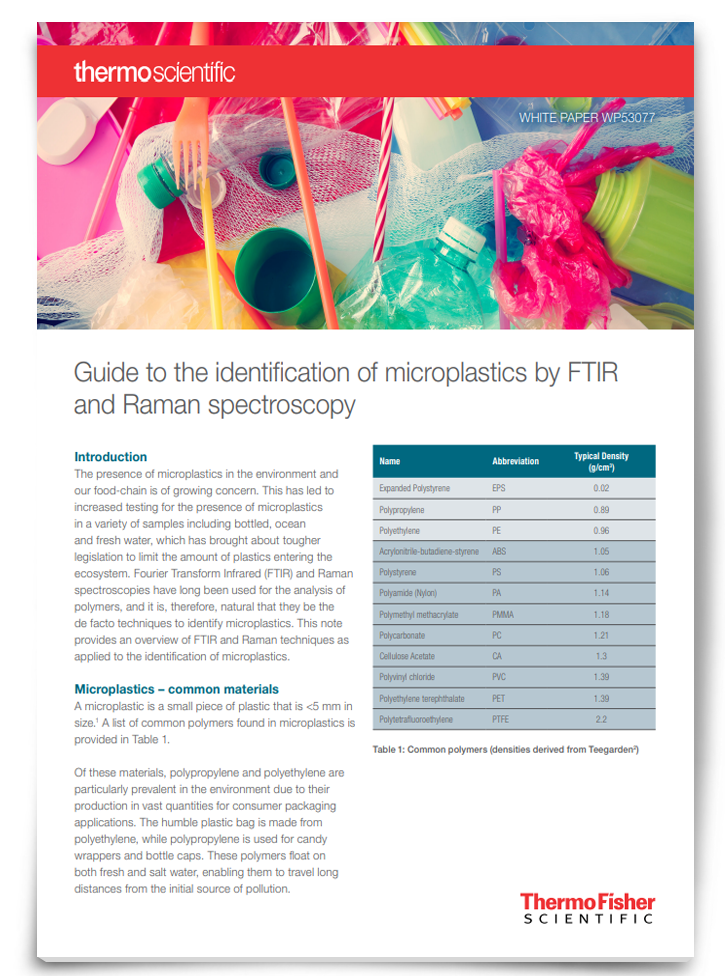 Fourier transform infrared (FTIR) and Raman spectroscopies are complementary techniques, that have long been used for the analysis of polymers. Therefore, it comes as no surprise that they are also exploited to identify microplastics. This whitepaper provides an overview of how these powerful analytical tools can be used to identify microplastics. Download this whitepaper to learn more about the analysis of varied particle sizes, sampling techniques and automation options for infrared microscopy.

In a review article on the methods of MP detection from water and sediment samples, it was estimated that 50% of researchers use Fourier-transform infrared spectroscopy (FT-IR)-based methods, 32.5% visual inspection and 10% Raman spectroscopy for the detection of MPs. The remaining researchers used techniques including electron microscopy (EM) and gas chromatography-mass spectrometry (GC-MS).

Visual inspection using a microscope or stereoscope can help to classify plastics based on their physical characteristics. Although this is one of the most used methods, it is an extremely time-consuming approach, is subjective and dependent on the experience and skill of the person analyzing the sample. Researchers can use staining dyes such as Oil Red EGN, Hostasol Yellow 3G, Eosin B and Rose Bengal to aid visual inspection of MPs. One of the drawbacks of this method is the differential affinity of the dyes for different plastics. However, researchers proclaimed that Nile Red, a solvatochromic dye, is the most promising staining dye for MPs because it offers short-term incubation, a high recovery rate and also permits vibrational spectroscopy for further analysis.

Different methods, based on the size of the plastic particles, are used for the chemical characterization of MPs. Both vibrational spectroscopy methods, i.e., FT-IR and Raman spectroscopy, are non-destructive and highly accurate. Many FT-IR methods, such as attenuated total reflection FT-IR (ATR-FTIR), produce an infrared spectrum by analyzing the change in dipole moment. Raman spectroscopy provides a molecular fingerprint spectrum based on the polarizability of chemical bonds. Another method of MP detection is pyrolysis-GC-MS (pyro-GC-MS). This technique involves thermal decomposition of MPs under inert conditions. The gas formed is separated in the chromatographic column and identified by MS. However, this process is destructive and does not provide any information regarding the shape of the MPs. Liquid chromatography (LC) is also used for the characterization of MPs but requires large amounts of samples. To study the elemental composition of a polymer, researchers can use a portable X-ray fluorescence (XRF) spectrometer. Scanning electron microscopy (SEM) with an energy-dispersive X-ray microanalyzer can help to understand the morphology and chemical composition of MPs too.

Even though numerous methods are available for the detection and analysis of MPs, there is a lack of standardization. In a bid to address this issue, researchers have recently standardized the sample preparation method for FT-IR-based analysis to identify MPs, in the sub-100 µm size range, from sludge and wastewater. This method uses sequential digestion with Fenton reagent to remove organic components and has proved to be quick and cost-effective.

Other researchers are working independently to develop effective methods for the identification of MPs. Benjamin Asamoah, a researcher at the University of Eastern Finland, is an expert in the detection of MPs using photonics-based techniques. He said, “Typically, samples (soils, water, marine creatures, etc.) are collected and are chemically processed for the identification of MPs using various traditional methods such as Raman techniques, infra-red spectroscopy, FT-IR and hyperspectral imaging.” Recently, however, researchers have reported that photoluminescence spectroscopy using a 405 nm laser diode for sample excitation can accurately detect MPs. Asamoah added, “Photonics-based techniques are extremely promising for in situ microplastic detection and identification. Artificial intelligence-based methods may even further advance our fight against microplastics.” However, researchers still face challenges in different stages of MP identification.

Analysis of Microplastics in Suspended Solids With TG-GC/MS 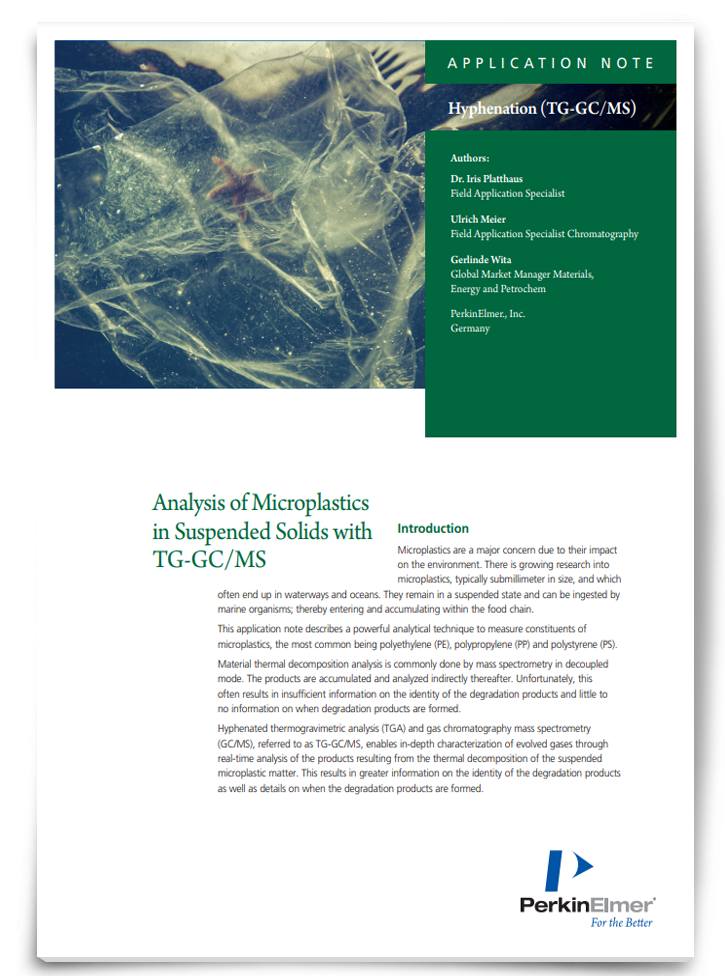 Microplastics often end up in waterways and oceans and remain in a suspended state, so can be ingested by marine organisms; thereby entering and accumulating within the food chain. Material thermal decomposition analysis is commonly done by mass spectrometry in decoupled mode. The products are accumulated and analyzed indirectly thereafter. Unfortunately, this often results in insufficient information on the identity of the degradation products. Download this app note to learn about a technique that can provide greater detail and higher-resolution results.

Challenges in the detection of microplastics

According to Asamoah, “The reliability of some of the methods decreases with modification of the microplastics due to their aging and interaction with the environment”. Therefore, a single method for the detection of MPs is not applicable for all in situ experiments.

Typically, the chemical detection of MPs involves four steps, (a) filtration or sieving, (b) digestion, (c) density separation and (d) spectrometric analysis, with challenges at every stage. Couceiro highlighted some of the challenges as follows:

Filtering at different sizes: Researchers find it difficult to compare data across different studies, owing to the differences in the size of the filter used. As an example, studies which used filters of 25 µm obtained more microplastics than those that used filters of 100 µm, meaning a fair comparison is not possible across these two studies.

Digestion: This step is often required to remove organic matter. However, it can also have unwanted impacts on plastics in the sample that affect their spectral signatures, making them more difficult to identify. Even though some of the digestion processes, such as enzyme-based digestion, do not hinder the MP’s spectral signatures, this technique is slow and not cost-effective.

Using different densities for separation: MPs can be separated on the basis of their differing densities. This phase is extremely challenging because different separating conditions have their own sets of drawbacks. For example, although separating MPs at 1.2 g/cm3 is relatively easy, it misses the heavier polymers. On the other hand, separating MPs at 1.7 g/cm3 retains more polymers but also preserves cellulose which can interfere with later analyses.

Spectral analysis: FT-IR is the main form of spectral analysis of MPs, but, while extremely useful, it has certain limitations. For example, it cannot detect MPs under 10 µm. However, greater plastic particle toxicity has been demonstrated in MPs under 10 µm which will be missed by this technique. Another limitation is its inability to determine the size and shape of MPs accurately. Both these characteristics are extremely important in determining the toxicological impacts of the MP. Although Raman spectroscopy could be used to characterize MPs down to 1 µm, it is extremely sensitive to interference from other chemicals lingering from earlier processes, i.e., density separation and digestion.

This article highlights the adverse impact of MPs on our environment, but their presence in the food chain means they can be harmful to humans as well as marine animals. Scientists face challenges in every step of MP detection and the erstwhile lack of standardized methods have made MP research more difficult. However, as optimized and standardized methods become available, this could help to make rapid progress in MP research.
Related Topics
Lab of the Future
Electron Microscopy
Gas Chromatography
GC-MS
Microplastics
Water Analysis
Artificial Intelligence and Machine Learning
Liquid Chromatography
Mass Spectrometry
Meet the Author

Priyom Bose, PhD
More from this author >
Advertisement
Chosen for You
Industry Insight