Complete the form below and we will email you a PDF version of "Speaking Algae: Tapping the Ancient Power of Microalgae Using Synthetic Biology"

Complete the form below to unlock access to this Audio Article: "Speaking Algae: Tapping the Ancient Power of Microalgae Using Synthetic Biology"

Albert Einstein famously said, “the only source of knowledge is experience.”

What if we take this principle to an extreme—say, millions or even billions of years of experience living on Earth? What knowledge might be available?

We don’t need to guess. We can look to microalgae, some of the oldest and “most experienced” organisms on our planet.

But, this begs the question, how do humans tap into microalgae’s “life experience” to acquire valuable knowledge? To do so, we must learn to speak their “language” and translate that information into useful applications for society and its industries. Amazingly, recent strides in microalgae biotechnology, synthetic biology, and biomanufacturing are making that possible.

Microalgae: A LONG resume of success

During their time on the planet, microalgae have been busy. Given hundreds of millions of years of experimentation, microalgae evolved the genetic and biochemical skill sets needed to survive and colonize nearly every type of ecosystem on Earth, including some of the most inhospitable,1 like the highly saline environment of the Dead Sea.2

The continuous evolution needed to master the planet’s many ecosystems drove the creation of an impressive diversity of microalgae species, with conservative estimates landing around 70,0003 species  and others reaching 200,000 to several million.1,4  Through natural selection, each species became fine-tuned to their specific light conditions and available resources. Each species also ultimately developed unique natural product profiles and metabolic characteristics, turning light and CO2 into specific organic materials needed for their survival.

While microalgae have been used in food and nutrition worldwide for centuries,5 it wasn’t until the middle of the 20th century that scientists began exploring the application of microalgae in biotechnology.  Researchers realized that microalgae could be used as a sustainable, photosynthesis-powered expression chassis.

The first successful example occurred in the 1980s when commercial groups cultured Dunaliella salina to produce β-carotene,6 a nutraceutical supplement that the body converts to vitamin A. We now know that microalgae species can produce a variety of high-value materials, like pigments, flavors, fragrances, growth factors, fatty acids, antioxidants, oligosaccharides, proteins, terpenes, amino acids, peptides, and many more materials desired by key industries. Until recently, the vast majority of algae biotechnology attention and funding focused on biofuel production, with limited commercial success.7

By the 2000s and early 2010s, biofuel researchers were captivated by microalgae’s ability to produce biomass enriched with a diverse collection of high energy molecules, such as long chain polyunsaturated fatty acids.8

Furthermore, microalgae cultivated in large-scale, open-air pond systems were prone to contamination and inconsistent production. Unfortunately, more tightly-controlled production processes using photo-bioreactors were also not viable at that time, particularly when it came to their light source.9

While microalgae biofuels still have potential, these challenges indicate that it is time to consider microalgae as an expression chassis for a wider range of materials, particularly those required at smaller scales than biofuels. Propelled by findings from biofuel research, organizations are now realizing the rich opportunities of using microalgae to produce high value low volume products.10 Discoveries of commercial relevance will grow exponentially as more microalgae species are characterized, since only a small number (~15) are grown at meaningful commercial scales today.

Unlocking microalgae species in the new age of synthetic biology

In just the past few years, advanced synthetic biology approaches have made the discovery and mapping of microalgae species and their industry- and molecule-specific potential much more efficient and purpose-driven.11 In addition to improved recombinant gene transfer and genome editing techniques,12  the exponential growth of artificial intelligence (AI) and machine learning have made large dataset management and analysis much faster and less labor-intensive.13 In turn, this enables better metabolic profile modeling, providing more accurate predictions of each species’ ability to produce a specific material. Now, individuals seeking biomanufactured alternatives to specific chemically synthesized materials can more readily seek out a species naturally primed to produce it or a related precursor.

These advancements have also enabled better characterization of these species and their specific cultivation requirements. Thus, researchers can more quickly identify the optimal conditions that enable specific microalgae to grow rapidly and produce their target molecules.

Manufacturing at scale: Lighting the way with end-to-end algae tools 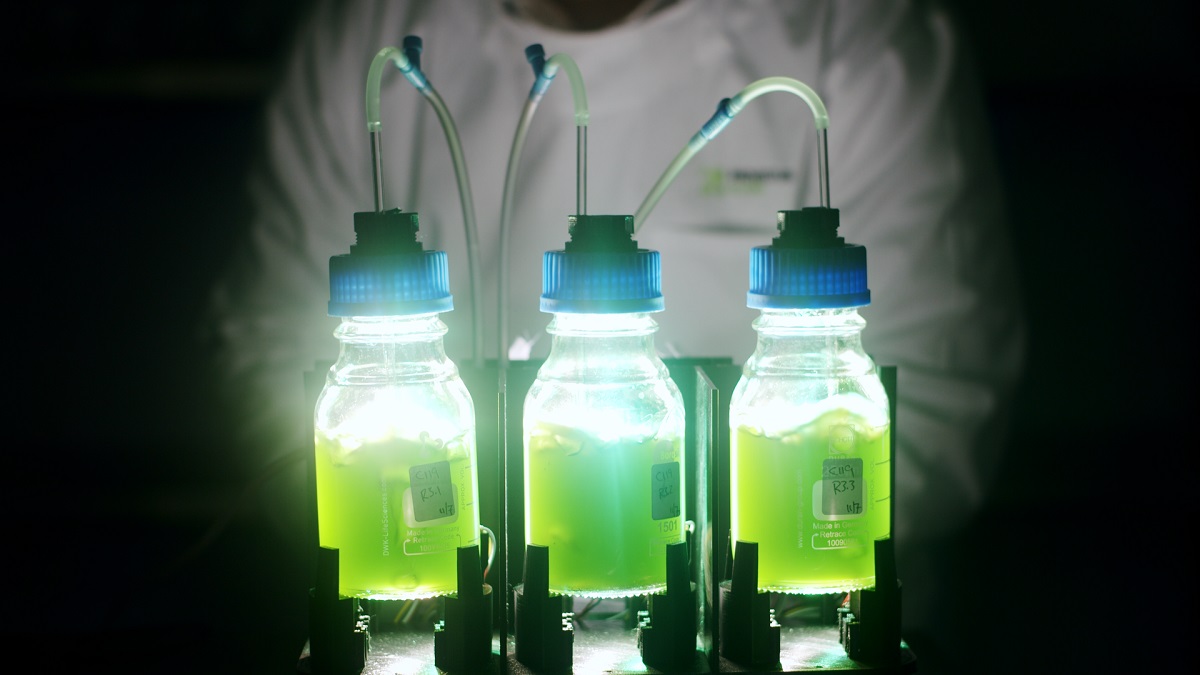 Most importantly, the past decade of algae research has cemented that light conditions massively impact algae growth, gene expression, and biomaterial production on a species-specific basis. Light is the primary medium by which microalgae interact with their environment. So, to tap into the natural diversity of microalgae, we must speak algae using light as our language.

All microalgae maintain intricate light-sensing systems, made up of a network of photoreceptors and associated signaling pathways.14 These photoreceptors control different biological functions and regulate specific gene expression to help algae respond to changing environmental conditions. Having evolved in very different ecosystems, these photosystems vary significantly between species, as do their photoreceptors and the in vivo functions they control.15 Thus, biomanufacturers must understand how this complex network of photoreceptors functions for each species. With the ability to carefully tune photosynthesis, biomanufacturers can control microalgae growth, development, and biomaterial expression to suit their needs. Importantly, AI and synthetic biology approaches also help researchers determine and augment both ideal light conditions as well as conditions that impact the production of valuable organic materials and recombinant gene expression across species.

To make use of algae's special relationship with light, biomanufacturers needed photo-bioreactors capable of providing high-intensity light across a variety of specific wavelengths and illumination periods. Up until a few years ago, this was virtually impossible at commercial scales. However, recent advances in LED technology now enable more advanced photo-bioreactor approaches,16 solving their past challenges. While once restricted to specific wavelengths, LEDs can now produce light across a much wider spectrum.17 Additionally, LEDs are now also much more efficient, smaller, and cheaper,18 which drastically increases their commercial viability in bioreactors. Together, these LED advancements make it possible to construct ideal light conditions for specific algae species without limitations regarding photo-bioreactor design and operation expenses.

While improved lighting is the most important technological advancement, sufficiently protecting the fragile structures of microalgae remained another persistent scale-up challenge.19 New bioreactor approaches and culture strategies have also helped to increase microalgae stability during biomanufacturing. Furthermore, the advancement of computational fluid dynamics has increased our ability to predict and understand light penetration in water, gas transfer efficiency, and fluid flow to better protect fragile algae species which historically have been difficult to grow.20 In combination with LED advancements, this means commercially viable photo-bioreactors are now possible and available, opening up greater scale opportunities.

The massive untapped diversity of microalgae species represents an outstanding opportunity to produce important materials by building on evolutionary experience. Though relatively few microalgae species have been fully explored and characterized, several efforts are underway to bring more species online. Having a greater understanding of these species is already yielding dividends, especially when paired with end-to-end biomanufacturing approaches.

The microalgae biotechnology community has learned from the challenges of the past and is now ready to make microalgae bioproduction commonplace across many industries, including pharma, biopharma, animal health, agriculture, food and beverage, energy, and beyond. Despite having only a measly 200,000 years under our belt, human experience has its merits too. With this cumulative knowledge, the future of microalgae is at least LED-bright.