Complete the form below and we will email you a PDF version of "Sustainable Food Science: Converting Food Waste Into Useful Products"

Dr Haibo Huang is a food waste expert. As an assistant professor in the Food Science and Technology department at Virginia Tech, Huang’s research focuses on finding ways to convert and reuse food waste and other food processing byproducts into valuable products such as food and animal feed ingredients, biofuels, and even functional materials for use in batteries. 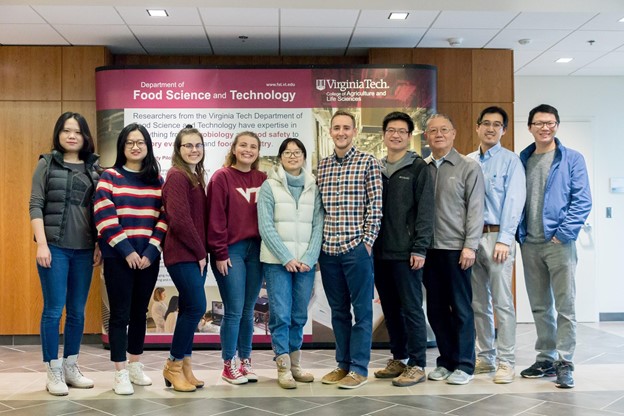 Taking materials that would be otherwise discarded and turning them into something useful is a strong example of sustainability and is extremely important for an industry that produces an enormous amount of waste. In the United States, the amount of food wasted is estimated to be between 30-40% of the food supply, or roughly 220 pounds of food waste per person each year. Huang’s research ultimately seeks to lower these numbers and prevent the needless loss of resources. Turning food waste into any kind of valuable product prevents leftovers from being discarded in landfill, but Huang is interested in further focusing on the backend of this chain and is actively looking for ways to produce products from food waste that could in turn solve issues in other areas.

Huang’s mission led him to the Virginia Tech Water INTERface Interdisciplinary Graduate Education Program (IGEP). The Water INTERface IGEP strives to promote clean and healthy water for the benefit of human health. He discovered opportunities to integrate his lab group’s research on food waste utilization with the water quality expertise from the Civil and Environmental Engineering group in the IGEP to create products that could improve water quality. Two of his PhD students, Qing Jin and Yanhong He, seized this opportunity to undertake interdisciplinary work that blends together food waste utilization and water quality enhancement.

The wine industry is expanding rapidly in Virginia which means there is a similarly growing amount of waste being created by the local wine industry. The leftover material from the winemaking process is called grape pomace — the solid residue left behind by grapes after they have been used to produce wine. In previous work, Jin had converted grape pomace into several valuable products including grape seed oil, polyphenols, and biofuel. However, even after producing three valuable materials from the grape pomace, around 50% of the solid residue remained as secondary waste. Jin wanted to find a way to use the entirety of the pomace so that there was no remaining waste to discard.

To aid her in this quest, Jin reached out to Dr Jason He, then a professor in the Civil and Environmental Engineering department at Virginia Tech and member of the Water INTERface IGEP. Together they devised a plan to use the leftover grape pomace waste material to produce biochar.

Biochar is a charcoal-like byproduct that is produced by a process called pyrolysis, which is the heating of organic materials in the absence of oxygen. Biochar can adsorb contaminants in water and Dr He helped to guide Jin through the necessary steps to test the efficiency of different biochars for adsorbing lead (Pb). There are many contaminants that may be found in drinking water, but lead is especially common and can cause a range of negative health effects when consumed in high amounts. Different biochar samples were produced by applying several different treatments to grape pomace material followed by pyrolysis at different temperatures. Jin identified the best processing conditions of pomace treatment and pyrolysis temperature. The resulting biochar showed greater than 90% lead removal efficiency from water with lead concentrations typical of those found in drinking water supplies with lead contamination.

This graphic shows a simple illustration of the flow of materials in the grape pomace conversion process. Credit: Qing Jin.

With Jin’s biochar coupled to previous efforts to recover grape seed oil, biofuels, and polyphenols, Huang’s group found sustainable uses for the entirety of waste produced from the wine making process. As a final step, Jin performed a techno-economic analysis to evaluate the economic performance of this process. Results showed that the internal rate of return for producing grape seed oil, polyphenols, and biochar was 34% with a payback time of 2.5 years, indicating the process would not only reduce wine-making waste, but also be profitable. The hope is that this process of grape pomace conversion into grape seed oil, polyphenols, and biochar will be scaled up and act as a role-model for upgrading other agro-industrial waste streams that provides a boost to local economies.

Similar to the wine industry, craft beer brewing is growing rapidly in the United States. Yanhong He, another of Huang’s graduate students, conceived a project that converts waste from breweries into value added products. Specifically, she targeted reusing spent grain from the beer-making process as a protein ingredient to replace fishmeal in farmed shrimp diet. The fishmeal alternative needed to be high in protein, so He separated the spent grain into a protein-rich and a fiber-rich product. Fishmeal is a major aquafeed protein source, but its supply has become limited in recent years. He’s work provides an alternative protein source for the aquaculture industry while creating a new way for the brewing industry to manage its waste materials. However, she still needed to find a use for the left-over fiber-rich product.

One day, He was talking with her family and they mentioned that the water coming from their well was an odd color. After doing some research, she suspected that the funky color was caused by high levels of dissolved metals in her family’s water. This turned her attention to Jin’s research which had converted wine industry waste into a remover of water contaminants.

He reached out to Dr Andrea Dietrich, co-director of the Water INTERface Interdisciplinary Graduate Education Program (IGEP) and professor in the department of Civil and Environmental Engineering, to assess the possibilities of using the left over fiber-rich product from the spent grain to enhance water quality. He’s idea is to convert the fibrous material into nanocellulose sponges that can adsorb unwanted metal contaminants in water, like manganese and lead. As mentioned above, water with high lead content can be harmful to human health. Water with high manganese content may result in unsightly colors and particles in water and be undesirable for human consumption. Consuming water with high manganese content over long periods of time may cause loss of attention, memory, and motor skills. 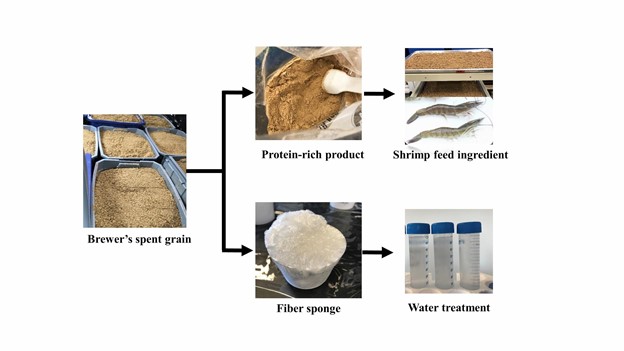 The products and uses derived from spent grain through He’s experiments. Credit: Yanhong He

The experiments are still underway, but early results are promising and show that the nanocellulose sponges are removing metal contaminants from drinking water. The next steps are to optimize the characteristics of the nanocellulose sponges, followed by quantifying metal removal from water. He’s work is again demonstrative of sustainability and creative thinking that helps solve two problems simultaneously by reducing waste and improving water quality. She is eager to continue tackling such challenges in the future. “Sustainability is a big, important topic nowadays, and the field is full of challenges and opportunities, so I think it’s the right way to go for me as a researcher,” she said.

The power of interdisciplinary research

Huang is extremely pleased with the two projects taken on by his students and recognizes the benefits of being involved with the Water INTERface IGEP. “In the Food Science department, we rarely care about water — maybe drinking water — but never waste water or other issues, so it's a good opportunity for my students to step into another area to open their eyes and their vision,” he said.

These types of projects would not be possible without interdisciplinary research. By combining ideas and skills from multiple areas, both He’s and Jin’s research are bridging solutions to solve problems that are often viewed as completely separate.

Interdisciplinary research has many known benefits and is expected to continue growing in popularity in the future. Dietrich is excited by these prospects. “Thinking across boundaries guides solutions that are untethered to the conventional ways of approaching problems and are thus ripe to produce unique outcomes,” she said.

Beyond fostering more impactful research, the IGEP enhances student learning. Jin attributed this to an exposure to the varying knowledge and ways of thinking that are present in different university departments. “If I hadn’t joined the IGEP, I would not have had the opportunity to learn from professors and students outside my own area of expertise. It has been very important for me as a researcher to learn different things from different people.”

By participating in the Water INTERface IGEP, both Jin and He have grown as researchers and will be able to carry their expanded knowledge and skill sets with them as they forge ahead in their future studies and careers. This is true for the many other students involved in the Water INTERface IGEP, other IGEPs at Virginia Tech, and the countless interdisciplinary studies and research programs available around the world. As the world continues to broaden, so too should our perspectives. Interdisciplinary programs allow for this growth and will continue to be an important part of science in the future.