Improved access to clean and safe drinking water is a key part of the United Nation's Millennium Development Goals for environmental sustainability1 and in 2010 available drinking water was officially classified as a human right2. Huge strides have been made in improving access, but there still remains a clear geographic and socio-economic divide, as illustrated in Figure 1. Figure 1: Percentage of people using a water source that is unprotected for contamination (WHO/UNICEF Joint Monitoring Programme for Water Supply, Sanitation and Hygiene3).

Of the 10% of the world’s population who do not have access to clean drinking water4, almost half of those live in sub-Saharan Africa, with developing countries predominating in the remainder.

Even within developed countries, there are pockets where financial austerity can affect access to clean drinking water, such as Flint, Michigan, in the United States. Flint has been experiencing a drinking water crisis since early 2014 when lead, which can cause developmental problems in children, was discovered in the city’s water supply. The problem occurred after switching to a new water supply line that wasn’t treated with the proper anti-corrosive agents5. The city itself lacked the financial means to replace the affected pipes, and so the problem has gone mostly untreated, with residents being forced to rely on bottled water if they can afford it, or the more risky boiled water if they cannot6,7.

In order to meet the UN’s Sustainable Development Goals and help communities such as those in Flint, or the sub-Saharan countries, new technologies are being developed that have the potential to aid the detection of contaminated water supplies. With better detection methods, local communities can be warned of any harmful contaminants present before the water is consumed.

For many rural communities, or regions in developing countries, an ideal drinking water testing system needs to quickly test the water at the point of use. Water testing equipment would also have to be light and portable as the main water source may be several miles away for rural communities.

In order to create a solution to this problem, an interdisciplinary team was formed between the University of Bath’s Water Innovation & Research Centre, Centre for Sustainable Chemical Technologies, and Department of Mechanical Engineering, in addition to researchers from the Brazilian Nanotechnology National Laboratory from Sao Paulo, Brazil.

The team created a paper microbial fuel cell8, which is able to detect harmful biological matter in a water sample. The fuel cell itself consists of layers of conductive ink that are screen-printed onto a paper base to form electrodes with a natural bacterial coating. The bacterial coating is able to conduct electricity, producing an electrical signal output. When the fuel cell is submerged in water that contains a biological contaminant, such as formaldehyde or perfluorocarbons, the interaction between the contaminant and the bacterial coating causes a change in the electrical signal, providing a fast and easy detection system.

Dr Mirella Di Lorenzo, Senior Lecturer at the University of Bath and the lead author on this project believes that this water purity sensor can hugely benefit rural communities. She says, “Our goal was to develop a sensing tool for rapid on-site assessments of water quality, which is affordable to everyone, easy-to-be-used by non-experts, light and easy-to-dispose of.”

“[Our sensor] costs less than a pound sterling and is made of compostable materials, such as carbon and paper. Its fabrication is extremely simple and allows easy manufacturing scaling up that can drastically further reduce its cost. The sensor is self-powered, thus making its use suitable for remote areas with poor or no access to electricity.”

Portable testing methods like that developed by Dr Di Lorenzo’s team can be revolutionary for small or remote communities. However, larger communities may also benefit from technologically advanced methods of water testing depending on their situational needs.

The city-state of Singapore has a unique water supply structure. Outside of imported drinking water and treated wastewater or seawater, Singapore’s next largest water source comes from local catchment water9. The local catchment system collects the freshwater rain that falls and feeds it into Singapore’s seventeen major water reservoirs10. From here the water is processed for drinking.

In order to maintain the safety of the drinking water, and the ecological balance in the reservoirs themselves, it is important to be able to detect any impurities or pollutants in the water. To do this, a team of researchers at the National University of Singapore set out to create a system capable of accurate water analysis that can operate over a large area without disrupting the wildlife who rely on the reservoir water to live.

The solution was the New Smart Water Assessment Network11, or the NUSwan. It is a fleet of fully autonomous water testing rigs, hidden beneath plastic model swans, which are capable of sampling the water and mapping the resultant data in real time. The NUSwans are able to check the pH, turbidity, and composition of the water samples in similar ways to the current methods of analysis carried out by the local water authority. However, the NUSwans represent a significant decrease in the usual manpower and labour that would otherwise be necessary12. 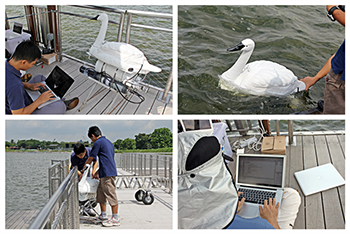 Figure 2: Researchers at NUS deploy one of the NUSwans. (Credit: nus.edu.sg11)

The NUSwan was first developed in 201512 and has been constantly upgraded since then in order to maximise its cost-effectiveness with the aim of making it a viable method for water testing. Professor Mandar Chitre of the National University of Singapore’s Department of Electrical and Computer Engineering reports that this goal has in fact been achieved, “Our technology has been further refined in partnership with our commercial partner. It has also recently been adopted by our water management authorities to monitor several reservoirs in Singapore.”

The future of water testing

It is apparent that methods do currently exist to solve many challenges in the mission to ensure safe drinking water worldwide, and many new and novel systems are still being created by research teams across the globe. Whether these methods are situationally specific, like the NUSwan, or aimed at a wider application, like the paper microbial fuel cell, each new water testing method represents a huge step towards ensuring every person on the planet is able to exercise their human right to clean and safe drinking water.

Alexander Beadle
More from this author >
Advertisement
Chosen for You
Listicle