The ability for humans to digest milk as adults has altered our dietary habits and societies for centuries. But when and how that ability - known as lactase persistence or lactose tolerance - occurred and became established is up for debate. By testing the genetic material from the bones of people who died during a Bronze Age battle around 1,200 BC, an international team of scientists including Krishna Veeramah, PhD, of Stony Brook University, suggest that lactase persistence spread throughout Central Europe in only a few thousand years, an extremely fast transformation compared to most evolutionary changes seen in humans. Their findings are published in Current Biology.

Despite the prominence of milk drinking in Europe and North American today, approximately two-thirds of the world's population remains lactose intolerant. Generally, no mammal digests milk as an adult, which is why for example people should not give adult cat or dog pets milk. However, a subset of humans have a genetic mutation that enables the enzyme lactase to digest the lactose sugar found in milk throughout an individual's lifetime. Many of these people are from Central or Northern Europe.

The battle occurred on the banks of the Tollense, a river in present day Germany, and is the most significant that we know about from Bronze Age Europe, probably consisting of about 4,000 warriors, almost a quarter of which died during the fighting. Despite being more than three thousand years old, the researchers were able to sequence DNA from some of the bone fragments recovered from the battle site. 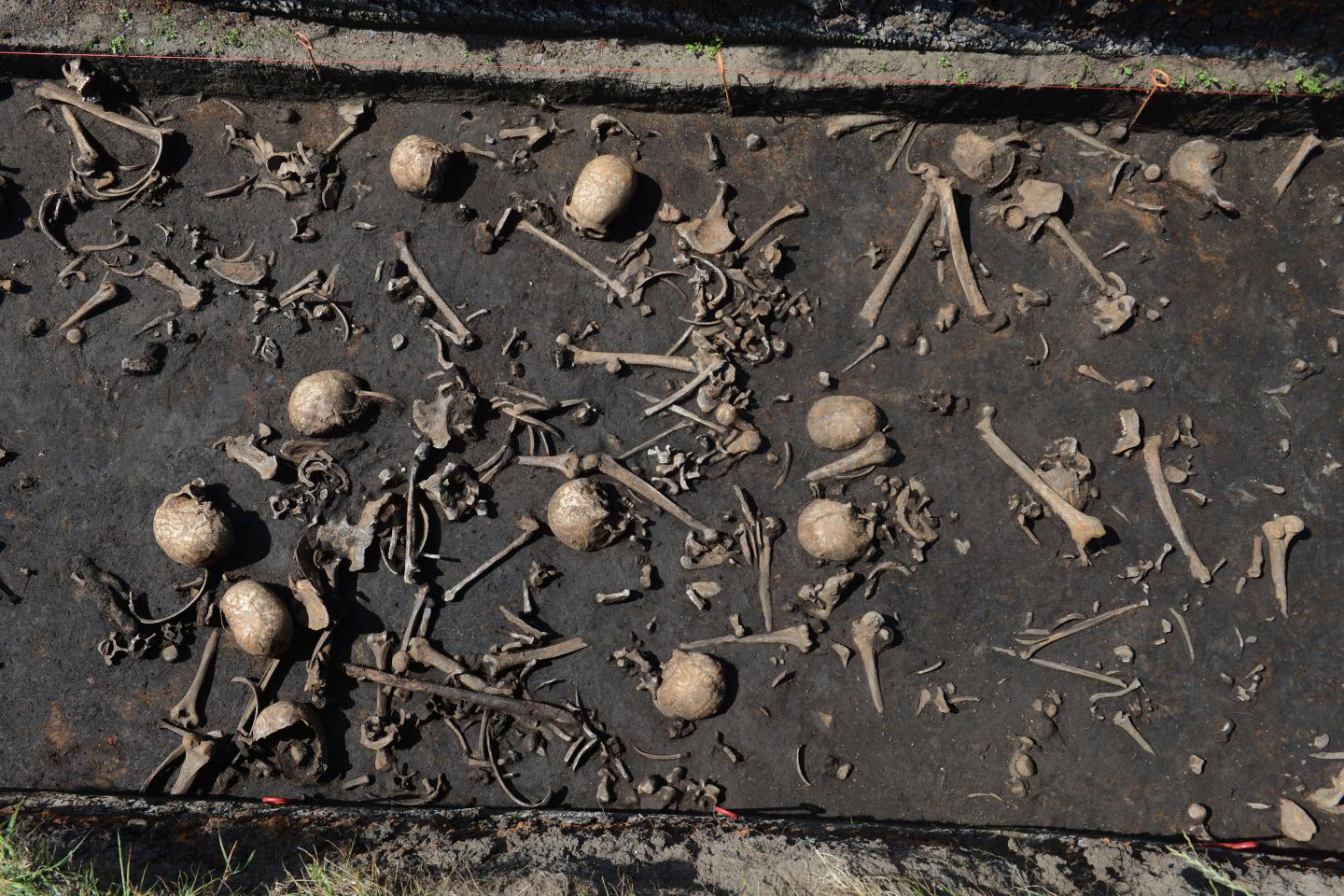 Various bones at a Bronze Age battle excavation site, some of which were genetically tested to determine the presence of the lactase-persistent gene. Credit: Stefan Sauer / Tollense Valley Project.

The research team, led by Joachim Burger and colleagues at Johannes Gutenberg University Mainz (JGU), found that despite the battle occurring more than 4,000 years after the introduction of agriculture in Europe - which in part would have involved the consumption of dairy from early cattle, goats and sheep domesticates - only one in eight of the warriors had a genetic variant that enabled them to break down lactose.

"When we look at other European genetic data from the early Medieval period less than 2,000 years later, we find that more than 60 percent of individuals had the ability to drink milk as adults, close to what we observe in modern Central European countries, which ranges from 70 to 90 percent" said Veeramah. "This is actually an incredibly fast rate of change for the gene that controls milk digestion. It appears that by simply possessing this one genetic change, past European individuals with the ability to digest lactose had a six percent greater chance of producing children than those who could not. This is the strongest evidence we have for positive natural selection in humans."

Joachim Burger of JGU, lead author on the study, added that there still is not definitive answer to the question: Why did being able to digest the sugar in milk after infancy provide such a big evolutionary advantage?

"With milk being a high-energy, relatively uncontaminated drink, its ingestion may have provided greater chances of survival during food shortages or when supplies of drinking water may have been contaminated," explained Burger.

People with celiac disease may find themselves more comfortable with extra Thanksgiving turkey. Researchers have found that tryptophan, an amino acid present in high amounts in turkey, combined with some probiotics, may help them heal and respond better to a gluten-free diet.

END_OF_DOCUMENT_TOKEN_TO_BE_REPLACED

How Hot Is That Chili? A Smart Phone Device Can Now Tell You

Some people love spicy food – the hotter, the better. Others go out of their way to avoid the palate-singeing burn of capsaicin, the compound that gives chili peppers their kick. Now, researchers have developed a portable device (whimsically shaped like a chili pepper) that can reveal how much capsaicin a pepper contains, before biting into it.

END_OF_DOCUMENT_TOKEN_TO_BE_REPLACED

How safe is your Sage? That’s the question posed by researchers after finding more than a quarter of samples of the popular herb were adulterated – some by as much as 58%.

END_OF_DOCUMENT_TOKEN_TO_BE_REPLACED

A Potential Diagnostic Test and Molecular Target for Machado-Joseph Disease

END_OF_DOCUMENT_TOKEN_TO_BE_REPLACED

Climate Is a Likely Barrier to the Spread of Africanized Bees