Can We Reliably Predict Monsoons?

Holly Large is a PhD student at the University of Leicester, with interests in public health genomics and science communication.
Learn about our editorial policies
News

Can We Reliably Predict Monsoons?

Holly Large is a PhD student at the University of Leicester, with interests in public health genomics and science communication.
Learn about our editorial policies
Credit: Unsplash
Read time:

Complete the form below and we will email you a PDF version of "Can We Reliably Predict Monsoons?"

In a new study published in Science Advances, researchers describe a novel way of overcoming the difficulties in predicting the South Asian summer monsoon (SASM).

When you think of a monsoon, your primary thought may be of of rain – and you’re not entirely wrong – but a monsoon actually represents a seasonal change in the direction of the prevailing winds in a region. It is this change in direction that brings about a shift in the weather, which can either be a dry or a wet spell.

Met Office meteorologists Clare Nasir and Aidan McGivern explain what monsoons are and the reasons behind them.

However, the SASM isn’t just a weather phenomenon; over a billion people in South Asia rely on it as their principal water supply. Too little rain and this supply disappears, too much, and there can be severe flooding. Both can have a significant impact on agriculture, the economy and ecosystems. With climate change, these extremes could become all the more frequent and dramatic.

As a result, it’s vitally important for climate researchers to be able to predict SASM rainfall in the near future, which could help at-risk communities adapt to such changes. However, it’s well-recognized that projections generated from current methods can be rife with uncertainty.

Why are monsoons so difficult to predict?

The ambiguity in the way researchers currently predict monsoons stems from a number of factors, a significant one being the natural variability in the Earth’s climate.

"Internal variability refers to variations in the mean state due to natural internal processes within the climate system. It is usually regarded as 'noise' in climate projection," explained lead author Xin Huang.

In their research, Huang and colleagues looked to distinguish the main contributors to this noise, in the hopes that by identifying them, they could find a way to reduce uncertainty in SASM rainfall predictions.

Using simulations of the global climate system generated by the Max Planck Institute and Canadian Earth System Models, the researchers analyzed the similarities and differences in 150 projections of SASM rainfall in the near future (classified as the next 15 to 30 years). From this, they discovered that there was a link between the evolution of the Pacific Decadal Oscillation (PDO) or Interdecadal Pacific Oscillation (IPO) – these are weather patterns affecting the Pacific over a 20-30 year period – and differences in the magnitude of SASM rainfall trends.

To investigate this link Huang and colleagues excluded the influence of the IPO. When they did this, there was a reduction in the breadth of differences between predictions, allowing them to conclude that the IPO was one of the dominant climate patterns negatively affecting SASM rainfall projections. 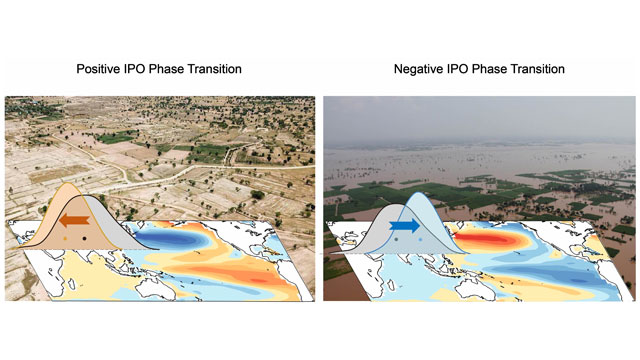 The authors suggest that in the future, by accurately predicting the evolution of the IPO, it can then be factored into the simulations projecting the SASM, in turn helping those predictions to become more reliable.

"A large part of climate change adaptation and mitigation activities is based on prognoses delivered by climate models, so a highly robust and reliable climate prediction is the base of policy decision making,” says corresponding author Professor Tianjun Zhou. “This research provides a practical way of more reliably projecting near-term SASM changes.”