Led by Iowa State, the center is a partnership that includes Carnegie Mellon University (Pittsburgh, Penn.), the University of Virginia (Charlottesville, Va.) and the University of California, Irvine (Irvine, Calif.). Its research will focus on improving the statistical foundation for fingerprint, firearm, toolmark, dental and other pattern evidence analyses, and for computer, video, audio and other digital evidence analyses.

“The creation of the Forensic Science Center of Excellence marks a significant milestone in the national effort to establish more rigorous, science-based standards and practices for forensic evidence analysis,” said Under Secretary of Commerce for Standards and Technology and NIST Director Willie E. May. “The work of the center will help reduce measurement errors and increase confidence in the results achieved with improved statistical tools and methods.”

“Forensic science plays a critical role in solving crimes, bringing perpetrators to justice and safeguarding the innocent from wrongful convictions,” said Deputy Attorney General of the United States Sally Quillian Yates. “With its focus on pattern and digital evidence, the Forensic Science Center of Excellence will be an invaluable tool for defendants, prosecutors, judges and everyone involved in the criminal system.” 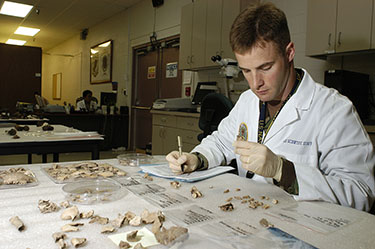 A U.S. Navy forensic odontologist studies dental remains of a possible missing service member. The mission of the new Forensic Science Center of Excellence is improving the standards and practices for the statistical analysis of forensic evidence, including dental. Credit: Cpl. James P. Johnson, U.S. Army

NIST and university scientists working within the new center will develop tools to evaluate pattern and digital evidence analysis methods for how well they consider statistical modeling errors and uncertainties in measurement. This will allow forensic scientists to quantify the level of confidence they have in statistical computations made with these methods and the conclusions reached from those analyses.

The center also will develop and implement an education and training program to ensure that judges, lawyers and forensic science investigators can effectively decipher the results of statistical analyses on pattern and digital evidence.

At present, only DNA forensics has a strong, science-based statistical foundation for accuracy, reliability and data interpretation that supports its use as evidence in criminal court cases. The work at the center will complement NIST’s own multidisciplinary research program in forensic science, as well as collaborative work with the Department of Justice.

What Are ”Forever Chemicals” and How Do We Deal With Them?