The algae is a functional ingredient of a bioreactor system designed by Drexel environmental engineers to remove several chemicals from wastewater at once — shortcutting a process that normally takes multiple steps, expensive ingredients, and a great deal of time.

Municipal water treatment facilities put wastewater — that is, any water that is collected by the sewage system, everything from households to street drains — through a gauntlet of processes that physically and chemically strain out or otherwise neutralize the bits deemed hazardous to humans or damaging to the environment before it is returned to the nearest stream or river.

Christopher Sales, PhD, an assistant professor in the College of Engineering and a member of the research team at the A.J. Drexel Institute for Energy and the Environment, aims to improve wastewater treatment with a little help from algae and its symbiotic relationship with the bacteria to remove excess nitrogen from water. 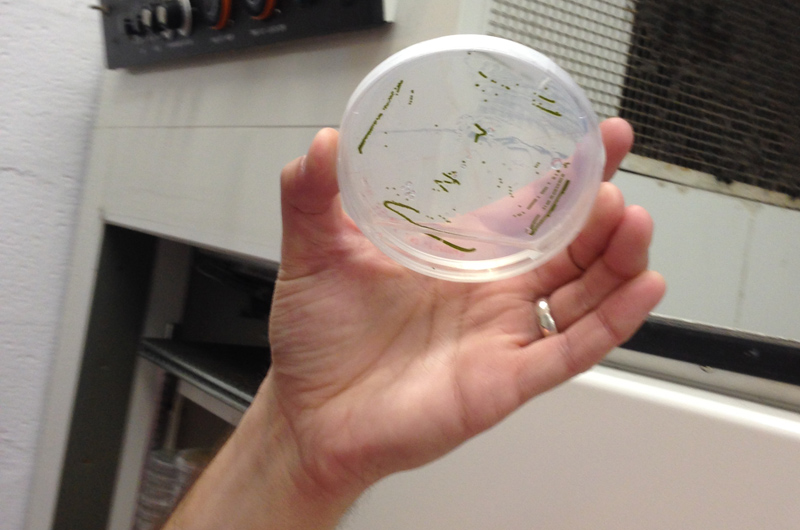 “One of the most time-consuming and expensive components to wastewater treatment today is ridding water of nutrients such as nitrogen and phosphorus, which often make their way into water from our household toilets and sinks,” Sales said. “It’s an essential step because the release of excess nitrogen species into a water supply can lead to accelerated growth of cyanobacteria and algae — and create a massive algal bloom like the one in Lake Erie last summer which caused the contamination of the entire water supply of Toledo, Ohio.”

In 2006, Sales, along with a colleague from the University of Pennsylvania, developed a water treatment device, called a high density bioreactor, that can cultivate a dense mixture of microorganisms — called activated sludge — which are used to remove oxygen organic carbon compounds from wastewater. Since then Sales and his lab at Drexel have added algae to the mix to improve the reactor’s nitrogen-removal capabilities and allow for the recovery of a potentially valuable resource: algal biomass.

This development is quite significant because today’s predominant nitrogen-removal techniques involve multi-step processes that push water through as many as four different tanks and require a period of time for nitrogen-removing bacteria to settle of out of the water.

In the first step of this involved process, oxygen is bubbled into the water to convert dissolved nitrogen into is chemical cousin, nitrate. The water is then mixed with bacteria that use the nitrate for respiration and expel it into the atmosphere as nitrogen gas — much like humans breathe oxygen and exhale carbon dioxide. Then, after the bacteria have done their job, the water is pumped into another tank until they’ve settled out and the treated effluent can be released into the nearest body of water. This process is both energy intensive and it requires a large facility to accommodate tanks for nitrification, denitrification and settling.

“The process of nitrification requires a significant amount of energy because the tanks of nitrifying bacteria need to be constantly aerated to provide oxygen to drive the conversion of ammonium to nitrate,” Sales said. “Similarly, wastewater treatment plants often need to add chemicals, such as methanol, to provide denitryfing bacteria with enough food to transform the nitrate from the nitrification process into nitrogen gas.”

By contrast, Sales’s bioreactor works by continuously cycling water into an algae and bacteria-laden environment, removing nitrogen by storing it in algae that can be easily separated from water in their new reactor. His data indicates that it can remove up to 80 percent of nitrogen from a waste stream.

In addition, Sales’s system does not require a separate settling tank because the flow of the reactor is designed to naturally promote settling of biomass. This separation, Sales speculates, could one day make the algae cultivated in these bioreactors an appealing source of biofuel feedstock because it wouldn’t require as much energy to dry out as pond-grown algae.

The lab-scale prototype looks like a rather elaborate chemistry experiment — which it is, essentially. A 1000-milliliter graduated cylinder filled with a gradient of green liquid is the centerpiece of a plumbing circuit that begins in a water jug of synthetic wastewater, feeds through a pump, a bubbling beaker and eventually through the flask of algae and bacteria before emptying into a bucket as “treated effluent.”

Wastewater enters the bioreactor with high concentrations of ammonia and nitrate due to their presence in raw and processed wastewater. A diverse microbial community, composed of some 350 different species, can either metabolize ammonia to nitrate or convert dead algal cells into carbon dioxide. The algae use these byproducts to grow and perform photosynthesis, which, in turn, produces oxygen that helps the bacteria thrive. Thus the cycle removes nitrogen from wastewater while also growing a healthy crop of algae and bacteria.

“Our wastewater is actually the perfect environment for algae and bacteria to thrive in a symbiotic circle of life,” said Jacob Price a doctoral researcher in Sales’s lab. “Nitrate is a common ingredient in fertilizers. Plants use it, along with carbon dioxide and light, through the process of photosynthesis and carbon fixation, to fuel growth. A byproduct of photosynthesis is oxygen, which is used by organisms — like bacteria — for their commensurate life processes. It’s a beautifully natural relationship that we can harness to clean our water.”