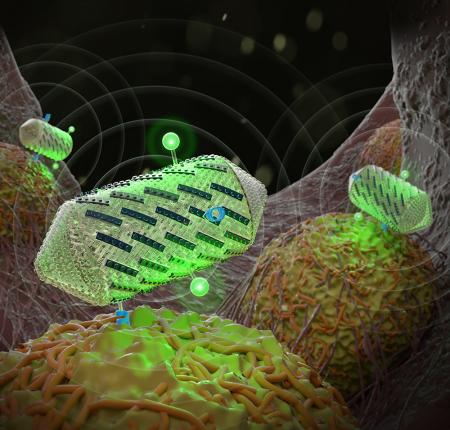 Ultrasound imaging is used around the world to help visualize developing babies and diagnose disease. Sound waves bounce off the tissues, revealing their different densities and shapes. The next step in ultrasound technology is to image not just anatomy, but specific cells and molecules deeper in the body, such as those associated with tumors or bacteria in our gut.

A new study from Caltech outlines how protein engineering techniques might help achieve this milestone. The researchers engineered protein-shelled nanostructures called gas vesicles—which reflect sound waves—to exhibit new properties useful for ultrasound technologies. In the future, these gas vesicles could be administered to a patient to visualize tissues of interest. The modified gas vesicles were shown to: give off more distinct signals, making them easier to image; target specific cell types; and help create color ultrasound images.

"It's somewhat like engineering with molecular Legos," says assistant professor of chemical engineering and Heritage Principal Investigator Mikhail Shapiro, who is the senior author of a new paper about the research published in this month's issue of the journal ACS Nano and featured on the journal's cover. "We can swap different protein 'pieces' on the surface of gas vesicles to alter their targeting properties and to visualize multiple molecules in different colors."

"Today, ultrasound is mostly anatomical," says Anupama Lakshmanan, a graduate student in Shapiro's lab and lead author of the study. "We want to bring it down to the molecular and cellular level."

In 2014, Shapiro first discovered the potential use of gas vesicles in ultrasound imaging. These gas-filled structures are naturally occurring in water-dwelling single-celled organisms, such as Anabaena flos-aquae, a species of cyanobacteria that forms filamentous clumps of multicell chains. The gas vesicles help the organisms control how much they float and thus their exposure to sunlight at the water's surface. Shapiro realized that the vesicles would readily reflect sound waves during ultrasound imaging, and ultimately demonstrated this using mice.

In the latest research, Shapiro and his team set out to give the gas vesicles new properties by engineering gas vesicle protein C, or GvpC, a protein naturally found on the surface of vesicles that gives them mechanical strength and prevents them from collapsing. The protein can be engineered to have different sizes, with longer versions of the protein producing stronger and stiffer nanostructures.

"The proteins are like the framing rods of an airplane fuselage. You use them to determine the mechanics of the structure." Shapiro says.

In one experiment, the scientists removed the strengthening protein from gas vesicles and then administered the engineered vesicles to mice and performed ultrasound imaging. Compared to normal vesicles, the modified vesicles vibrated more in response to sound waves, and thus resonated with harmonic frequencies. Harmonics are created when sound waves bounce around, for instance in a violin, and form new waves with doubled and tripled frequencies. Harmonics are not readily created in natural tissues, making the vesicles stand out in ultrasound images.

In another set of experiments, the researchers demonstrated how the gas vesicles could be made to target certain tissues in the body. They genetically engineered the vesicles to display various cellular targets, such as an amino acid sequence that recognizes proteins called integrins that are overproduced in tumor cells.

"Adding these functionalities to the gas vesicles is like snapping on a new Lego piece; it's a modular system," says Shapiro.

The team also showed how multicolor ultrasound images might be created. Conventional ultrasound images appear black and white. Shapiro's group created an approach for imaging three different types of gas vesicles as separate "colors" based on their differential ability to resist collapse under pressure. The vesicles themselves do not appear in different colors, but they can be assigned colors based on their different properties.

To demonstrate this, the team made three different versions of the vesicles with varying strengths of the GvpC protein. They then increased the ultrasound pressures, causing the variant populations to successively collapse one by one. As each population collapsed, the overall ultrasound signal decreased in proportion to the amount of that variant in the sample, and this signal change was then mapped to a specific color. In the future, if each variant population targeted a specific cell type, researchers would be able to visualize the cells in multiple colors.

"You might be able to see tumor cells versus the immune cells attacking the tumor, and thus monitor the progress of a medical treatment," says Shapiro.