Determining the Age of Fingerprints

Determining the Age of Fingerprints

Complete the form below to unlock access to this Audio Article: "Determining the Age of Fingerprints"

In a proof-of-concept paper,* NIST chemists Shin Muramoto and Edward Sisco tested the idea that you could tell how old a fingerprint is by the degree to which the biomolecules, such as fatty acids, in the fingerprint’s ridges have migrated down into the valleys. There have been a number of proposals for fingerprint dating in recent years, but the technique used by Muramoto and Sisco has a potential advantage in that it doesn’t depend on chemical changes in the fingerprint, which are highly dependent on circumstances. Rather, it depends primarily on molecular weight and fairly well-understood models of molecular diffusion.

Even the approximate age of a fingerprint can have a critical bearing on forensic results. It can rule out some prints as being too old to be relevant to a crime scene or, conversely, to help fix the time of the crime. Military forensics experts would like to be able to date the multitude of fingerprints found on improvised bombs used by insurgents to winnow out prints of individuals who may simply have handled the components in a shop from those of the actual bombmakers. But a reliable technique has yet to be found. 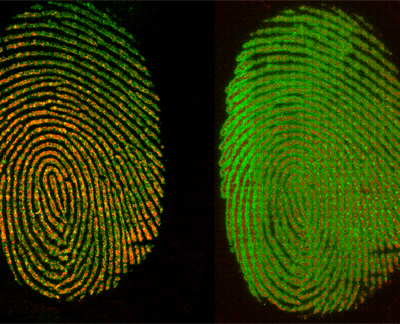 “People have tried for 30 or 40 years to date fingerprints, usually by looking at changes in bulk chemical properties,” says Sisco, but the specific chemical make-up of a fingerprint varies hugely from person to person, and the chemical changes with time depend heavily on the environment.

“We map chemical composition with a submicrometer resolution and look at how the compounds move,” Sisco says, explaining that most of the material deposited in a fingerprint initially is in the ridges of the pattern, but over time it diffuses down into the valleys. Smaller molecules move faster, heavier ones slower, but all can be modeled with a standard function for molecular diffusion.

The NIST paper only reports on aging fingerprints up to four days, but Sisco says that in fact, “you can distinguish between the first day and a week, between a week and a month, between a month and four months.”

Given the promising results of their initial study, the NIST researchers say the next steps are to test the technique over longer timespans, on more realistic surfaces such as metal or paint, and under more uneven environmental conditions.

Who Was the Father of Modern Plastic Surgery?