Access to clean water is a major concern for nations around the globe. The new device can measure pollution in oceans, lakes, and rivers, and even in the home.

“I was frustrated that we weren’t measuring contaminants as often or as well as we should, just because it was too labor-intensive and costly,” says Vlahos. “This device lets us test more bodies of water quickly, easily, and inexpensively, and yields results that better reflect the overall situation. The potential environmental impact is huge.”

Currently, if the quality of a body of water needs testing, a large sample is collected – between five and 20 liters of water – and is then transported to a lab for analysis. This process, known as “grab sampling,” is labor-intensive and can be prohibitively expensive. As a result, small-scale testing by citizens who want to measure contaminants in a local stream or in their private wells isn’t feasible.

In contrast, Vlahos says her technology is so easy a child could do it. In fact, the device doesn’t require collecting a water sample at all, because it uses a process called “passive sampling.” The small, ecofriendly sampling device is placed directly into the body of water being tested, where it stays for a few hours and is then removed. Once back in the lab, it takes a little over two hours to conduct a full analysis of the water’s target contaminant levels.

Another important feature of the new technology is that it provides continuous sampling over time, which isn’t possible with grab sampling. Since the device remains in the water, it gives a more representative picture of an aquatic environment’s overall health, instead of the limited snapshot from grab sampling. Because of their low cost, a greater number of the semi-disposable passive samplers can be simultaneously deployed over a larger area to yield more comprehensive and informative data. 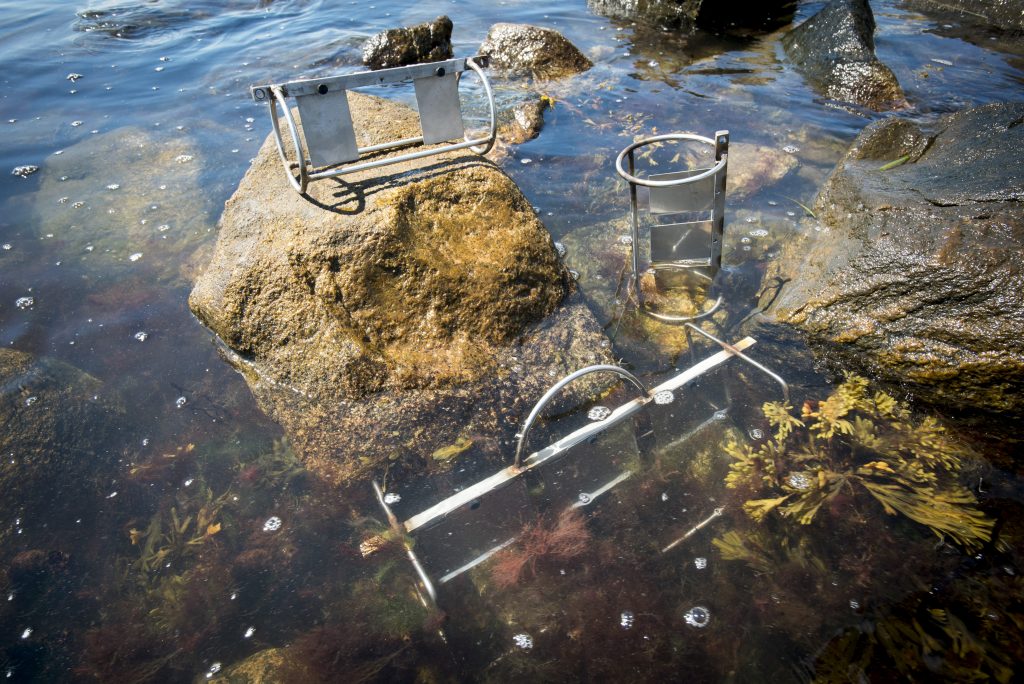 The device currently measures a host of organic contaminants, such as industrial chemicals like PCBs (polychlorinated biphenyls), pesticides, synthetic chemicals that mimic hormones like estrogen, and even munition compounds from unexploded weapons that find their way into bodies of water. Vlahos has already tested the technology in a variety of aquatic and sedimentary environments, both nationally and internationally.

Although Vlahos was confident in her technology’s ability to improve on standard industry practices, she wasn’t sure how to commercialize it or who the target customer would be. So she and Warren turned to Accelerate UConn, a program that helps entrepreneurial faculty and students at all UConn campuses validate their technology business ideas.

Learning the Ropes of Starting a Business

The program was launched in May 2015, and is jointly operated by the Office of the Vice President for Research and the Connecticut Center for Entrepreneurship and Innovation (CCEI), housed in the School of Business.

“Many UConn innovations have valuable, real-world applications, but our faculty and students need the right tools to successfully commercialize them,” says Jeff Seemann, UConn vice president for research. “Accelerate UConn provides those tools, and helps promising technologies take those critical first steps towards the market, where they can benefit the state’s citizens and economy.”

Warren, who has long aspired to be an entrepreneur, acted as the team’s ‘entrepreneurial lead.’ He was responsible for attending weekly webinars, making presentations, and conducting interviews with potential customers to validate the researchers’ assumptions about their technology and the market.

He says he could relate to the program’s Lean Launchpad methodology because of his background in science.

“Even though commercializing a technology was totally new to me, the framework they provided was familiar,” says Warren. “By running small iterations of ‘experiments’ on products or services with potential customers, you can really shape your business before you have to fully launch, and do a lot of the learning before you spend lots of time and money.”

The knowledge that participants gain from completing the Accelerate UConn program can serve as a stepping stone for additional funding through internal sources, like the UConn SPARK Technology Commercialization Fund, as well as external sources like federal Small Business Innovation Research grants.

Warren recently won a $15,000 Summer Fellowship offered by CCEI, where he and Vlahos were able to build upon the progress they had made in Accelerate UConn. As a result, he was also selected to compete for an additional $15,000 provided through the Wolff New Venture Competition this September.

Timothy B. Folta, UConn professor of business and CCEI faculty director, says entrepreneurs like Vlahos and Warren gain a new outlook on their products from participating in Accelerate UConn, and this can be important for their success as entrepreneurs.

“One of the most potent criticisms of university technology commercialization is that technologists do not have a good understanding about whether customers really want their technology, because they are enamored with it,” Folta says. “Accelerate UConn aims to correct this bias.”

Vlahos and Warren are not slowing down. They are actively seeking additional internal and external funding, are continuing to develop new applications for their device, and plan to conduct more pilot tests on the technology in the coming months.