A medication commonly taken for Type II diabetes, which is being found in freshwater systems worldwide, has been shown to cause intersex in fish –male fish that produce eggs.

A study by Rebecca Klaper at the University of Wisconsin-Milwaukee determined exposure to the diabetes medicine metformin causes physical changes in male fish exposed to doses similar to the amount in wastewater effluent. 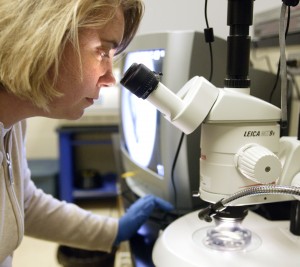 In addition to intersex conditions, fish exposed to metformin were smaller in size than those not exposed, said Klaper, a professor in UWM’s School of Freshwater Sciences.

The study, co-authored by Nicholas Niemuth, a researcher in Klaper’s lab, was recently published in the journal Chemosphere.

Because intersex fish are particularly prevalent downstream from wastewater treatment plants, many studies have investigated the effect of hormones from birth control pills, Klaper said.

Initially, the results of her study seemed surprising since metformin is not a hormone and it targets blood sugar regulation.

But Klaper said it is also prescribed to women with a common hormonal disease called polycystic ovary syndrome. The research in her lab indicates metformin could be a potential endocrine disruptor – a chemical that confuses the body’s complicated hormonal messaging system, interrupting a range of normal activities, including reproduction.

Of the chemicals she has detected in water samples collected from Lake Michigan, metformin stands out, Klaper said.

“It is the chemical we found in almost every sample and in the highest concentrations compared to other emerging contaminants – even higher than caffeine,” she said.

The prevalence of the chemical in samples led Klaper to investigate what effects the medication may have in the environment. In a previous study, she exposed mature fish to metformin, and although there were no physical changes, she found the genes related to hormones for egg production were being expressed in males as well as females – an indication of endocrine disruption.

For the current study, the researchers monitored fish that had continuous exposure to metformin from birth to adulthood. The next step is to determine the corresponding changes in the genome, which Klaper is doing at UWM’s Great Lakes Genomic Center.

“We’re now working on a paper that investigates the metabolic pathways at various points in the fishes’ life to see what is changing with exposure,” she says.