Graphene, an atom-thick material with extraordinary properties, is a promising candidate for the next generation of dramatically faster, more energy-efficient electronics. However, scientists have struggled to fabricate the material into ultra-narrow strips, called nanoribbons that could enable the use of graphene in high-performance semiconductor electronics.

Now, University of Wisconsin-Madison engineers have discovered a way to grow graphene nanoribbons with desirable semiconducting properties directly on a conventional germanium semiconductor wafer. This advance could allow manufacturers to easily use graphene nanoribbons in hybrid integrated circuits, which promise to significantly boost the performance of next-generation electronic devices. The technology could also have specific uses in industrial and military applications, such as sensors that detect specific chemical and biological species and photonic devices that manipulate light. 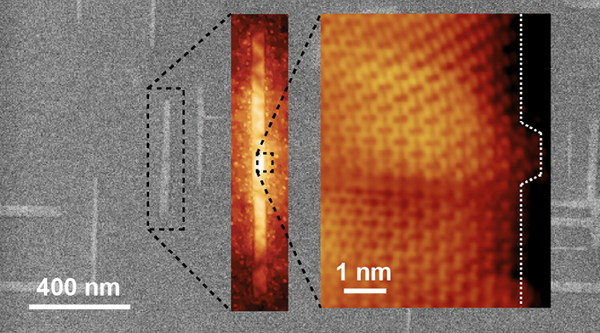 Michael Arnold, an associate professor of materials science and engineering at UW-Madison, Ph.D. student Robert Jacobberger, and their collaborators describe their new approach to producing graphene nanoribbons. Importantly, their technique can easily be scaled for mass production and is compatible with the prevailing infrastructure used in semiconductor processing.

"Graphene nanoribbons that can be grown directly on the surface of a semiconductor like germanium are more compatible with planar processing that's used in the semiconductor industry, and so there would be less of a barrier to integrating these really excellent materials into electronics in the future," Arnold says.

Graphene, a sheet of carbon atoms that is only one atom in thickness, conducts electricity and dissipates heat much more efficiently than silicon, the material most commonly found in today's computer chips. But to exploit graphene's remarkable electronic properties in semiconductor applications where current must be switched on and off, graphene nanoribbons need to be less than 10 nanometers wide, which is phenomenally narrow. In addition, the nanoribbons must have smooth, well-defined "armchair" edges in which the carbon-carbon bonds are parallel to the length of the ribbon.

To overcome these hurdles, the UW-Madison researchers pioneered a bottom-up technique in which they grow ultra-narrow nanoribbons with smooth, straight edges directly on germanium wafers using a process called chemical vapor deposition. In this process, the researchers start with methane, which adsorbs to the germanium surface and decomposes to form various hydrocarbons. These hydrocarbons react with each other on the surface, where they form graphene.

Arnold's team made its discovery when it explored dramatically slowing the growth rate of the graphene crystals by decreasing the amount of methane in the chemical vapor deposition chamber. They found that at a very slow growth rate, the graphene crystals naturally grow into long nanoribbons on a specific crystal facet of germanium. By simply controlling the growth rate and growth time, the researchers can easily tune the nanoribbon width be to less than 10 nanometers.

"What we've discovered is that when graphene grows on germanium, it naturally forms nanoribbons with these very smooth, armchair edges," Arnold says. "The widths can be very, very narrow and the lengths of the ribbons can be very long, so all the desirable features we want in graphene nanoribbons are happening automatically with this technique."

The nanoribbons produced with this technique start nucleating, or growing, at seemingly random spots on the germanium and are oriented in two different directions on the surface. Arnold says the team's future work will include controlling where the ribbons start growing and aligning them all in the same direction.

The researchers are patenting their technology through the Wisconsin Alumni Research Foundation. The research was primarily supported by the Department of Energy's Basic Energy Sciences program.

The Arnold group worked closely with various collaborators, including Nathan Guisinger at Argonne National Laboratory, Mark C. Hersam of Northwestern University, Richard Martel of the University of Montreal, and Patrick Desjardins of Polytechnique Montreal in addition to the research groups of Paul Evans and Max Lagally in the UW-Madison Department of Materials Science and Engineering, each of whom conducted important studies to determine the structure of the nanoribbons.