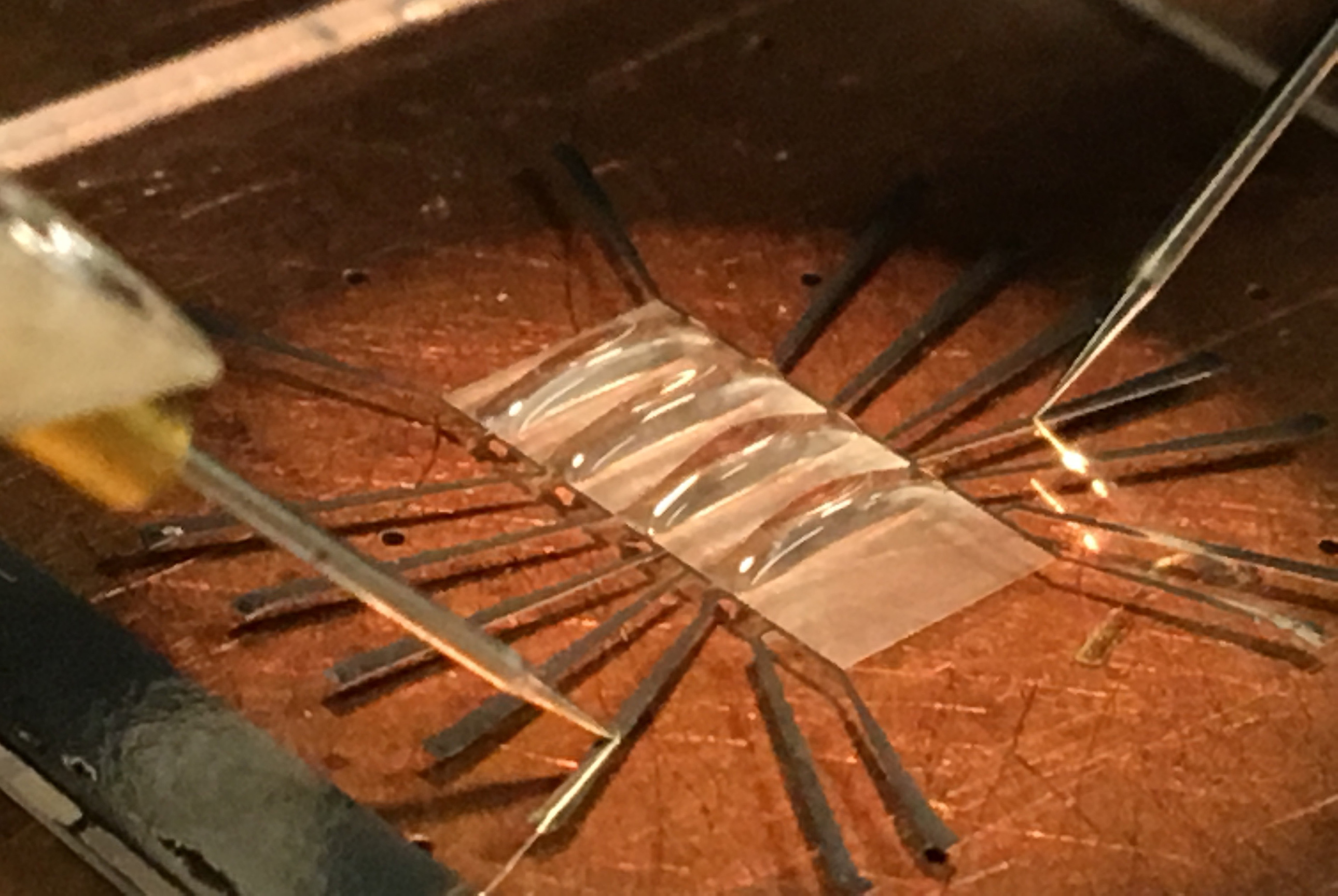 A new type of electronic sensor may lead to devices that detect and classify bacteria for medical diagnostics and food safety. (Purdue University photo/Aida Ebrahimi)

A new type of electronic sensor that might be used to quickly detect and classify bacteria for medical diagnostics and food safety has passed a key hurdle by distinguishing between dead and living bacteria cells.

Conventional laboratory technologies require that samples be cultured for hours or longer to grow enough of the bacteria for identification and analysis, for example, to determine which antibiotic to prescribe. The new approach might be used to create arrays of hundreds of sensors on an electronic chip, each sensor detecting a specific type of bacteria or pinpointing the effectiveness of particular antibiotics within minutes.

"We have taken a step toward this long-term goal by showing how to distinguish between live and dead bacteria," said Muhammad Ashraful Alam, Purdue University's Jai N. Gupta Professor of Electrical and Computer Engineering. "This is important because you need to be able to not only detect and identify bacteria, but to determine which antibiotics are effective in killing them."

Findings are detailed in a research paper appearing this week in Proceedings of the National Academy of Sciences. The paper was authored by doctoral student Aida Ebrahimi and Alam. The droplet sensor evolved from a device originally designed to detect small concentrations of negatively charged DNA molecules in research that began about four years ago, Ebrahimi said.

"We did not anticipate that the sensor could be used to tell live and dead bacteria apart – it was a chance observation that eventually led us to this elegant way of measuring cell viability," she said.

As described in the PNAS paper, the sensor works by detecting changes in electrical conductivity in droplets containing bacteria cells. (A YouTube video about the research is available at https://youtu.be/QN019bQJCb8).

"To see if someone is alive," Alam said, "we can either count the grandchildren many generations later, which is analogous to the traditional growth-based techniques. Or, we can directly measure the person's pulse, analogous to the proposed 'osmoregulation-based' detection of bacteria. Needless to say, immediate physiological measurement is faster and far superior."

Bacteria cells maintain the proper internal pressure through osmoregulation, a process in which water, salts and other molecules move across the cell membrane. As a droplet begins to evaporate on the sensor, bacteria cells contained in the droplet detect the increasingly salty environment, triggering emergency valves called osmoregulatory transporters in the cell membrane. The cells then either take in or release water and charged molecules including salts, changing the electrical conductivity of the surrounding fluid in the droplet, which is measured by electrodes. This change in electrical conductivity varies according to whether a bacteria cell is dead or alive and also might be used to identify specific types of bacteria because they use fundamentally different osmoregulatory channels.

"Aida proved the hypothesis by using genetically mutated cells that do not have those osmoregulatory channels and therefore are less effective in regulating the pressure differential," Alam said.

The sensor's surface was designed specifically to maintain the shape of a droplet, which is critical for the technology to work. Two other advances making the sensor possible are the ability to measure the changing electrical conductivity in the droplet and harnessing a cell’s osmoregulation as the basis for detection.

"In the end you want to provide a new tool for medicine and food safety, so you need to be able to quickly identify bacteria and the right antibiotics to treat infection," Alam said. "That requires an understanding of the dynamics of the cell membrane."

The technology, which was tested with low concentrations of living and dead forms of E. coli, Salmonella and S. epidermidis bacteria, is said to be label-free because it does not require that samples be treated with fluorescent dyes, making it a potentially practical tool for medicine and food safety. Much of the research was performed at the Birck Nanotechnology Center and Bindley Bioscience Center in Purdue's Discovery Park.

The researchers have received a provisional patent on the concept through the Purdue Research Foundation's Office of Technology Commercialization.

This work was funded by the National Science Foundation (Award number 1403582). In addition, Ebrahimi is supported by a Bilsland Dissertation Fellowship Award from Purdue.