The researchers have described a way to selectively rearrange the nanoparticles in three-dimensional arrays to produce different configurations, or phases, from the same nano-components.

"One of the goals in nanoparticle self-assembly has been to create structures by design," said Oleg Gang, who led the work at Brookhaven'sCenter for Functional Nanomaterials (CFN), a DOE Office of Science User Facility. "Until now, most of the structures we've built have been static.  Now we are trying to achieve an even more ambitious goal: making materials that can transform so we can take advantage of properties that emerge with the particles' rearrangements."The ability to direct particle rearrangements, or phase changes, will allow the scientists to choose the desired properties—say, the material's response to light or a magnetic field—and switch them as needed. Such phase-changing materials could lead to new applications, such as dynamic energy-harvesting or responsive optical materials. 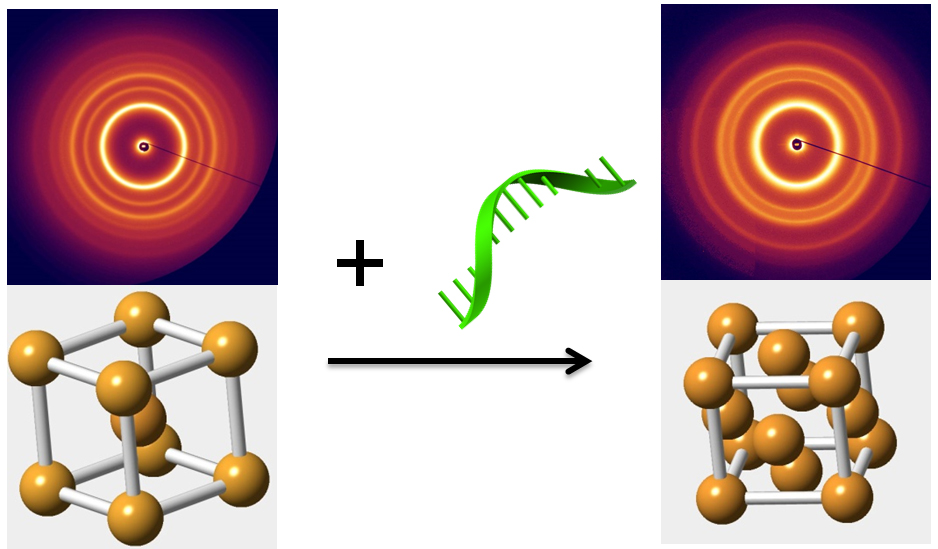 Introducing "reprogramming" DNA strands into an already assembled nanoparticle array triggers a transition from a "mother phase," where particles occupy the corners and center of a cube (left), to a more compact "daughter phase" (right). Such phase-changes could potentially be used to switch a material's properties on demand.

This latest advance in nanoscale engineering builds on the team's previous work developing ways to get nanoparticles to self-assemble into complex composite arrays, including linking them together with tethers constructed of complementary strands of synthetic DNA. In this case, they started with an assembly of nanoparticles already linked in a regular array by the complementary binding of the A, T, G, and C bases on single stranded DNA tethers, then added "reprogramming" DNA strands to alter the interparticle interactions.

"We know that properties of materials built from nanoparticles are strongly dependent on their arrangements," said Gang. "Previously, we've even been able to manipulate optical properties by shortening or lengthening the DNA tethers. But that approach does not permit us to achieve a global reorganization of the entire structure once it's already built."

In the new approach, the reprogramming DNA strands adhere to open binding sites on the already assembled nanoparticles. These strands exert additional forces on the linked-up nanoparticles.

"By introducing different types of reprogramming DNA strands, we modify the DNA shells surrounding the nanoparticles," explained CFN postdoctoral fellow Yugang Zhang, the lead author on the paper. "Altering these shells can selectively shift the particle-particle interactions, either by increasing both attraction and repulsion, or by separately increasing only attraction or only repulsion. These reprogrammed interactions impose new constraints on the particles, forcing them to achieve a new structural organization to satisfy those constraints."

Using their method, the team demonstrated that they could switch their original nanoparticle array, the "mother" phase, into multiple different daughter phases with precision control.

This is quite different from phase changes driven by external physical conditions such as pressure or temperature, Gang said, which typically result in single phase shifts, or sometimes sequential ones. "In those cases, to go from phase A to phase C, you first have to shift from A to B and then B to C," said Gang. "Our method allows us to pick which daughter phase we want and go right to that one because the daughter phase is completely determined by the type of DNA reprogramming strands we use."

The scientists were able to observe the structural transformations to various daughter phases using a technique called in situ small-angle x-ray scattering at the National Synchrotron Light Source, another DOE Office of Science User Facility that operated at Brookhaven Lab from 1982 until last September (now replaced by NSLS-II, which produces x-ray beams 10,000 times brighter). The team also used computational modeling to calculate how different kinds of reprogramming strands would alter the interparticle interactions, and found their calculations agreed well with their experimental observations.

"The ability to dynamically switch the phase of an entire superlattice array will allow the creation of reprogrammable and switchable materials wherein multiple, different functions can be activated on demand," said Gang. "Our experimental work and accompanying theoretical analysis confirm that reprogramming DNA-mediated interactions among nanoparticles is a viable way to achieve this goal."