Ocean Acidfication may have a Dramatic Affect on Marine Life

Oceans have absorbed up to 30 percent of human-made carbon dioxide around the world, storing dissolved carbon for hundreds of years. As the uptake of carbon dioxide has increased in the last century, so has the acidity of oceans worldwide. Since pre-industrial times, the pH of the oceans has dropped from an average of 8.2 to 8.1 today. Projections of climate change estimate that by the year 2100, this number will drop further, to around 7.8 — significantly lower than any levels seen in open ocean marine communities today.

Now a team of researchers from MIT, the University of Alabama at Birmingham, and elsewhere has found that such increased ocean acidification will dramatically affect global populations of phytoplankton — microorganisms on the ocean surface that make up the base of the marine food chain.

The researchers report that increased ocean acidification by 2100 will spur a range of responses in phytoplankton: Some species will die out, while others will flourish, changing the balance of plankton species around the world. 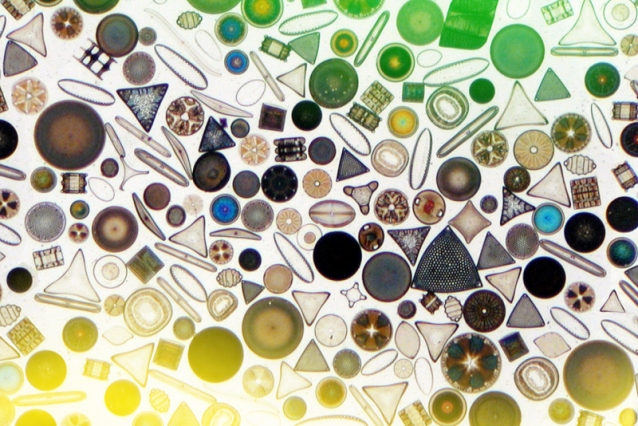 The researchers also compared phytoplankton’s response not only to ocean acidification, but also to other projected drivers of climate change, such as warming temperatures and lower nutrient supplies. For instance, the team used a numerical model to see how phytoplankton as a whole will migrate significantly, with most populations shifting toward the poles as the planet warms. Based on global simulations, however, they found the most dramatic effects stemmed from ocean acidification.

Stephanie Dutkiewicz, a principal research scientist in MIT’s Center for Global Change Science, says that while scientists have suspected ocean acidification might affect marine populations, the group’s results suggest a much larger upheaval of phytoplankton — and therefore probably the species that feed on them — than previously estimated.

“I’ve always been a total believer in climate change, and I try not to be an alarmist, because it’s not good for anyone,” says Dutkiewicz, who is the paper’s lead author. “But I was actually quite shocked by the results. The fact that there are so many different possible changes, that different phytoplankton respond differently, means there might be some quite traumatic changes in the communities over the course of the 21st century. A whole rearrangement of the communities means something to both the food web further up, but also for things like cycling of carbon.”

To get a sense for how individual species of phytoplankton react to a more acidic environment, the team performed a meta-analysis, compiling data from 49 papers in which others have studied how single species grow at lower pH levels. Such experiments typically involve placing organisms in a flask and recording their biomass in solutions of varying acidity.

In all, the papers examined 154 experiments of phytoplankton. The researchers divided the species into six general, functional groups, including diatoms, Prochlorococcus, and coccolithophores, then charted the growth rates under more acidic conditions. They found a whole range of responses to increasing acidity, even within functional groups, with some “winners” that grew faster than normal, while other “losers” died out.

The experimental data largely reflected individual species’ response in a controlled laboratory environment. The researchers then worked the experimental data into a global ocean circulation model to see how multiple species, competing with each other, responded to rising acidity levels.

The researchers paired MIT’s global circulation model — which simulates physical phenomena such as ocean currents, temperatures, and salinity — with an ecosystem model that simulates the behavior of 96 species of phytoplankton. As with the experimental data, the researchers grouped the 96 species into six functional groups, then assigned each group a range of responses to ocean acidification, based on the ranges observed in the experiments.

After running the global simulation several times with different combinations of responses for the 96 species, the researchers observed that as ocean acidification prompted some species to grow faster, and others slower, it also changed the natural competition between species.

“Normally, over evolutionary time, things come to a stable point where multiple species can live together,” Dutkiewicz says. “But if one of them gets a boost, even though the other might get a boost, but not as big, it might get outcompeted. So you might get whole species just disappearing because responses are slightly different.”

Dutkiewicz says shifting competition at the plankton level may have big ramifications further up in the food chain.

“Generally, a polar bear eats things that start feeding on a diatom, and is probably not fed by something that feeds on Prochlorococcus, for example,” Dutkiewicz says. “The whole food chain is going to be different.”

By 2100, the local composition of the oceans may also look very different due to warming water: The model predicts that many phytoplankton species will move toward the poles. That means that in New England, for instance, marine communities may look very different in the next century.

“If you went to Boston Harbor and pulled up a cup of water and looked under a microscope, you’d see very different species later on,” Dutkiewicz says. “By 2100, you’d see ones that were living maybe closer to North Carolina now, up near Boston.”

Dutkiewicz says the model gives a broad-brush picture of how ocean acidification may change the marine world. To get a more accurate picture, she says, more experiments are needed, involving multiple species to encourage competition in a natural environment.

“Bottom line is, we need to know how competition is important as oceans become more acidic,” she says.

The enormous challenges that remain in doing clean-up on land in Japan following the Fukushima Daiichi Nuclear Power Plant disaster in 2011, even as some progress has been made offshore, are described.

END_OF_DOCUMENT_TOKEN_TO_BE_REPLACED

A new electrocatalyst has been discovered that converts carbon dioxide (CO2) and water into ethanol with very high energy efficiency, high selectivity for the desired final product and low cost.

END_OF_DOCUMENT_TOKEN_TO_BE_REPLACED

Mussels Are Loosening Their Grip in Iron-Deficient Water