A recently published study shows that a newly studied class of water contaminants that is known to be toxic and hormone disrupting to marine animals is present likely due in part to indirect effects of human activity. The contaminants are more prevalent in populated areas in the San Francisco Bay, suggesting that human impacts on nutrient input or other changes in water quality may enhance natural production.

The study by an international team of researchers was led by the University of Minnesota. Collaborators on the project include the San Francisco Estuary Institute, Science Museum of Minnesota’s St. Croix Watershed Research Station, ETH Zurich, and Pace Analytical. 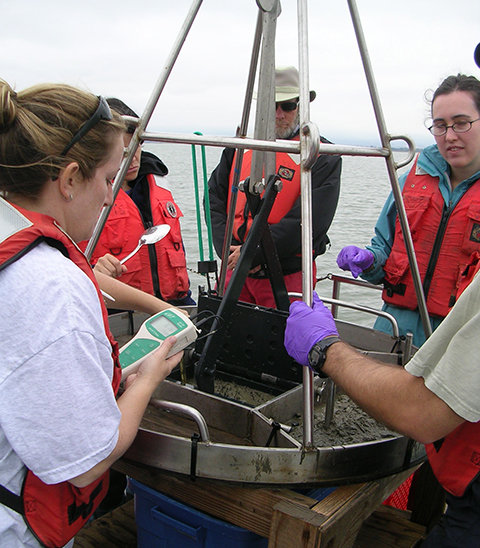 The contaminants studied are hydroxylated polybrominated diphenyl ethers (OH-BDEs) and are found around the world from the U.S. to Sweden to China. Recent evidence shows that the production of OH-BDEs occurs naturally from marine bacteria and algae. Levels of these chemicals have been increasing over time and have been detected in Baltic salmon, polar bears, bald eagles and human plasma. Previous studies have shown disruption of thyroid function and neurological development due to OH-BDEs.

“Even though OH-BDEs are produced naturally, it shows that natural does not equal safe,” said lead researcher William Arnold, a professor in the University of Minnesota Department of Civil, Environmental and Geo- Engineering. “We need to find out why they are increasing.”

The researchers looked at whether there might be a tie to flame retardants used extensively since the 1970s called polybrominated diphenyl ethers (PBDEs). Manufacturing facilities, sewage/wastewater, and precipitation are all known sources of PBDE pollution. Researchers also analyzed the popular antibacterial agent triclosan, which is chemically similar to OH-TriBDE. Because the onset of production of triclosan and PBDEs followed a similar timeline, the researchers hypothesized that the study would indicate common human-related pollution as the cause of OH-BDEs.

From 2012-14, the researchers analyzed surface sediment and sediment cores in the San Francisco Bay, Point Reyes National Seashore and Minnesota lakes to determine a possible source for the increasing OH-BDEs. They found higher concentrations in San Francisco Bay compared to Point Reyes National Seashore, a marine system with limited human impact. They found no OH-BDEs in the freshwater lakes of Minnesota.

The findings suggest that higher nutrients and water temperatures in the urban area of San Francisco Bay may influence microbial activity and increase OH-BDE levels. Small amounts of OH-BDEs were detected in the less populated Point Reyes National Seashore area, which accounted for a normal level of natural production.

“We were surprised to find no OH-BDEs in the freshwater of Minnesota because flame retardants are used in Minnesota. This showed us that this is likely not the cause of OH-BDEs,” Arnold said. “But that’s not the end of the story. There were still more OH-BDEs in the populated areas of San Francisco Bay, which highlights the complicated nature of human activity and how it affects our aquatic systems.”