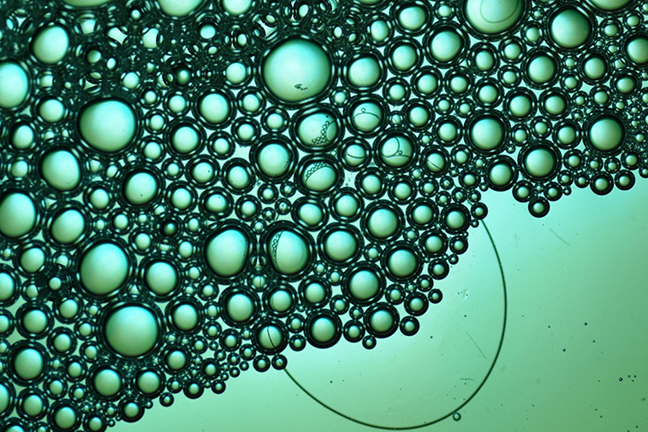 A team of researchers, led by the University of Minnesota, has invented a new soap molecule made from renewable sources that could dramatically reduce the number of chemicals in cleaning products and their impact on the environment.

The soap molecules also worked better than some conventional soaps in challenging conditions such as cold water and hard water. The technology has been patented by the University of Minnesota and is licensed to the new Minnesota-based startup company Sironix Renewables.

The new study is now online and will be published in the next issue of the American Chemical Society’s ACS Central Science, a leading journal in the chemical sciences. Authors of the study include researchers from the University of Minnesota, University of Delaware, University of Massachusetts Amherst, Sironix Renewables, and the U.S. Department of Energy’s Catalysis Center for Energy Innovation and Argonne National Laboratory.

“Our team created a soap molecule made from natural products, like soybeans, coconut and corn, that works better than regular soaps and is better for the environment,” said Paul Dauenhauer, a University of Minnesota associate professor of chemical engineering and materials science and a co-author of the study. “This research could have a major impact on the multibillion-dollar cleaning products industry.”

Conventional soaps and detergents are viewed as environmentally unfriendly because they are made from fossil fuels. When formulated into shampoos, hand soaps, or dishwashing detergents, these soaps are mixed with many additional difficult-to-pronounce and harmful chemicals that are washed down the drain.

Funded by the U.S. Department of Energy, researchers from the Catalysis Center for Energy Innovation developed a new chemical process to combine fatty acids from soybeans or coconut and sugar-derived rings from corn to make a renewable soap molecule called Oleo-Furan-Surfactant (OFS). They found that OFS worked well in cold water where conventional soaps become cloudy and gooey rendering them unusable. Additionally, OFS soaps were shown to form soap particles (called micelles) necessary for cleaning applications at low concentrations, which significantly reduces the environmental impact on rivers and lakes.

The new renewable OFS soap was also engineered to work in extremely hard water conditions. For many locations around the world, minerals in the water bind with conventional soaps and turn them into solid goo.

“I think everybody has had the problem of trying to get shampoo out of their hair in hard water—it just doesn’t come out,” said Dauenhauer.

To combat this problem, most existing soaps and detergents add an array of additional chemicals, called chelants, to grab these minerals and prevent them from interfering with soap molecules. This problem has led to a long list of extra chemical ingredients in most conventional cleaning products, many of which are harmful to the environment.

The new OFS soap eliminates the hard water problem by using a naturally derived source that does not bind strongly to minerals in water. The researchers found that OFS molecules were shown to form soap particles (micelles) even at 100 times the conventional hard water conditions. Thus, a cleaning product’s ingredient list could be significantly simplified.

“The impact of OFS soaps will be greater than their detergent performance,” said University of Minnesota chemical engineering and materials science graduate student Kristeen Joseph.  “OFS is made from straight carbon chains derived from soybeans or coconut which can readily biodegrade. These are really the perfect soap molecules.”