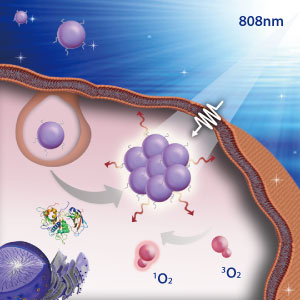 Microscopic drug molecules could soon be sent into the body to fight disease and their journey tracked using photo-acoustic imaging, after researchers developed a smart material that can locate and image cancer sites inside tissues.

A team from the A*STAR Singapore Bioimaging Consortium and Nanyang Technology University has developed a ‘nano-photonics platform’ that measures changes in the local tissue environment at the site of a tumor or cancer, by measuring enzyme reactions specific to the cancer.

This nano-photonics platform includes a promising compound for increasing the contrast of photo-acoustic images, which allows imaging of tissue in vivo.

“Nanomaterials have been recognized as promising platforms for the battle against many urgent health concerns including cancer, cardiovascular and neurodegenerative diseases,” say lead researchers Malini Olivo from A*STAR and Xing Bengang from NTU.

“However, a critical challenge remains in designing targeted nano-platforms that are capable of selectively localizing at the specific diseases; in particular, tumor sites for early-stage diagnosis and effective treatment,” explains Olivo, who says their new work addresses this challenge.

“These developments have the potential to improve diagnostics and allow for the development of therapies that can be delivered at the cell level, leading to fewer side effects,” says Olivo.

Previously direct targeting of diseased cells had used ligands (or molecules) to bind nanoparticles to a cell with the complementary receptor.

However, Olivo says the inability of the ligand to differentiate between normal and tumor cells was a flaw in the strategy. A key to the latest innovation is that the nano-photonics platform is adapted to respond to a tumor-specific enzyme and then accumulate at that site.

The accumulation of the nano-photonics platform improves the effectiveness of light treatments that kill cancer cells, such as photodynamic therapy and laser irradiation, and opens the possibility of inhibiting tumor growth through injection of nanoscale smart drugs.

Nanostructures also have the potential to penetrate pores in the lining of blood and lymphatic vessel walls allowing the nanostructures to more effectively target and accumulate into the diseased region.

Olivo says their approach could be expanded into other areas of nanomedicine, opening “new doors for selective and precise theranostics in future clinical applications”.