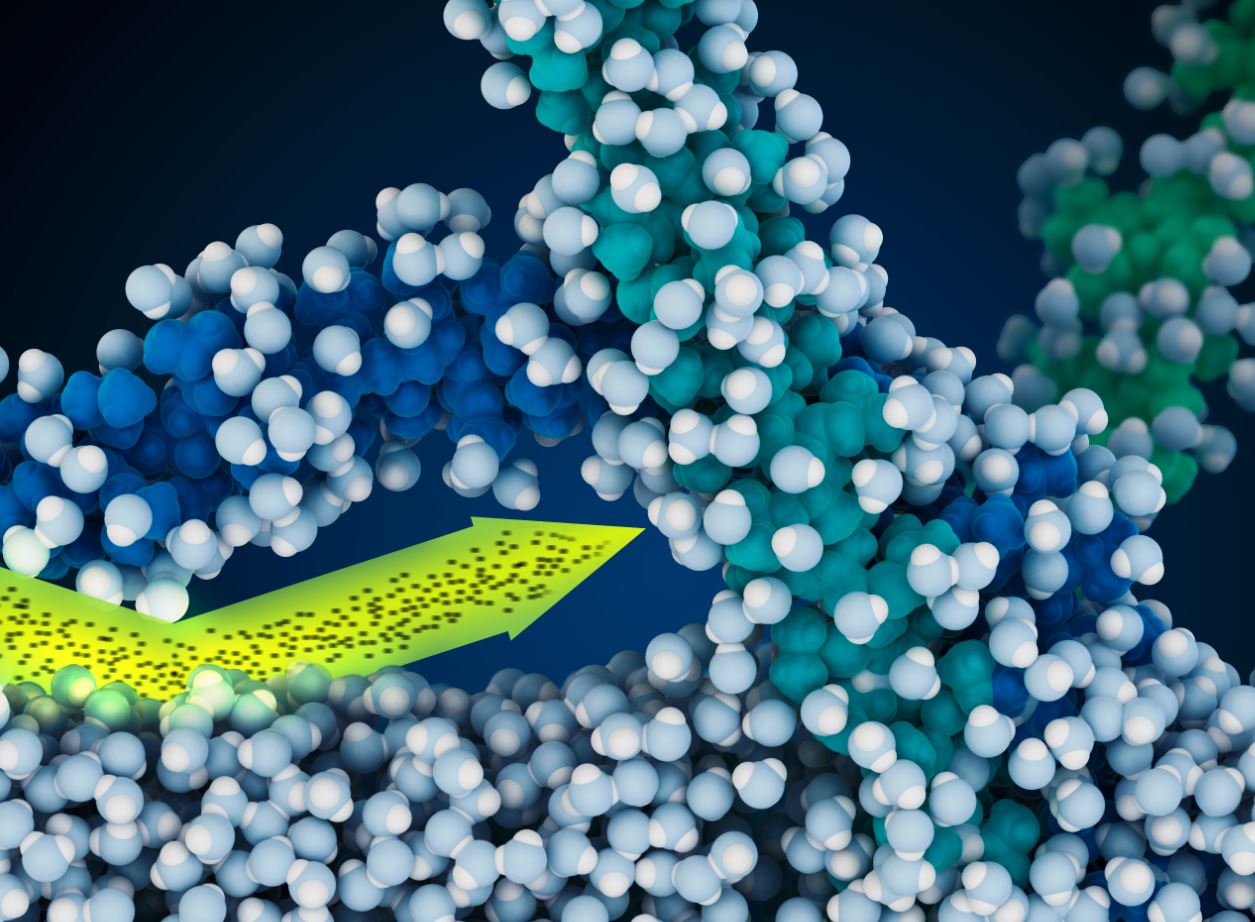 Gels are materials that are present in many everyday products such as shampoos, sunscreens and food gelatin among many others. They are formed by mixtures in which large amounts of liquid, usually water, are confined within a flexible network of polymer chains or colloidal particles. Among the different types of gels, all with different properties and applications, nanogels are sub-micrometer sized cross-linked polymer particles that can carry or incorporate macromolecules in their network structure. This property, coupled with their ‘soft’ character and the ability to introduce stimuli-responsive characteristics, means that they have many attractive applications, including within pharmaceuticals, in particular drug delivery. A new study published in Nanoscale by an international team of scientists from Queen Mary University of London (QMUL, London*) and the Institut Laue-Langiven (ILL, France**) provides important missing information into the behaviour of nanogels at interfaces, and may lead to a more patient and user-friendly drug administration route than current methods.

Nanogels based on NIPAM (N-isopropylacrylamide) are considered to be ‘smart’ or ‘switchable’ materials because of the fact that they undergo a phase transition at a critical temperature close to that of the physiological temperature – the normal human temperature of 37°C. This means that they have the potential as an intelligent drug delivery vehicle where the release of an active agent or drug can be triggered by changes in temperature. This can be used by simple contact, for example, in transdermal delivery systems via our skin. The development of such systems based on polymers requires a better understanding of the complex dynamic structure of such nanomaterials and currently there is a lack of experimental data about how these materials actually behave at interfaces.

Neutrons are the ideal tool to investigate the microscopic structure of nanogels, thus helping to understand how their properties can be controlled. In particular, neutron reflectometry is the technique of choice for the study of surfaces and interfaces. As such, the ILL reflectometer FIGARO was chosen as the principal experimental platform for this study.

The QMUL–ILL team used NIPAM-based nanogels synthesised with different percentages of MBA (N,N′-methylenebisacrylamide) as a cross-linker in the range 10–30%, and characterised them at human physiological temperature. Detailed structural studies of these systems on a molecular length scale have not been attempted before now.

In this work, it was shown that a large conformational change for the nanogels occurs at the air/water interface. The three-layer model has been found to describe these systems at the surface; a first densely packed collapsed layer in contact with air, a second layer of solvated polymer and a third layer of diffuse polymer chains extending into the bulk solution. This study also provides the first experimental evidence of structural changes of nanogels as a function of the degree of cross-linking at the air/water interface.

As the percentage of cross-linker incorporated in the nanogels was increased, more rigid matrices were obtained and the amount of adsorbed nanogels increased. The non-equilibrium nature of these systems

means that it is not possible to apply a normal surface tension analysis to estimate the amount at an interface. Instead neutron reflectivity measurements with isotopic contrast variation provide a sensitive means to determine the adsorbed amount. It also allows the changes in the volume fraction of nanogels at the interface to be followed with time as more and more material reached the interface. The technique also highlights changes in conformation which is important in relating the structure-to-function for this class of materials. Because neutron interactions vary in an irregular fashion with atomic numbers (i.e. different isotopes), the technique allows different aspect of the structure to be highlighted using isotropic substitution. The analysis of measurements recorded in different isotopic contrasts leads to resolution of complex structures.

FIGARO is a neutron reflectometer at the ILL that is optimised for measurements at free liquid surfaces. It is a versatile instrument, which in its six years since commissioning has already generated more than 70 peer reviewed publications. It has a high intensity configuration for dynamic measurements as materials assemble at interfaces, which was exploited in this research, as well as the ability to record data over a broad dynamic range required to resolve diffuse interfacial structures.

Dr Richard Campbell, the ILL’s first responsible scientist on the FIGARO instrument, said: “Surface tension measurements are most sensitive to the material assembled right at the air surface while the penetrating power of neutron reflectivity results in sensitivity to more diffuse structures. This structural study was possible due to the ability to carry out fast measurements of the dynamic interfacial assembly as well as more detailed measurements to access the diffuse structures present in the nanogels using an optimised high intensity configuration of FIGARO.”

The neutron reflectivity and volume fraction profiles can be seen in the Figure. Three distinct regions of the surface structure with respect to the depth are shown. There is a first layer in contact with the air that is rather dense with a volume fraction of about 60% followed by two more gradually diffusing layers. Interestingly, the content of water in the first layer increases with amount of MBA – this can be attributed to a reduction in the ability to change conformation (and thus repel water from polymer network) of the gels with a higher degree of cross-linking.

The structural data also suggest an extensive rearrangement of the conformation of the nanogel particles at the interface during the adsorption process, resulting in structural deformation – the degree of deformation diminishes with increasing percentage of cross-linker. Although the differences in conformations between the bulk and the liquid/liquid interface for NIPAM-based microgels have been previously hypothesised, this study is the first to provide experimental supporting evidence.

Dr Ali Zarbakhsh, of QMUL’s School of Biological and Chemical Sciences said: “The data presented provide important missing information into the behaviour of gel particles at interfaces. We believe that they may lead to achievement of the rational, smart design of novel materials for specific applications. Our research, combined with the insight gained from additional studies on related systems in the future, may lead to a promising platform that has the characteristics of a more patient and user-friendly drug administration route than current alternatives.”