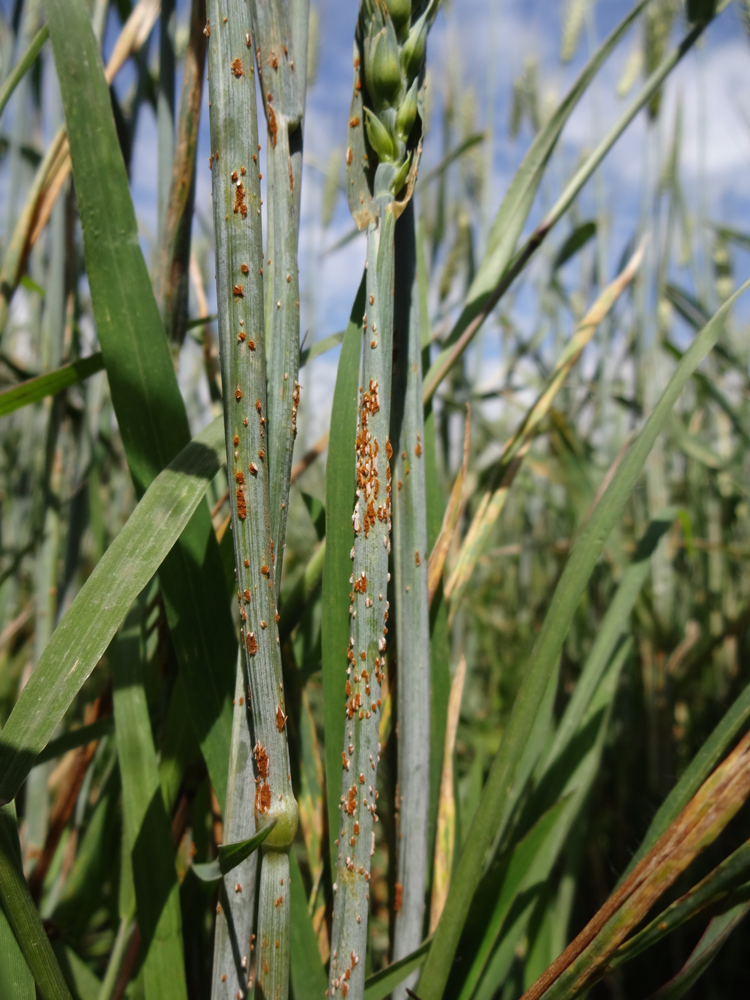 Working with fellow scientists at TSL, Dr Brande Wulff from the JIC developed the new technology called ‘MutRenSeq’ which accurately pinpoints the location of disease resistance genes in large plant genomes and which has reduced the time it takes to clone these genes in wheat from 5 to 10 years down to just two.

Effective use of these resistance genes in wheat could increase global yields and vastly reduce the need for agro-chemical applications.

A resistance gene acts like a simple lock keeping the pathogen from infecting the plant. Over time, as many breeders and growers have found, pathogens can adapt to overcome an individual resistance gene and infect the plant. A stack of multiple genes acts like a multi-lever lock, making it much harder for new pathogens to evade the crop’s defences.

“The challenge has always been finding enough resistance genes to create an effective multi-gene ‘stack’ against virulent pathogens like wheat stem rust and wheat yellow rust which, if left unchallenged, can decimate crops across the world. With the advent of this new technology, the development of a new variety of wheat with strong resistance to one or more of these pathogens is now within reach.”

Dr Wulff collaborated with Drs Evans Lagudah and Sam Periyannan at CSIRO Agriculture in Australia, who had used a chemical (EMS) to cause mutations in the genomes of a sample of resistant wild type wheat plants. They then screened the mutant population by infecting it with the pathogen, to identify mutants that were no longer resistant.

The hypothesis was that these mutants would all share mutations in a common gene, which must be the resistance gene. They compared the sequences of the mutants to one another and looked for the overlap. Sequencing one mutant will identify several hundred mutations - each mutation indicating a candidate gene.

However, by comparing two mutants to each other, and looking for the overlap, the list is reduced from a few hundred, to just a handful.

Comparing three or more mutants, enabled the team to identify an overlap of only a single gene in the susceptible wheat plants.

“With MutRenSeq we can find the needle in the haystack: we can reduce the complexity of finding resistance genes by zeroing in from 124,000 genes, to just a single candidate gene.”

In the first test run of MutRenSeq, Dr Wulff’s team successfully isolated a well-known resistance gene, Sr33, in a fraction of the time it had previously taken to do this by conventional breeding techniques. Following this success, the team then cloned two important stem rust resistance genes,Sr22 and Sr45, which scientists have until now, been unable to isolate successfully.

According to the UN Food & Agriculture Organisation (FAO) wheat is grown on more land area than any other commercial crop (approximately 240m hectares) and continues to be the most important food grain source for humans.

Farmers in the west rely on pesticides to control pathogens in wheat but fewer and fewer agrochemicals are available for use due to concerns over their environmental impact. Farmers in poorer countries have little or no access to these chemicals and are highly vulnerable to disease-related losses, which can lead to hunger and malnutrition.

The UN Food and Agriculture Organization (FAO) estimates that 31 countries in East and North Africa, the Near East, Central and South Asia, which account for more than 37 percent of global wheat production area and 30% of global production, are at risk of wheat rust diseases including the Ug99 race of stem rust and Yr27 strain of yellow rust.

An alternative to pesticide-use is to build resistance into the crop by introducing resistant genes from other varieties of wheat into elite varieties.

“Finding and cloning these crucial genes has up until now been like looking for a needle in a haystack. The wheat genome is huge and contains many repeats.  This new technology will transform this part of the scientific process.

“Though the next stage of stacking large numbers of genes correctly in the complex wheat genome is not easy and may take time, the advent of this new gene-detecting technology has brought the creation of one or more new elite varieties of wheat with long-awaited durable disease resistance much closer.”