Current spectroscopy methods require large laboratory machines to measure chemical reactions, but the new technique uses a nanoelectronic chip to do the same thing while the reactions are taking place — which previously was very difficult — with better accuracy, and while gathering a completely new set of data.

Being able to analyze these reactions with increased accuracy, heightened sensitivity and greater cost-effectiveness will vastly improve scientists’ understanding of nanocatalysts, which will enable the development of new environmentally friendly fuel cells that are more efficient, more durable and less expensive to produce. Eventually, those new fuel cells could be used to power vehicles that run on hydrogen, the 10th most abundant element on Earth, and give off water as exhaust. 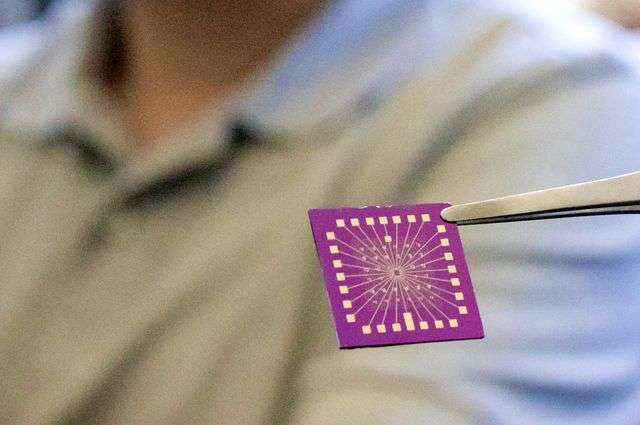 Fuel cells and hydrogen batteries are already an important source of green energy, and they are becoming more widely used as they become more powerful and efficient. But further advances will require scientists and engineers to better understand how energy technologies work and to more accurately measure the chemical reactions that make them function.

Of particular interest is gaining a better understanding of nanocatalysts, which facilitate electrochemical interactions with the materials on the devices’ surfaces at the nano level. (One nanometer is equal in distance to one-billionth of a meter, or about one ten-thousandth the width of a human hair.)

“Normally, spectroscopy is used for this kind of analysis,” Duan said. “But conventional techniques are difficult for in situ, or active, electrochemical studies. On-chip electrical transport measurements enable us to directly probe the electrochemical surfaces of metallic nanocatalysts while they are in action. This has allowed us to access a completely new set of information about electrocatalysts.”

The device’s tiny size is what enables scientists to study the reactions while they are taking place on the materials’ surfaces. It has given the UCLA team an unprecedented look at how and why nanocatalysts work or fail under certain conditions, and it has enabled vastly more accurate measurements and new insights into various electrochemical reactions.

The researchers hope the new data enables them to develop better nanocatalysts which, in turn, would lead to improved batteries and fuel cells.

“Now a single chip can detect signals we were unaware of before,” Huang said. “If we know exactly what happens at the surface of these materials, we can develop more efficient materials. Fuel cells are becoming more widely recognized as a powerful future technology, and nanocatalysts are the most expensive component, inhibiting widespread adoption of the technology. This new technique will help us understand and develop better and cheaper catalysts, allowing the technology to reach its full potential.”

Duan said the technique has many other potential uses. For example, the team already is using a similar approach to understand how certain microbes conduct electricity and efficiently convert chemical substrates into electrical energy.

The Viscometer and Its Role in the Food and Beverage Industry